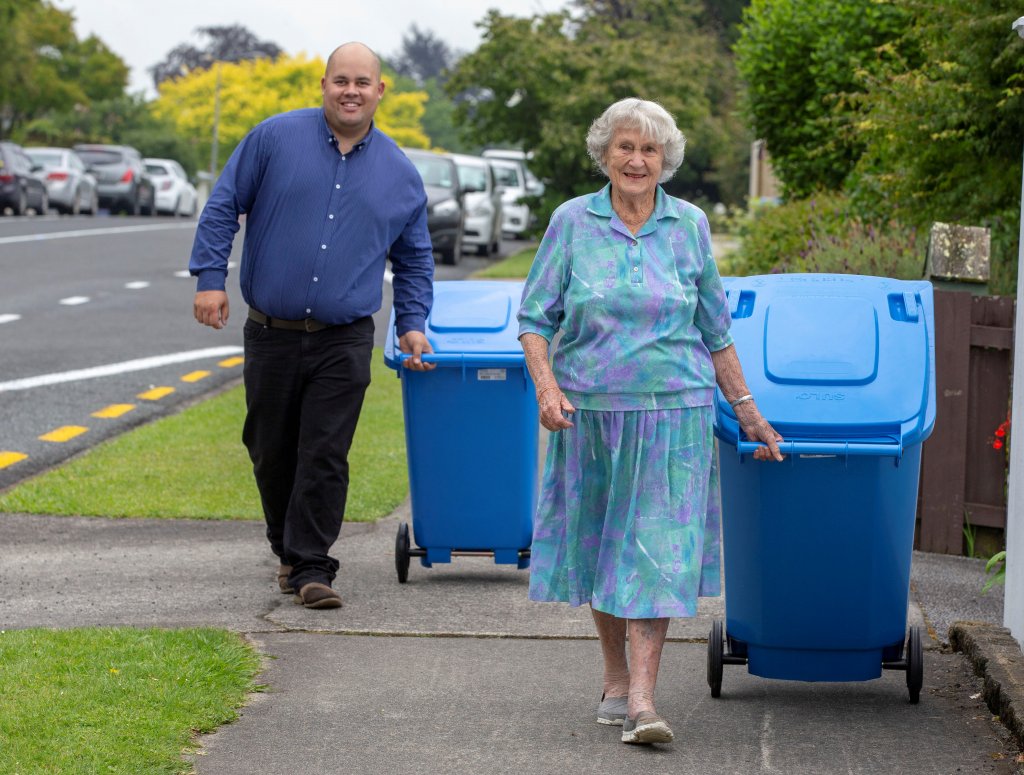 Waipa District Council team leader Cedric Crow and 87-year-old Waipā pensioner Patricia Daly take the new wheelie bins for a spin. The bins will be used for recycling throughout the district from July 2019.

Wheelie bins will replace blue recycling crates in in Cambridge from July 2019, but it will cost users more.

Each household around the Waipa district will receive two purpose-built wheelie bins; a smaller bin for glass, collected monthly, and a larger bin for plastic, tins, cans, paper and cardboard, collected fortnightly.

It means the council’s targeted recycling rate which funds the district-wide recycling service will increase. Council said the exact amount of the increase hasn’t been determined yet, but will be discussed with the community as part of next year’s Annual Plan process.

The price increase is being driven by the one-off cost of the wheelie bins, as well as the collapse of the international recycling market after China decided it would no longer accept New Zealand’s recycling.

“China’s decision has driven costs up right around the country, not just in Waipā. That is simply the reality and we have to deal with it,” Said council’s group manager – service delivery Barry Bergin. “Where Waipā’s targeted recycling rate lands will be part of the discussion during next year’s Annual Plan process.”

The new wheelie bins will service both rural and urban households with potential to extend the service into commercial and industrial premises.

Although details are currently being worked through, council also plans to offer a no-charge service for those residents unable to physically manage their bins.

Bergin said the wheelie bins were already successfully used in most other parts of New Zealand and were considered best practice.

“Many Waipā residents have been asking for wheelie bins for some time and their introduction was signalled in Council’s waste management strategy. Between now and when the bins arrive next year, we will be putting a lot of effort into communicating the change and how it will work. But I think most people will be pleased.”

As part of the contract, a brand new recycling sorting centre will be built in Te Awamutu, creating between 7-10 new jobs. This will not initially be open to the public, but that could change in the future.

Bergin said council will also continue to put a strong emphasis on community-based waste minimisation programmes, currently funded by the Ministry for the Environment and run by Council staff.

“We will continue to strongly encourage people to minimise their use of products like plastic and to think about how to reduce and reuse products before they even go into the recycling.”

More information about the new kerbside recycling service is available on Council’s website at www.waipadc.govt.nz/WheelieBins.