Trees gone, but not forgotten 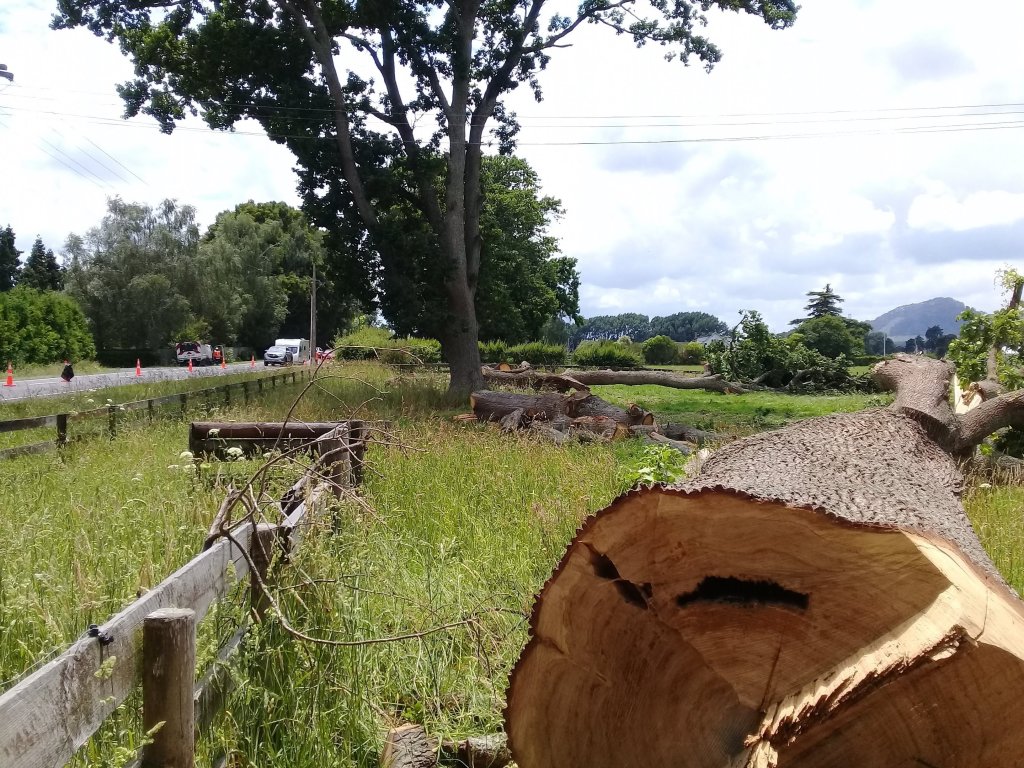 Four oak trees deemed hazardous to the public were felled on December 11.

Four trees over 100 years old were removed from the Cambridge landscape last month.

The iconic oak trees which line rural Victoria Rd, rumoured to have been planted between 1880 and 1900, were removed by Waipa Networks with the landowner’s permission after they were deemed hazardous. One tree which had also been identified as hazardous was left standing.

Waipa Networks Vegetation Supervisor Mike Hawker said the work was vital. “Waipa Networks appreciates the amenity value of mature trees however our priorities are public safety and the protection of the electricity network.”

The five trees lining 344 and 542 Victoria Rd were identified as encroaching the growth limit or notice zone as defined in the Electricity (Hazards From Trees) Regulations 2003, Hawker said.

“Trees growing within these zones are threat to the power lines and a public safety hazard. The trees in question were identified as a hazard during one of our surveys.”

Under the official tree regulations, power line companies are required to meet the cost of the first trim of hazardous trees, to clear them from the lines, and then it’s up to the tree owner to keep them from encroaching into the hazard zone. “If the tree owner does not wish to bear the cost of ongoing maintenance they can declare ‘no interest’ in the trees,” Hawker explained. “It then becomes the power line company’s responsibility for the costs of ongoing maintenance or, if they prefer they can remove the tree altogether.”

“In the case of these trees the owners had declared ‘no interest’ in the them so we chose to remove four out of five of them due to the ongoing threat they posed. The strongest most well-balanced English oak was left, as it appeared to be in good condition and not of the risk that the other four posed.”

Nearby resident Andrew Johnstone said he was horrified to see the old oaks being felled on December 11.

“I see these trees everyday and have until recently taken their continued presence for granted,” said Johnstone, whose family has owned land in the area since 1932. “Some dozen or so of these majestic oaks line our road frontage.

“A lack of legal protection and the rapid development taking place this end of Cambridge means the trees face an uncertain future, one I would personally like to change before it is too late. Heritage trees are an important part of our cultural identity here in Waipa and knowing that some of the most important examples have no protection is saddening.”

Johnstone said he had done some digging into the “unofficial” history of the oak trees, “information gleaned by me from old timers over the years,” he said.

“After the Waikato Land Wars government soldiers were given with small parcels of land that included the Fens (swampy land) to the north of Cambridge. Lacking the resources to break in the land, about all the soldiers sold their titles and the land was corralled into an estate that was named Fen Court. Local hearsay tells that the trees were planted by the proprietors. The estate didn’t survive the series of economic recessions that plagued the last few years of the 19th century and was repossessed by the government owned BNZ in 1901 and cut up into family sized farms.”

Though official records of the trees’ history are hard to find, they hold historic value, Johnstone said, and have become a valuable part of Cambridge for many locals.  “Their presence otherwise adds character to the district, that and a direct link to the past.”

Chairman Eric Todd said the Cambridge Tree Trust was “horrified” by the felling of the trees. “I can understand where the land owners come from, but it’s certainly not helping the Town of Trees.”

Eric said members of the Cambridge Tree Trust have been working with council to try and achieve better tree protection.