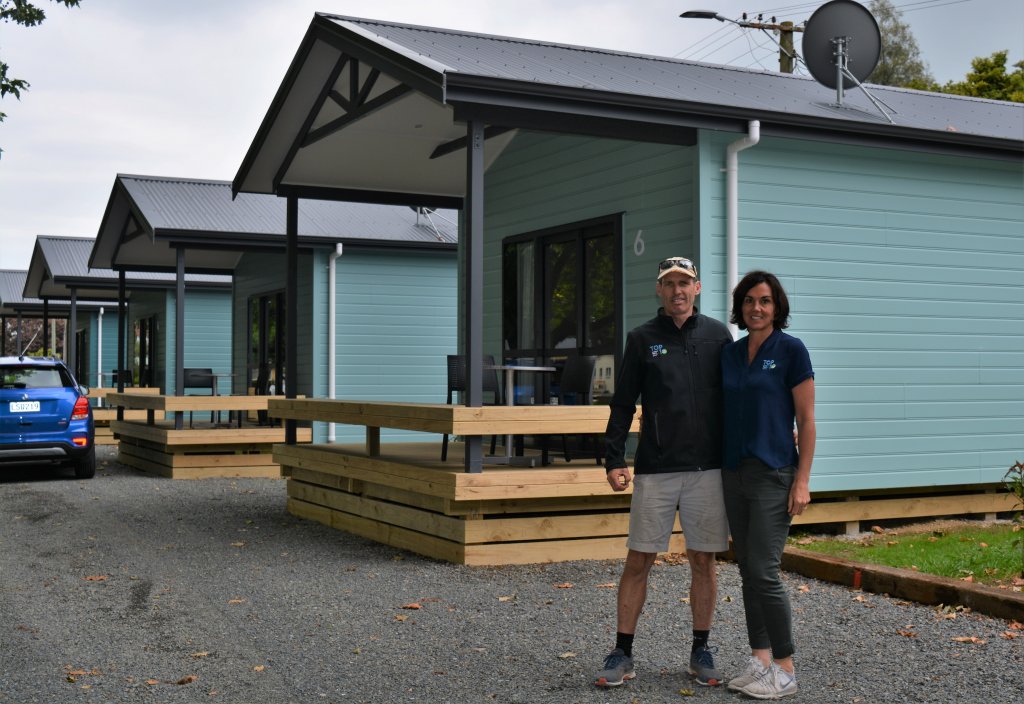 Five chic new units, all dressed in various shades of blue, make up some of the new additions Caron and Sean Steffert have brought to what is now the Cambridge TOP 10 Holiday Park in Leamington.

Turning a tired old campground into a sought-after destination has been something of a labour of love for Caron and Sean Steffert.

When the couple bought the one next to Leamington Domain on December 17, 2017, it was under-utilised as campgrounds go, barely capitalising on its well-positioned, tree-lined site in the heart of a popular destination. They also stepped right into a bit of a spat around how the changeover might affect several permanent residents who had long called the place home.

The Stefferts mustered every ounce of their extensive experience in running campgrounds and over the past 12 months have turned what is now the Cambridge TOP 10 Holiday Park into an upgraded and viable accommodation option for visitors.  Most of the permanent residents are happily relocated elsewhere and some novel ideas now in place at the park have made it a rarity in the region.

“Our vision was to create a park with a point of difference,” said Sean, “and we’re well on our way to doing that. We want this to be a campground that is an attraction for families and can accommodate the many groups that come to Cambridge for events.”

The couple have run a successful campground in the Coromandel for 20 years, one that became a TOP 10 park about a decade ago. All the while, they travelled to and from Cambridge while their kids were at school here, often staying in the local campground. Discovering it was to be sold was something of a ‘dream come true’, they say.

“We already had a good knowledge of Cambridge, of what was and wasn’t working with the park,” said Caron. “Now, we run both parks … most of our efforts in the past year have been here in Cambridge, working to get it to where we want it.”

They smartened up the grounds, neatened the trees, planted more hedging for increased privacy, put in hard sites for campervans, popped in a hugely popular ‘jumping cushion’ at the top of an area being kept clear for kids and family entertainment, gave existing cabins and communal buildings some smart upgrades, and boosted available bed numbers.

New down one side are five stylish self-contained units that have just come on stream. The Stefferts designed them along similar lines to cabins they incorporated in Coromandel, then had them built in New Plymouth and transported here just weeks ago. There is also a new 24-bed self-catering block for groups, already booked out by those coming into town for the Cambridge Regatta.

There are many family-friendly opportunities the Stefferts hope to incorporate as they look to make the most of their first full summer as the park’s new owners. Taking advantage of neighbouring attractions is high on the list. They already offer tennis racquets to residents fancying a game at the courts over the fence, and adding a swimming pool is also on the ‘to do’ list for the next couple of years.

“We have plenty of plans, but will wait and see how this summer goes,” said Sean.