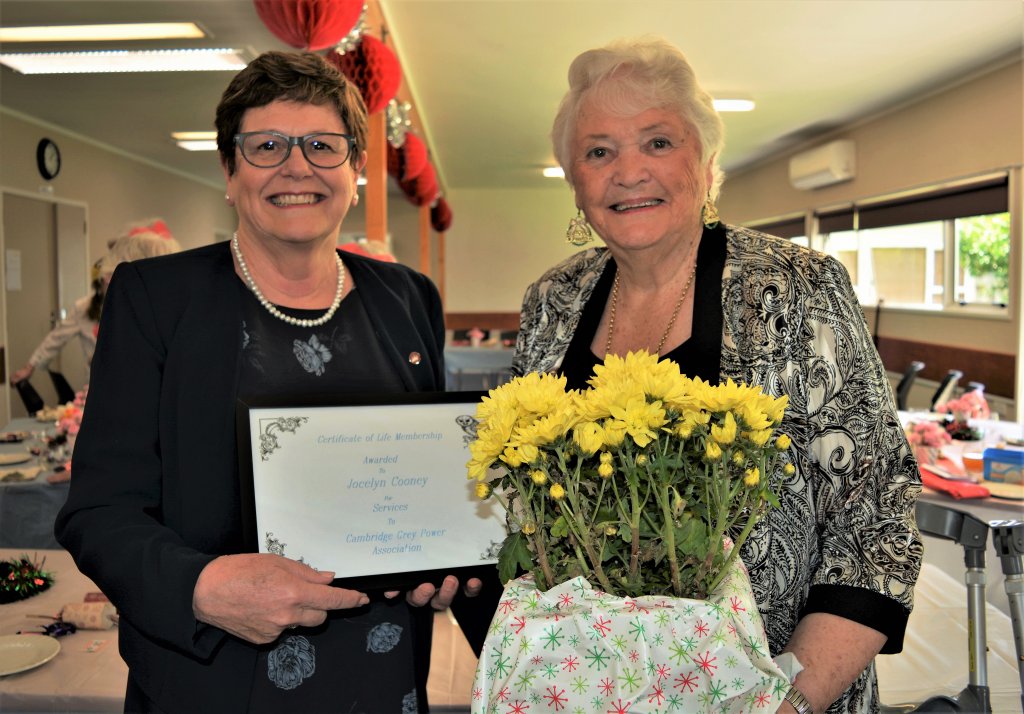 In accepting life membership from Cambridge Grey Power earlier this month, Jocelyn Cooney acknowledged the important work being done by the organisation.

A strong admirer of Grey Power’s advocacy for the welfare and wellbeing of those aged 50 and over, she said: “The fact it is a neutral organisation, with no political affiliation, makes it a very effective organisation, one with an assertive voice of influence in the political arena. There is no doubt it does a great job in representing its membership.”

Val told the more than 40 members present that Jocelyn had been associated with Grey Power Cambridge since its inception 23 years ago, and she was delighted to present the life membership certificate in honour of her services to the organisation.

“She has been good to us … always approachable and willing to give us her advice for free when it was needed.  She has allowed us to use her mailbox for our mail, and that helped us reduce our costs.”

Jocelyn said she was “very honoured” to have been recognised with life membership.

“When I think about all those years that have passed since I attended your first meeting … I could never have imagined then how I might be able to qualify for this organisation on my own merit.

“I see many older people who feel they have become invisible in society, people who no longer work and have nothing on which to hang their self-esteem. It is particularly difficult for those for whom national superannuation is their only income,” she said. “Housing continues to be a real issue, for both those owning their homes and having to meet costs such as rates and maintenance, and for renters who may feel they have little security of tenure.

“It is really good to see organisations like this advocating for such people, acting as their voice.  I am delighted to be part of such an organisation.”

Jocelyn’s service to the community was also honoured earlier in the year, when she was presented with a Queen’s Service Medal at Government House in Wellington on September 24.