Tamahere’s Isaac McHardie has claimed bragging rights over the rest of the world alongside NZ team mate William McKenzie after the pair won the 2018 Red Bull Foiling Generation World Champions in Miami over last weekend.

The pair were up against 15 other nations in what is the world’s largest youth sailing competition, where sailors aged 16-20 fly above the water in Flying Phantom catamarans. Held every two years, they were the second Kiwi crew to win the competition after Cambridge’s Micah Wilkinson and Napier team mate Olivia Mackay won it in 2016.

Launched as a way to introduce young sailors to the type of cutting-edge foiling technology used in the America’s Cup, it was only the second time the event has been held, making it a New Zealand-dominated world event with a local sailor on each winning crew. 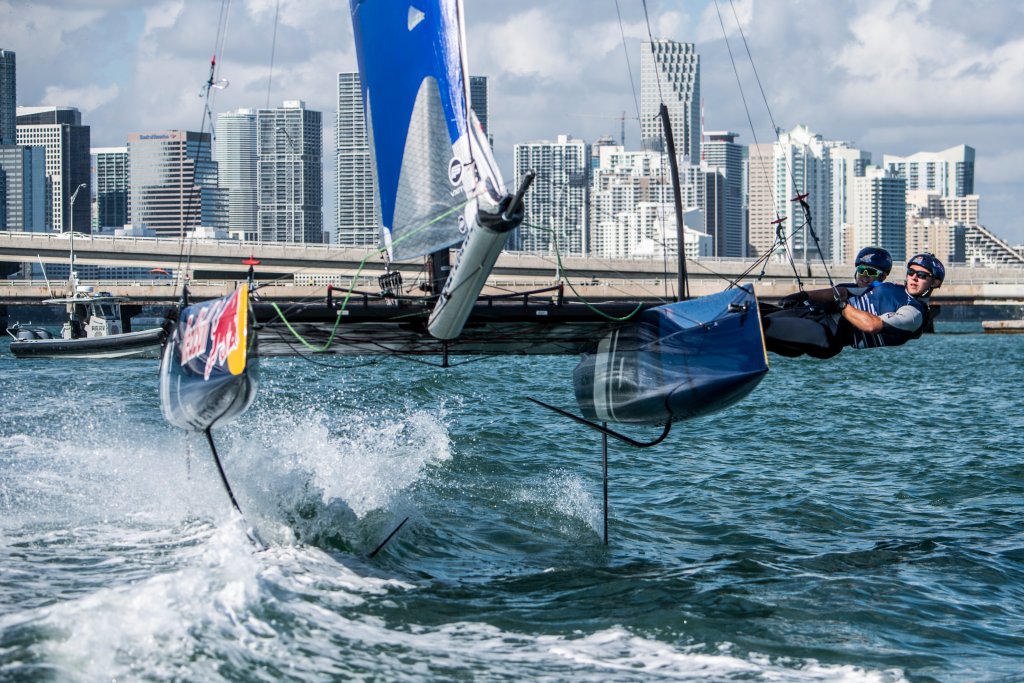 Isaac McHardie and William McKenzie in action in Miami on the Flying Phantom catamarans.

“It was the most unreal feeling flying through that finish line knowing we would be crowned world champions,” Isaac said. “Foiling these boats around a short course at extreme speeds against the world’s best is something I will never forget.”

Designed to find sailing’s next wave of talent, those who take part in the Red Bull Foiling Generation are coached throughout the process by two-time Olympic gold medallists and event co-founders and directors Roman Hagara and Hans Peter Steinacher, learning to sail the Flying Phantoms which can reach speeds up to 35 knots.

The ocean breeze held strong throughout the three-day competition in Miami over November 9 – 11 (US time), producing fourteen heats of fast, highly competitive sailing. The Kiwis won the final ahead of Belgium in second and Sweden in third. After exciting action in the early rounds, the final on Sunday saw all four Flying Phantom hydrofoil catamarans within centimetres of each other to the first mark. But the Kiwis put down their marker from the outset to lead from early on and triumph, despite capsizing just after the finish line.

“Every race was very competitive,” said Isaac’s Auckland team mate William, who sails with him in the Olympic 49er class. “The breeze picked up a bit, more than we’ve had in the past few days, and the boats were a lot faster, more out of control, but I think everyone here had a lot of skill.

“The 49er isn’t a foiling boat,” Isaac added, “so sailing the Flying Phantoms taught us skills in foiling and speed.”

The pair are now heading back to training in their 49er boat over the New Zealand summer to prepare for next year’s European season.