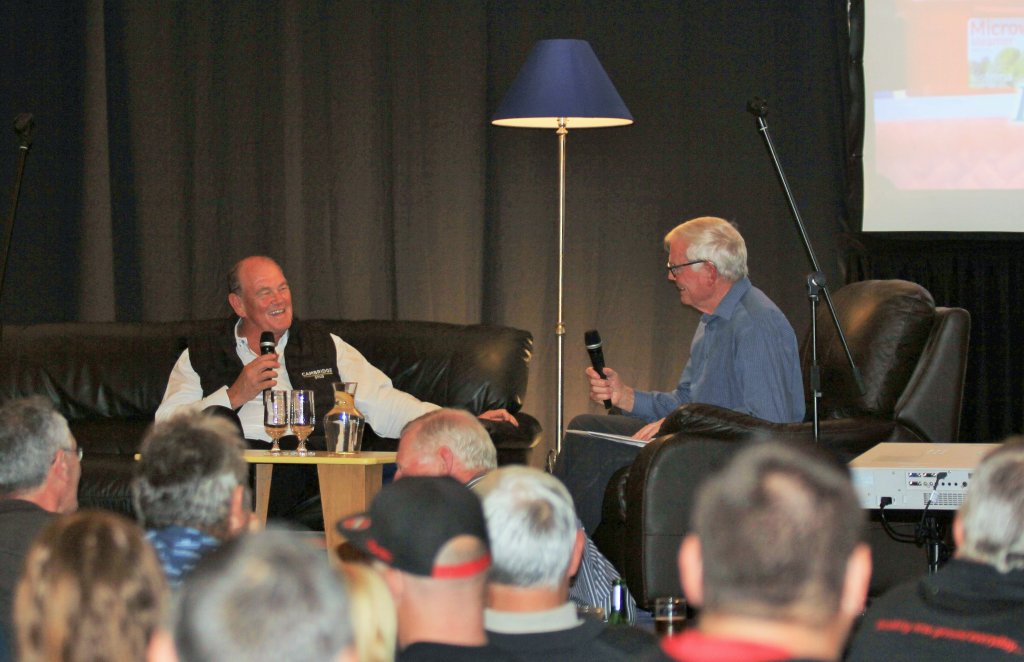 Conversation on the Couch at the Cambridge Town Hall last Sunday was a resounding success with well-known locals Brendan Lindsay, Richard and Olivia Loe, and Micah and Peter Wilkinson sharing their stories and successes to the crowd of around 180 people.

Aimed to establish seed funding for a Leamington community charitable trust, the event proved its worth in raising tens of thousands of dollars thanks to a successful auction made possible by generous donations from local businesses and individuals. A framed and signed 2008 All Blacks jersey was a big contender in the auction.

From a framed and signed 2008 All Blacks jersey to a team-signed rugby ball from the abandoned 1981 flour bomb game between the Springboks and Waikato, several big money items made the auction such a success, organised by David Finlay and initiated by event organiser Richard Myers and event MC David Wallace.

George Simon and Nathan Twaddle joined David in interviewing the special guests on stage in front of a packed Town Hall. Brendan spoke passionately about his support for New Zealand sports and business and gave insight into his plans for the future of Cambridge Stud and the journey it has taken him on. In front of his many old team mates from his time at the Leamington Rugby Club, he also went through a few team lists giving an appraisal of their performances. Olivia, rower and daughter of former All Black Richard Loe, related her experiences in rowing and the determination required to succeed, and her father gave a great perspective on his playing days and his role in supporting his children’s sporting activities.

World champion sailor Micah talked about his passion for the sport from his early days on local lakes to racing on the world stage, and his father Peter, a well-known Cambridge local, talked about the pleasure associated with following the sporting journeys of one’s children through success and failure. To get involved or help with the establishment of the Leamington community charitable trust, contact Richard Meyers on 0274 885 248. Around 180 people filled the Cambridge Town Hall for the Conversation on the Couch event.