John and Joan Hargreaves were presented with a special cake last year marking their 70th year with the Cambridge Brass Band. With them at that 2017 celebration is musical director Rob Hocking.

Jean and John Hargreaves are possibly the most embedded band members anywhere in New Zealand. They have been part of the Cambridge Brass Band for a staggering 71 years, and as long-time band patrons, neither one looks like stepping away from it any time soon.

John still plays The Last Post at funerals and other occasions, while Jean remains active in band affairs. Their pride in the band is evident, particularly when it comes to its invitation to France to perform at this month’s centenary commemorations around the liberation of Le Quesnoy – the band’s first official overseas trip.

“That’s been a wonderful opportunity,” said John. “Everyone was so enthusiastic about it – right from the kiddies to the older members. There’s a great atmosphere in the band now, everyone is really enjoying it.”

The brass band was where Jean and John met as youngsters, mainly because family on both sides were already involved.  Band members formed a guard of honour at their St Andrew’s Church wedding in 1962, and four of their six children later played in the band.

Given the potential for annoying close neighbours with all that brass-centric practising, it’s probably just as well the Hargreaves’ lives have unfolded on the family farm on Cambridge’s fringe. It’s a delightful spot that was worked first by John’s grandfather – a bush ranger from Australia – and then by his father. It is also where John was born 80 years ago and where he and Jean raised their family. 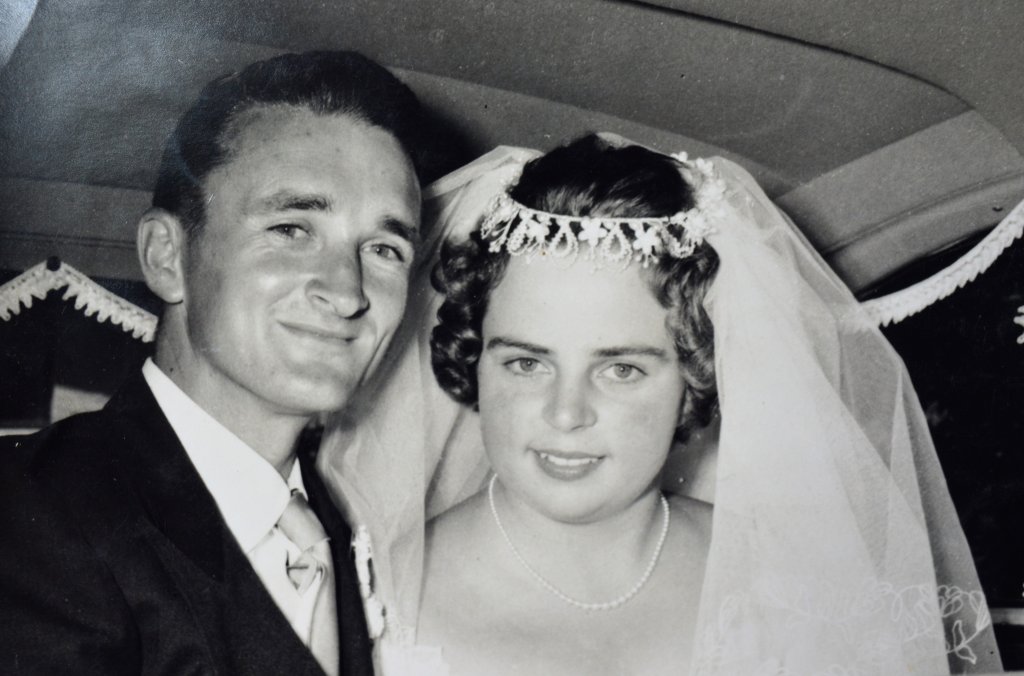 John and Joan Hargreaves were presented with a special cake last year marking their 70th year with the Cambridge Brass Band. With them at that 2017 celebration is musical director Rob Hocking.

While John attended school in Hamilton, his Whitiora-born future wife was growing up in Cambridge’s Bowen Street.  John’s father and brother belonged to the band, as did Jean’s brother, while her dad was a committee member. “I used to go and listen when they were playing for the marching teams in Victoria Square,” said Jean.  “I loved it … I pestered my father for years to join.”

When she did, a young John Hargreaves couldn’t help but take notice.  “Jean was the first girl in the band … she had to wear a man’s uniform.”

John joined the band in 1947, aged just nine. He remembers taking trips with the musicians, sometimes sleeping on wooden stretchers with mattresses made from bags stuffed with leaves. When Britain’s King George VI died in February 1952, John played at a special remembrance event held outside the Hamilton Post Office – he was just 14.

The Hargreaves’ courtship didn’t always go as smoothly as their music. John was a bit of a motorbike fan who admits he did a fair bit of chasing Jean using that mode of transport. Jean’s mother, however, barred her daughter from riding with John, which meant they had to walk to town when they wanted to go to the pictures. Turns out Jean also knew John’s sister – coincidentally, another Jean.

“When we got married, my dad said: ‘Well, you’ve finally got yourself a pair of jeans’ … he was a dry old stick,” he laughed.

The Hargreaves have supported the band through good times and bad. They remember the many places that became the band’s ‘home’ until it finally settled into its current spot in Vogel St. It has meant a lot of work for them and the other band stalwarts – from fundraising to keeping track of the admin side of things – but Cambridge Brass has brought them both immense satisfaction over a richly-rewarding seven decades.