Going blue for the cause

A blue-themed BBQ outside AMI was just one of many events around town for Blue September, raising money and awareness for prostate cancer. 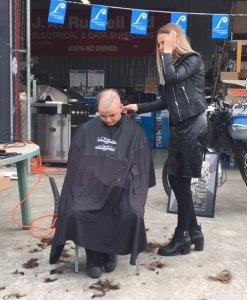 Jackson Lee from J A Russell went under the clippers to raise money for the Prostate Cancer of New Zealand and raised $670, smashing his fundraising target of $500.

The organiser of the barbie, Mark Cameron, painted himself blue in honour of the event and had his head shaved at the end.

Raising a total of $365 from the sausage sizzle and donations in the branch, the AMI barbeque added to a Cambridge total which is yet to be tallied, with a number of events taking place during September and number of registered ‘Blue Dos’ across the country up more than 60 per cent on last year.

Jackson Lee from J A Russell also put his locks on the line, raising $670 for the Prostate Cancer Foundation of New Zealand with a head shave and BBQ.

According to the foundation, one in eight men will develop prostate cancer in their lifetime, with one being diagnosed every hour in this country.

There are currently around 26,000 Kiwi men living with prostate cancer, with many of those being supported by the Prostate Cancer Foundation. Prostate cancer – signs to look out for

Symptoms to watch for include urinary problems, such as slow flow, stop/start, frequency, especially at night; blood in urine or semen; and bone pain, especially in the spine.

A recent survey showed 60 per cent of men had no symptoms when diagnosed, which makes it even more important for men to get to the doctor for a check-up.