Collector’s window on days gone by 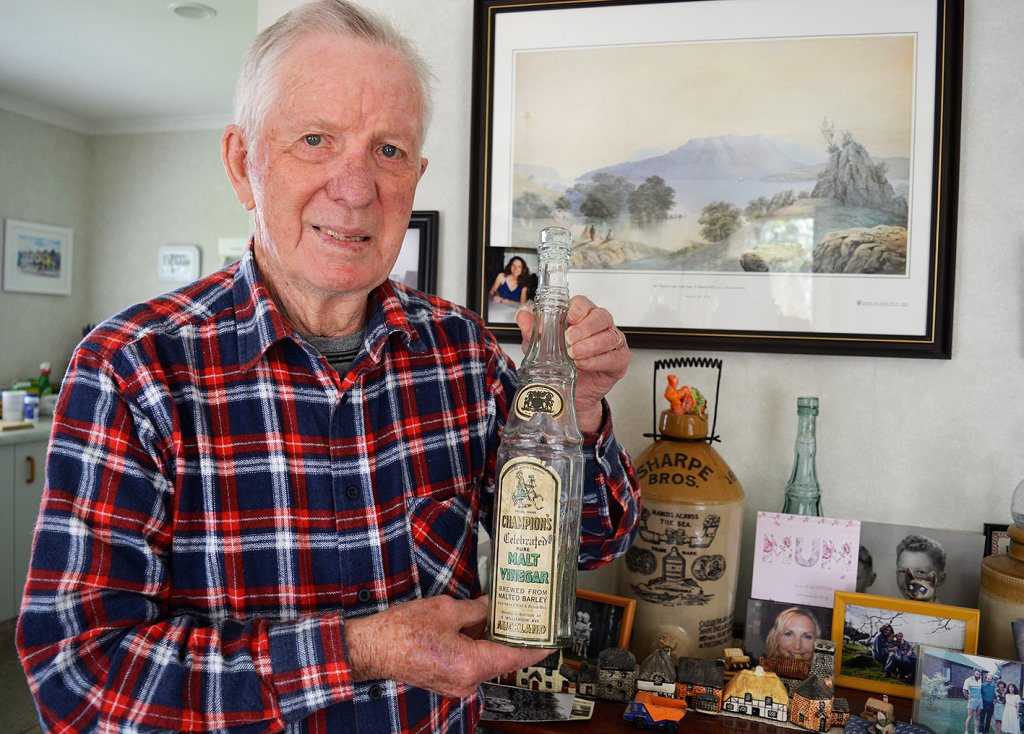 John Andersen with one of his collectible bottles – made all the more special for its label.

John Andersen’s kaleidoscope of tools, thousands of bottles and other items gathered over the past 60 years reflects much more than just six decades of enthusiastic collecting.

They are a shapshot of memories held dear by all of us … minutiae that includes things like the tiny wooden dome on which grandmothers darned socks, gramophone needles, bicycle valves, metal toy vehicles, waxed matches, a sandsoap mould … even boxes of chocolate-covered Brooklax.

Behind this labour of love is a delightful man in his late 80s, someone who has collected things throughout his life just because he “was always interested in old things”.

“It came into my head one day that these things ought to be collected for future generations – so I started doing it.”

That was over 60 years ago, shortly after he married his former schoolpal and Hamilton songstress, his late wife Elaine.

They both sang, as it happens, and John’s place as one of six boys born to a keen horseracing family meant the Waikato was a good place to remain. His great-uncle Charley Jenkins was one of the country’s top jockeys of his day, while John and three of his brothers were boxers in Hamilton. John also played league for the city’s Franklin Rovers; so, what with his work, his sport and helping Elaine raise their four kids, it’s remarkable that John had the time to do any collecting at all.

But he did, and the results now fill one room of his house and spill over into others. John says he was particularly lucky in that Elaine – who passed on a while ago – always supported his collecting. Bottles of all shapes and sizes fill an entire wall.

Each step tells a new story, and there are five extra banana boxes full of stuff he has no space to display.  On the wall there is a certificate labelling the home they built as “House of the Year”, there are 32 fascinating shaving mugs in the cabinet, historic photographs retrieved from skips or found at fairs or markets, and stacks of WW1 and 2 memorabilia. Everything is collectible, and much of it is valuable.

John has ribbons and a thick wodge of certificates from New Zealand antique fairs, most of them signifying awards his collection has gathered over the years.  “I still go to as many fairs and markets as I can,” he said, explaining how everything to be exhibited is carefully packed and transported for its day of public viewing. “And I still look out for anything that I can add to my collection. There is so much material out there.”

A recent fall resulting from answering an early morning door knock too quickly – a prank from a bunch of inconsiderate kids – left him in hospital with a blood clot on the brain and put an end to his driving days. That was a body blow for him.

“But I have family around who take me to the fairs and markets and take me out and about when I need to go anywhere. I’m very lucky like that.”

John hopes his collection will remain within the family over the coming years. He’s had expressions of interest from overseas collectors and others and knows it would have real value to museums. John with just some of the many certificates gathered for his collection over the years.