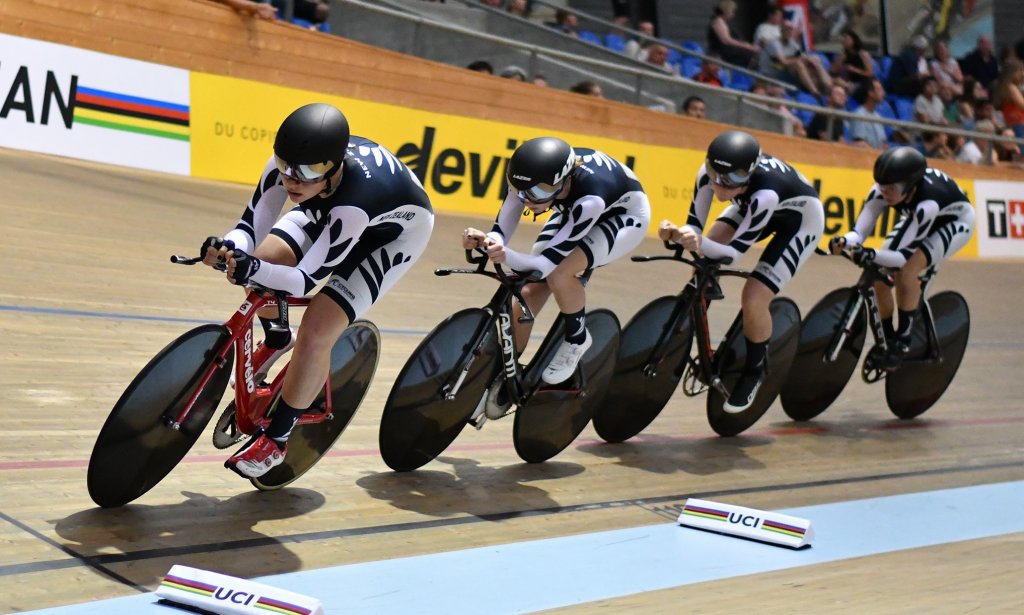 New Zealand’s team of cyclists competing at the UCI Junior Track Cycling World Championships in Switzerland returned home this week with two medals from their team pursuit finals, and several placings just off the podium.

The Kiwis saw both highs and lows over the five-day competition which wrapped up on Monday, topped off with gold and silver wins respectively by our male and female pursuit teams.

The first round of finals racing on day two saw the men’s quartet of Finn Fisher-Black (Cambridge), George Jackson (Waikato), Corbin Strong and Bailey O’Donnell claim gold over the French in the 4000m team pursuit, and the women’s quartet of Ally Wollaston (Cambridge), McKenzie Milne (Waikato), Annamarie Lippo and Sami Donnelly claiming silver over Australia – the fifth consecutive time the Kiwis have won the women’s team pursuit at the junior world champs.

“They produced two really good rides, particularly the effort against Australia,” said head coach Jon Andrews. “A key here has been the improvement in race-craft which is a direct result of the racing experience in the Subway Track Series that was established this year.” 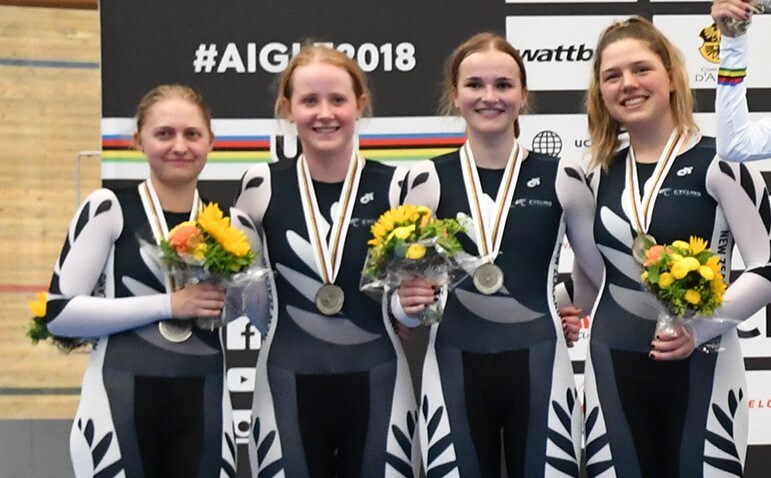 Despite being sick, Ally Wollaston (second from right) raced in the women’s team pursuit to earn silver. Photo – klementdesign / UCI.

Day three saw crashes and sickness plague the New Zealand team, with Ally Wollaston forced to withdraw from the omnium competition due to illness. Not to be defeated, she raced bravely in the scratch race in the morning to place seventh, and raced again to place 17th in the tempo. But unfortunately the 17-year-old St Peter’s student worsened throughout the day, forcing her withdrawal. That same day Waikato rider George Jackson crashed in the heats of the points race and was unable to continue, missing out on a place in the final.

But Cambridge’s Finn Fisher-Black managed to lighten the mood for the Kiwi team, finishing fourth in the individual pursuit. The 16-year-old pulled off a superb 3:14.921 effort qualifying for the 3000m individual pursuit, the fastest time ever by a New Zealander at the event. His teammate Jarred Treymane, another Cambridge local, clocked 3:21.602 to be 20th.

With Ally Wollaston out of the picture, Waikato rider McKenzie Milne paired up with Sami Donnelly for the first time to compete in the 20km women’s Madison, and unfortunately were among several teams that did not finish.

Cambridge local Ally Wollaston braved illness to compete in the scratch race of the omnium (pictured), but worsened throughout the day and was unable to race the final. Photo – klementdesign / UCI.

On the men’s side, the Kiwi pairing of Corbin Strong and Bailey O’Donnell were disqualified after being judged to have caused a crash in the qualifying race of the men’s Madison.

“The boys in the Madison were unfortunate in taking an aggressive line to avoid a less experienced rider but in doing so were deemed to have caused the crash,” said head coach Jon Andrews.

“They were going well at the time and were very disappointed with the decision.”

Earlier Jarred Treymane and Thomas Garbutt finished 16th and 17th respectively in qualifying for the 1000m time trial, where the winner Thomas Cornish from Australia set a new world record in 1:00.498.

“We have done well in the timed racing but our lack of competition in bunch racing has left us exposed a little,” said Andrews. “We have made strides this year with the new Subway Track Series but that will take time to reap more rewards.”