Gaslight show a trip in time The Gaslight Theatre’s latest show, Domestic Bliss, is certainly one for the ladies – though I’m sure men would enjoy it too. It looks at the lives of three women in different decades – the 50s, the 70s and the 2000s – showing their daily lives and the expectations that come with them.

The common denominator is that they’re all living in the same house, and when a sudden shift in space and time causes them to come together, hilarity initially ensues, followed by a heart-warming comparison and realisation of the differences between their realities.

Seeing the women together not only highlights the contrasts between themselves and their eras, but also, in my opinion, shows how each woman can learn from one another, with the values and differences of each era. 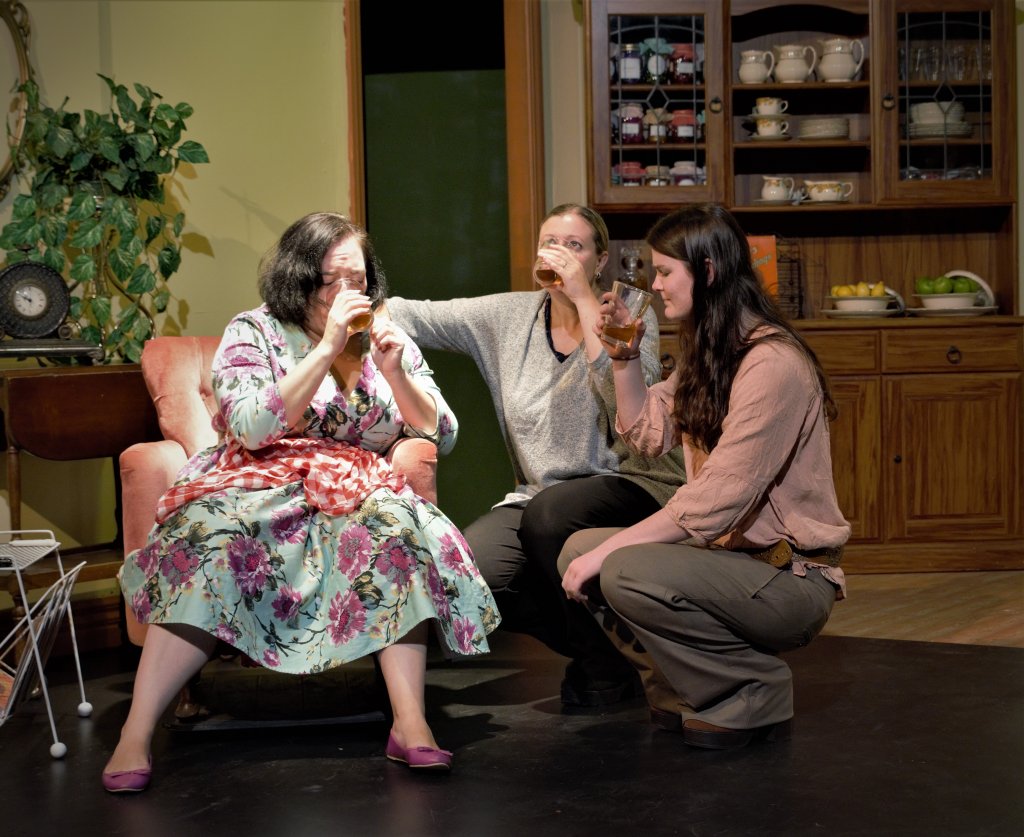 The characters’ sudden realisation of each other causes quite a stir. Photo – Peter Tait.

The 1950s-woman, Grace (Janine Swainson), learns a thing or two from the newly-empowered 1970s-woman Jackie (Rye Inglis), about taking pride and action in her creative flair, without worrying about her husband. And Jackie can learn a few things from modern woman Sarah (Jo Wadsley) about climbing the career ladder well beyond the first rung. In turn the two more modern women can learn a bit from Grace, too, about perseverance and dedication of motherhood, keeping a positive attitude when it comes to unavoidable chores, and picking up the many “old school” handy tips for kitchen and housework that seem to have been forgotten. Director Tracey Barlow said: “I kind of hope that … (audience members) walk out with the thought that things have changed, and why they’ve changed, how far we’ve come and how far we, as females, have still got to go.

“I love the fact that each (character) has their own identity and their acceptance of their particular era, but when they come together they inflict upon each other. And when they go back to their own lives, you can see how the modern times and the 70s and the 50s have all influenced each other in the way that they work forward.” The play, which is suitable for all ages, continues until September 15 (except September 10) kicking off at 7.30pm each evening. Dinner and show options are also available. Visit eventfinda.co.nz or Paper Plus Cambridge to secure your tickets.