Mike Pettit addresses the crowd during the dedication ceremony marking the completion of the fuel bunker restoration.

Joining the mayor and other guests at the event on September 3 were representatives of the family of Richard Edward Isaacs, who was killed at the site in 1943 when fire broke out and destroyed four huts in the early hours of October 14.

Possibly due to secrecy surrounding the location of the bunker, the Isaacs family had always thought Richard died at Trentham Military Camp near Wellington, so it was news to them when community board member Julie Epps tracked them down to invite them to Cambridge for last Monday’s dedication ceremony. Just 20 when he died, the fire was apparently caused by Richard smoking in bed, which great-nephew Tom Isaacs said was a lesson to everyone not to do that. 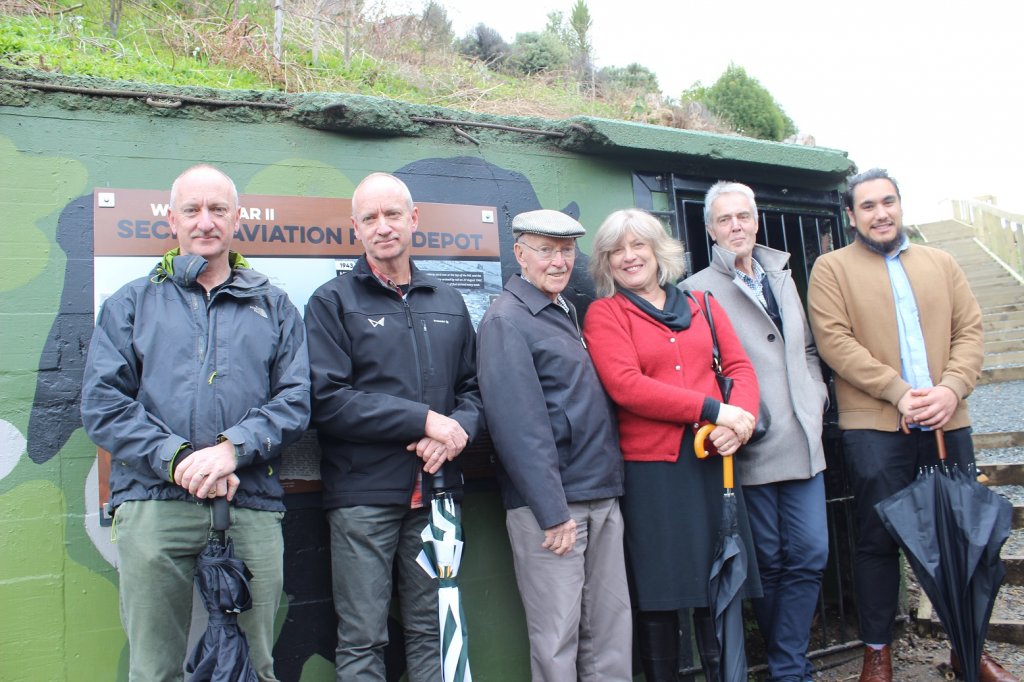 The family of Richard Edward Isaacs, pictured at the recent ceremony.

Community board chair Mike Pettit ran through the history of AR9, dispelling the myth that the pump house was a bomb shelter with a tunnel that ran to the town hall, providing an escape route for the mayor in case of an air raid. This idea got a joking thumbs up from Mayor Jim Mylchreest, however sadly for Jim it was an urban myth – the tunnel only runs 40 metres into the hillside to the fuel tank.

Mike thanked Merv Cronin, who took the restoration of the fuel bunker to the Cambridge Community Board for their consideration, as well as C&R Developments, Waipa Civil, local historian Dave Homewood, council’s community facilities manager Bruce Airey and the camouflage painters from the community board and Cambridge Primary School. A blueprint map of the AR9 area from the National Archives, showing position of the guardhouse, railway, and tank.