Students from St Peter’s School competed in the NIWA Waikato Science Fair on August 24, being recognised as Best School as well as receiving eight special prizes and 32 commendations.

Science-minded students at St Peter’s School have wowed scientists with their project boards at the NIWA Waikato Science Fair on August 24.

Teacher Alex Green said students were introduced to the science fair in mid-Term 1 and guided through to the end of Term 2 to get their project completed. “In terms of ideas, students were asked to think about their interests, whether it be a sport, food, or just things in their everyday life they had wondered about,” Alex Said.

For example, Year 8 student Connor Delaney studied kombucha and how leaving it for a long period would affect the alcohol content in the drink due to fermentation.

“He found the alcohol content exceeded that which is allowed to be sold to minors, when stored in certain conditions,” she said. Drinks must have less than 1.15 per cent ethanol content to be considered non-alcoholic which is why it is suggested that fermentation is stopped by storing kombucha in the fridge. 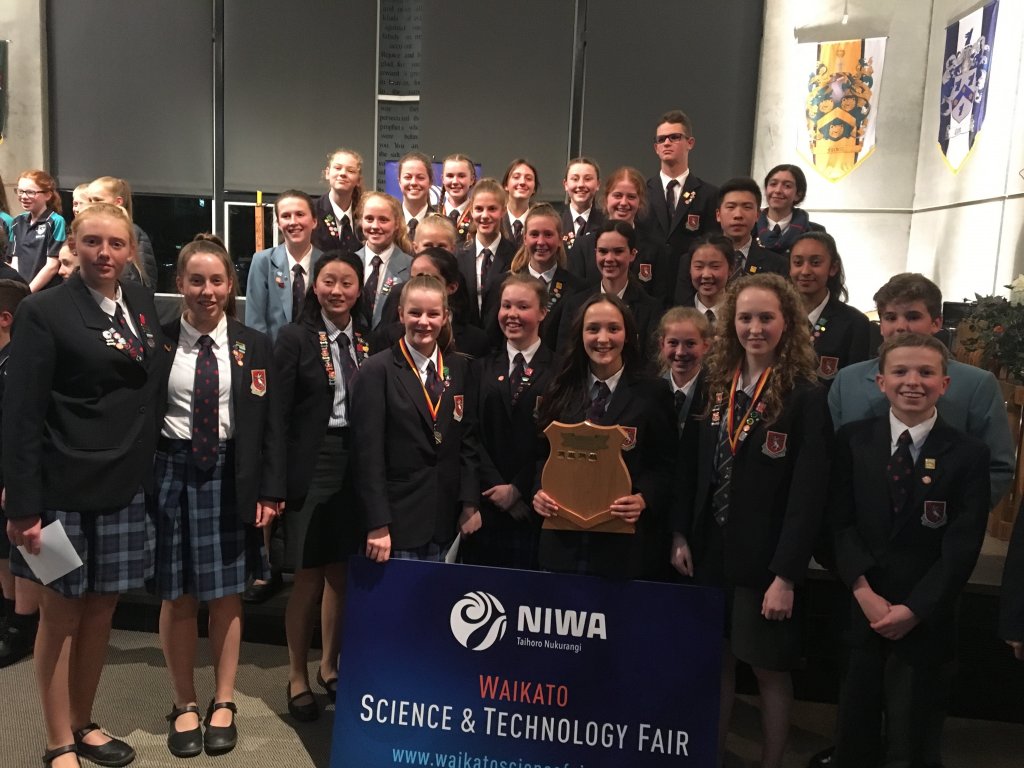 The students were all smiles after their success at the NIWA Waikato Science Fair.

Holly Christison, placed first for Best Year 11-13 and 2nd overall for Best in Fair with her project Sun-Shocked. Her project looked at the effect of solar radiation on the flow of a current in a wire. This gained her a work experience job at NIWA.

Alice Duncan and Archie Davidson placed first and second respectively for the category Year 9 – 10 Living World. Archie was also the runner-up for Best Year 10. Alice investigated the relationship between the angle of buttress roots of trees and their stability. She carried out a field study in the St Peter’s Kahikatea Stand as part of her project.

Rebecca Foley placed first in Year 9 – 10 Planet Earth and Beyond, and Tallula Rainger won the Year 9-13 Observational Drawing for her bee picture. She also received the NZ Soil Science Society Special Award for an outstanding exhibit relating to soil science.

Elizabeth Liu won the NIWA Special Award for an outstanding exhibit related to water and/or the atmosphere.

Laura Goodman and Maria Lee won the NZ Statistical Association Special Award for an outstanding exhibit that relates to conservation of NZ flora and fauna.

Grace Wisnewski won the NZ Baking Research Trust Special Award for the best use of flour or baker products in a food-related product.