Woodlock aims to end season on a high 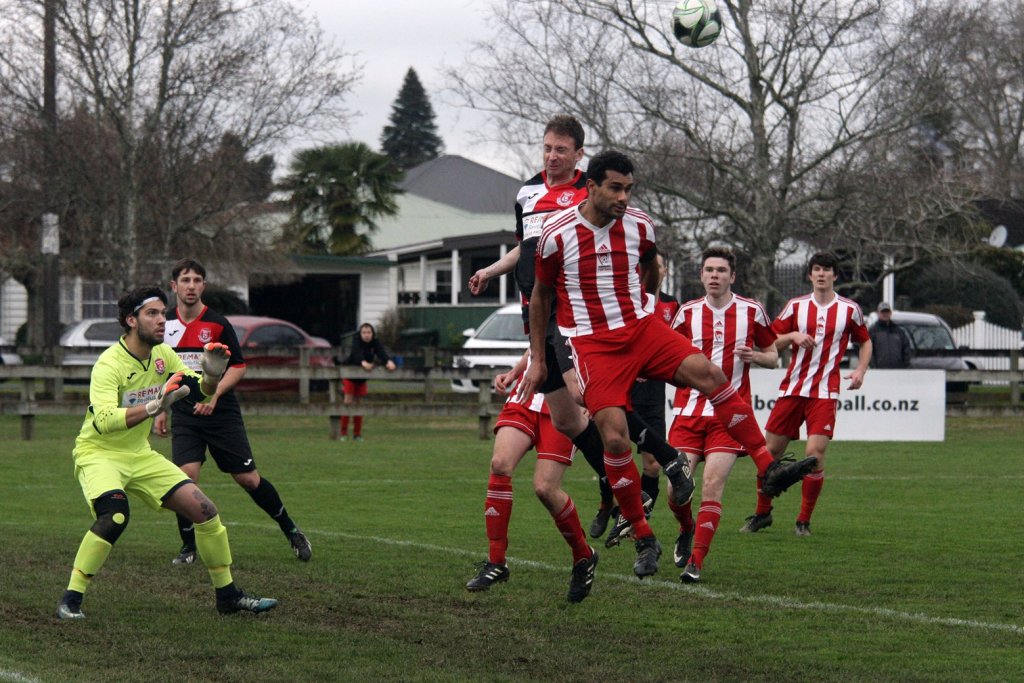 Cambridge captain Patrick Woodlock has hinted he may be playing his last season of competitive football, but he’s determined to leave the Reds in a position of strength. If he does retire at the end of the season, Cambridge supporters may well relish Woodlock’s last appearance at John Kerkhof Park in which his leadership helped his side come from behind to register an important win.

Cambridge badly needed a win against Franklin United last Saturday to pull clear of the Northern League’s relegation zone. But after 37 minutes, the Reds were trailing 1-0 to a Charlie Heather goal, and against a side that beat them 8-1 in their earlier match this season.

Woodlock took charge of the situation, coming forward for a corner and powering a header high into the Franklin net to level the scores and give Cambridge supporters hopes of a comeback. The 30-year-old captain’s goal inspired his team to one of its best performances of the year as they fought for a 3-1 victory and three points that lifted them four places up the Lotto NRFL second division table.

Woodlock’s brother Jamie, 20, scored both of Cambridge’s other goals. His first came only seconds after the half-time interval when he raced after a long ball and Franklin goalkeeper Brody Turkington failed to clear it, giving Woodlock an open goal.

In the 59th minute, Cambridge forward Josh Clarkin dribbled into the Franklin box but was ruled to have been taken down by a defender. Jamie Woodlock calmly slotted the ensuing penalty past Turkington to give the Reds a valuable 3-1 lead.

Instead of trying to defend their lead, Cambridge built in confidence and created the best of the chances in the remaining half hour. Coach Paul Richardson brought two strikers on as substitutes, a clear signal that the Reds were not going to sit back.

When the final whistle came, and the Reds had secured three points from their final home match of the campaign, the players celebrated, knowing Cambridge’s future in the Lotto NRFL second division lies in their hands.

The side’s remaining games are all away – a 600km round trip to Northland, followed by two Auckland trips for games against relegation-threatened Te Atatu and runaway leaders Takapuna.

Patrick Woodlock will go into those games anxious to ensure the Reds remain in the Northern League next year, having worked so hard to get the team back into the competition. He already holds a club record for having won its Player of the Year award six times 2008, 2013, 2014, 2015, 2016 and 2017, as well as being named the WaiBOP Premiership’s Player of the Year for 2015 and 2017.  Leading the Reds to league safety this year might rank high among his achievements.

Meanwhile, Cambridge reserves extended their unbeaten run to 11 matches with a 3-1 home win against Franklin United. The victory ensures the Reds maintain their lead at the top of the Lotto NRFL second division reserves competition. The side has three matches remaining and with nearest rivals Takapuna also winning (3-1 against Albany United) last weekend, the title might go down to the last game of the season.

Cambridge took the lead on the half-hour when leading goal scorer Andrew Taylor swept home an Adam Brady cross that finished an end-to-end move by the team. It was Taylor’s 19th goal in the competition. Goalkeeper Paddy Espin preserved Cambridge’s lead, making an excellent save at the feet of a Franklin forward in the final stages of the half.

After turning around at 1-0, Cambridge doubled their lead after 64 minutes when Johnny Sanchez scored the goal of the game, a screamer from the edge of the area that hit the underneath of the bar and into the goal.

Ten minutes later, Franklin’s Luke Chapman gave home supporters a few nerves when he struck a nice long range shot to reduce the deficit to 2-1. But Reds striker Aaron Huesser made sure of the points, securing his third goal of the season with six minutes to go.

In the Loaded WaiBOP Championship, Cambridge lost 2-1 at home to second-placed Taupo, after the sides were tied 1-1 at half-time.

Cambridge men’s A travelled to Te Aroha Cobras’ Boyd Park for a 1-1 draw. Cambridge’s scorer was Peter Buesnel who netted for the 19th time this season.

In the Waikato D competition, the D1 side stepped up their quest for the divisional title with a 4-0 home win against Te Aroha Cobras. The side took the lead through Fabian Burgos but the visitors then put up a solid defence to hold the score line for the rest of the half. Dave O’Donnell doubled the D1s’ lead after an hour, scrambling home from close in when a Steve Barrott long throw caused mayhem in the box. Paul Blackstock made it 3-0 with a long-range effort before Rick Vollebregt sealed the victory with his side’s fourth. The D2s lost 2-0 to Waikato Unicol.

This Sunday, the team plays Claudelands Rovers at Galloway Park in the semi-final of the Waikato Women’s Cup. Cambridge are trying to reach a women’s knockout final for the fourth time in six seasons.