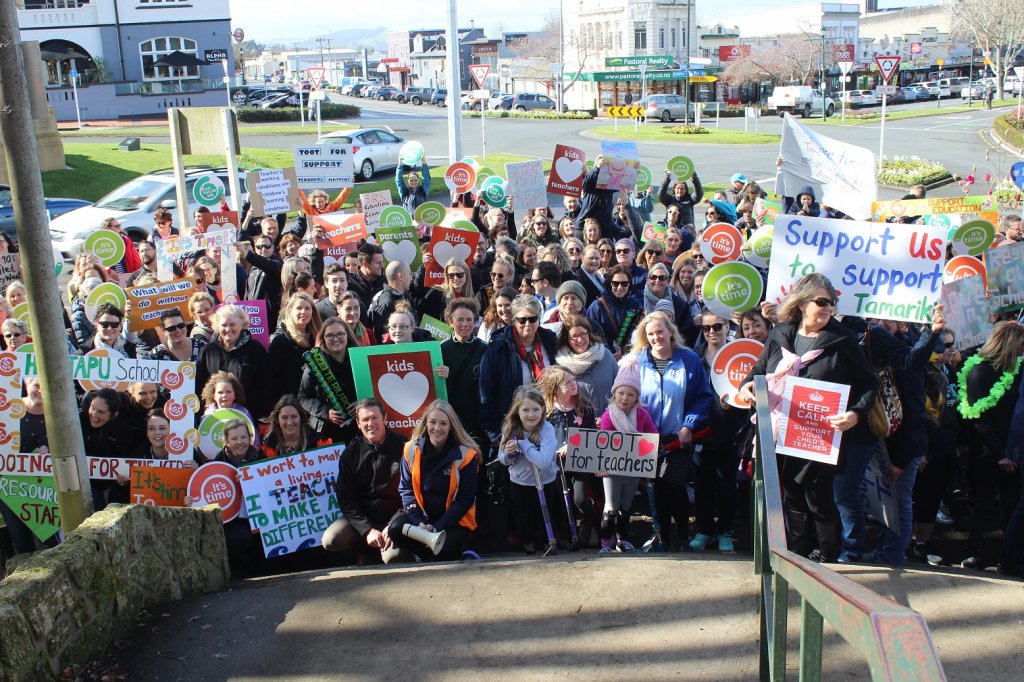 : Primary teachers and principals turned out in force on Wednesday last week, gathering at Victoria Square and then protesting at different points around town from 11am – 1pm.
Photo 2: Demonstration organiser Sarah Kirk asked the crowd to vote on the teachers’ next industrial action.

Cambridge primary and middle school teachers and principals took to the streets on Wednesday, part of a nationwide day of industrial action – the first time in 24 years, and just the third time in the primary union’s 135-year history.

After rallying at Victoria Park at 11am, more than 150 teachers mobilised to different points around town to minimise disruption to the community, keen to engage with the public and spread awareness of the issues behind the strike. The action comes as a response to what principal and teacher members of the New Zealand Education Institute: Te Riu Roa (NZEI) consider to be an inadequate pay offer from the Ministry of Education in the latest pay negotiations. Principals and teachers have asked for more time to teach and lead, more support for children with additional learning needs and a ‘pay jolt’ to stem the teacher shortage. Cambridge Primary School principal Mike Pettit told the assembled teachers that it was time to tell the Government that public opinion research has shown overwhelming support for the teachers’ cause.

Instead, the MoE has offered the majority of teachers (about 86 per cent) a pay rise from 2.2 – 2.6 per cent a year for three years, and just 12 minutes extra a week of time to work individually with children or plan and assess learning. President of the Cambridge NZEI and protest organiser, Leamington School teacher Sarah Kirk said there were around 150 local teachers at the demonstration, with more turning up from surrounding areas including Matamata and Newstead. The strike was about much more than just the pay rise teachers are seeking, “it’s also about the quality of education for the kids”, she said.  “A lot of the kids have special learning needs and not getting support for them takes away from their learning and takes away time from the other kids,” she explained.

Cambridge Primary School principal Mike Pettit told the crowd: “We know the new Government have been left a challenge. Ten years of neglect of education. We hear them when they say this cannot be fixed overnight. What we need them to know is that while we understand their predicament – teachers and children cannot wait,” he said.

Sarah then wrapped up the gathering with a ‘straw poll’. Those present were asked to indicate their support for either a geographically-based rolling one-day strike over the course of a week, or a two-day national strike. The outcome was resounding support for a two-day national strike, proof that teachers are serious about fixing what they say is a ‘crisis’ in education. And judging by the amount of public support on the street and tooting motorists, the community appears to be behind them.