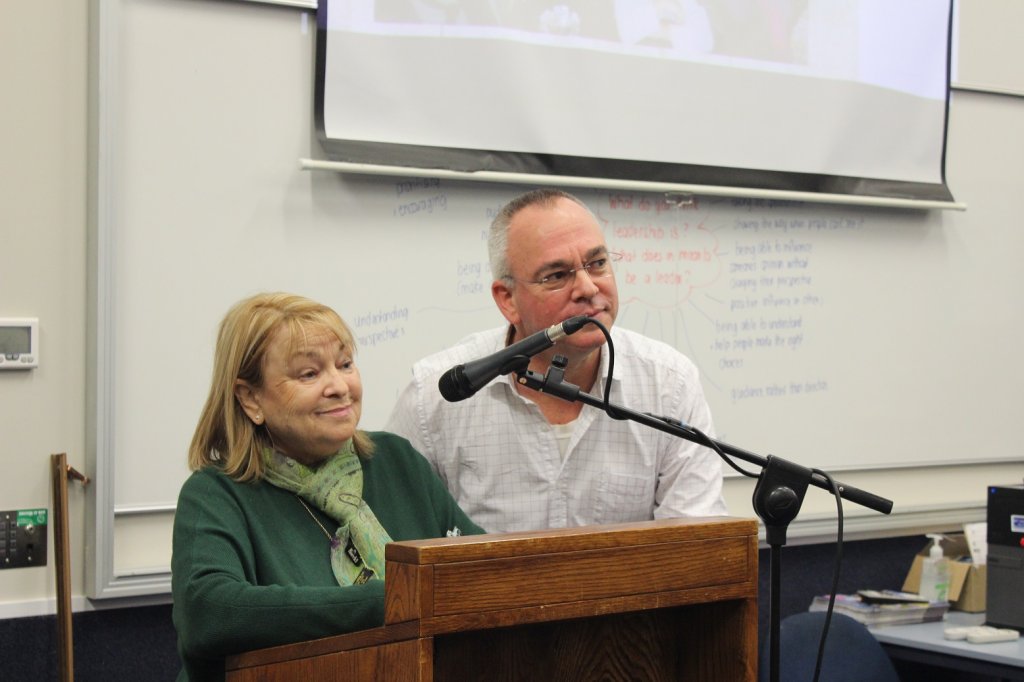 Students and staff at St Peter’s School were treated with an eye-opening visit from a holocaust survivor this week.

Paris-born Polish Jew Vivienne Spiegel, who immigrated to Melbourne in 1948, shared the heart-wrenching story of her childhood during World War II, where she and her two younger siblings narrowly escaped with their lives. Vivienne was joined by her son David, travelling on a tour of New Zealand schools organised by the Zionist Federation of New Zealand, visiting St Peter’s School on Monday this week.

The room stood still as she recalled the horrors that took place from age 6. Born to a shoemaker father and seamstress mother in 1934, she grew up in a working-class area of Paris. When her father Morsko Rigman received a letter in 1941, he asked then-six-year-old Vivienne to read it for him, and told her what wonderful reading she had done, despite receiving news that he would be send to a Nazi internment camp. “I never saw him again,” she recalled, only learning for certain in the 1980s that both of her parents had died in concentration camps.

“With the wearing of the star, all our human rights went away,” Vivienne recalled, explaining that Jews in Paris in 1942 could no longer use public facilities and could only buy food in the evenings, when most items had sold out. “The atmosphere at home changed overnight,” she explained.

With her father gone, her mother worked tirelessly to provide for her three children. They were taken from their home by French Police in July 1942 to a local velodrome, where thirteen thousand Jews had been kept inside for two hot summer days with no food, water or toilets, being processed before eventually being taken to concentration camps. “The smell was putrid, and the noise overwealming. Men were screaming, women were howling, babies were crying, it was simply horrible.”

Luckily, after a few hours her mother managed to get them out of there after learning that families with children under 2 weren’t supposed to be there that day.

“I remember distinctly that there were many babies and toddlers there,” Vivienne recalled. “French police were arresting more families than the Germans actually required for that particular round up. There was not a single Nazi soldier … Only a handful of people survived, but none of the four thousand children who were there ever came back.”

Vivienne and her younger brother and sister were soon smuggled to a family farm in the village of Chouffour, Notre Dame. They never saw their parents again.” It was only after I became a mother myself that I felt the pain and anguish that my mother must have gone through at the time,” said Vivienne, who stayed with a loving Catholic family until Americans liberated the village in 1944, at which point they had to go to a Jewish orphanage, where concentration camp survivors were returning to collect their children. “My brother and I constantly kept our fingers crossed, hoping desperately that at least one of our parents would also come back, but that never happened.”

As Jewish orphanages in France began to close in 1948, they were told a Jewish family in Australia wanted to adopt them, but after weeks of travelling by ship they arrived in Melbourne only to learn that they were simply joining another orphanage there. “It was absolutely shocking, and I think I was as close to a nervous breakdown as any child could be,” Vivienne said. In 1950 they were finally adopted.

“I must emphasise, that although I was so upset when I first arrive in Australia, that today I consider myself extremely lucky to have landed in the wonderful free country of Australia, where not once in the 70 years since my arrival have I been discriminated against for being Jewish,” Vivienne said. “My dream was always to have a family of my own, I have succeeded in that. … I am sure that I would have made my mother and father, who were so tragically taken and killed, very proud.”

When asked what message she had for younger generations, Vivienne said, “I think today, if children, or anybody, sees injustice or discrimination against any human being in the world, because of the colour of their skin or the shape of their eyes, somebody has to have the strength to speak up for them, just like the Catholic farmers stood up for me when I was a child.”