Veteran goalkeeper Jen Hull has lined up the dream end to her football career after leading Cambridge to the final of this year’s Waikato Cup. Hull, 34, plans to retire after the final, ending a seven-season spell at Cambridge where she has made more than 120 appearances for the first team.

On Sunday, she played a crucial role in helping her team reach the final in their 3-1 semi-final win against old rivals Claudelands Rovers. With the team needing a goal, the captain and goalkeeper took responsibility when referee John Mills awarded Cambridge a penalty. Hull struck the ball into the net from the spot to secure the win and go into the team’s fourth knockout final in six seasons.

Earlier, Cambridge had got off to a poor start, wasting a few chances and allowing Rovers to take an early lead. Gemma Martin brought Cambridge back into the game with an excellent long range goal, making it 1-1 at half-time. The Cambridge team regrouped at the break and came out firing.

Striker Astrid Howarth latched onto a through ball from Maria Cameron to fire home her 21st goal of the season. Hull’s penalty put the result beyond doubt and she and her team mates can now end their season in cup glory when they play the final on Sunday, August 26.

After the match, coach Andrew Taylor named Cameron as the Hill Homes Player of the Day and said Hull, Abby Cook and Maddy Burnett deserved special mentions for their contributions. Cambridge women have an excellent cup record, being beaten finalists in 2013 and 2015 and winning the trophy in 2014.  They also reached the Waikato Plate final in 2016. 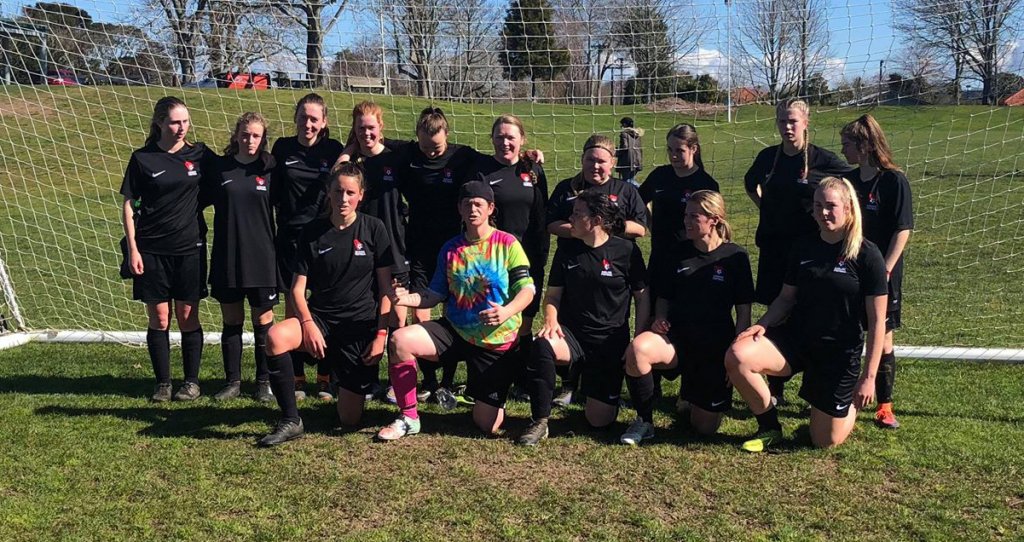 The Cambridge women’s team after their cup semi-final win.

Meanwhile, Cambridge’s top two men’s sides made a 600km round trip last weekend for crucial matches against Northland FC at Whangarei. Both teams returned with wins.

The Reds first team have almost secured their Northern League status for next year with a courageous 2-0 win at Northland FC. The win means the Reds can be sure of safety from the risk of relegation with a draw or win at Te Atatu on Saturday, regardless of what happens in the last match of the season when Cambridge visit champions Takapuna.

The match began in poor weather and the sides were deadlocked 0-0 at half-time. Leading scorer Josh Clarkin broke the stalemate late in the second spell with his 12th goal of the season.

Jamie Woodlock continued his good form – he scored twice in last weekend’s 3-1 win against Franklin United – to double Cambridge’s lead with five minutes remaining. From there, the Reds made sure they didn’t let Northland in for a chance, and they secured their second clean sheet of the season.

In the reserves game, Cambridge beat Northland 5-2 to remain top of their competition. Striker Adam Brady put the Reds 1-0 up, volleying home an Andrew Taylor corner. Aaron Huesser doubled Cambridge’s lead when he converted a chance created by a Taylor through-ball, then extended the visitors’ lead to three goals when he completed a counter-attacking move. Taylor scored his 20th goal of the season to make it 4-0 after he flicked home a cross from Brady.

With half-time almost upon the teams, Cambridge relaxed and conceded a goal meaning the sides turned around at 4-1.Five minutes into the second half, Northland reduced the deficit further. However, Taylor put the result beyond doubt in the 75th minute when he again combined with Brady. Player of the Day was Alex Mukaka.

Cambridge currently lead the reserves league by three points and a goal difference that is one better than nearest rivals, Takapuna. If both sides win their games next weekend, the title will go down to the final match of the season on September 1 when Cambridge visits Takapuna – and goal difference could be the clincher if Takapuna take the points.

In the Waikato A competition, Te Awamutu defaulted their local derby against Cambridge which means the Reds are ensured of fourth place in the division.

The D1 side continue to lead their division after a thrilling 3-2 win against mid-table Waikato Unicol. Down 2-0 with 20 minutes to go, the D1s found the energy for a late onslaught and a Dave O’Donnell hat-trick secured a famous victory. The result sets up a crucial match between Cambridge and second-placed Te Aroha Cobras next Saturday with the winner taking pole position in the race to the divisional title.

The D2s hosted bottom-placed Melville United and shared the points in a 1-1 draw.  Rob Dickson missed a penalty but made amends by scoring his side’s goal.

Cambridge’s Northern League teams and its women’s team all wore red armbands during their games as a show of support for club supporter Abby Hartley who was seriously ill in a Bali hospital. Her son Toby (16) plays for Cambridge’s reserves.