The Cambridge Bowers Cup team were all smiles after finishing fifth in the competition.

The final round-robin week of the Bowers Cup under-45kg rugby tournament over the weekend saw Cambridge face off against Hamilton Blue, who were sitting two points ahead. A win would see Cambridge in a playoff for 5th and 6th against Morrinsville.

Baxter Smith had a strong game and pushed through a ruck to score, but soon the Hamilton team pushed back and scored close to the posts, converted 12-7. Not to be outdone, Jonte Redman extended Cambridge’s lead and finished off the first half scoring an impressive long-range try, 17-7.

The second half was all Cambridge, with a second try each for Jonte and Baxter and a try to Andrew Bassam. Final score 32-7.

Looking to redress their previous loss against the team, Cambridge were fired up for their playoff against Morrinsville. An early try by James Maguire from broken play woke Morrinsville up and the defence became much harder to breach. 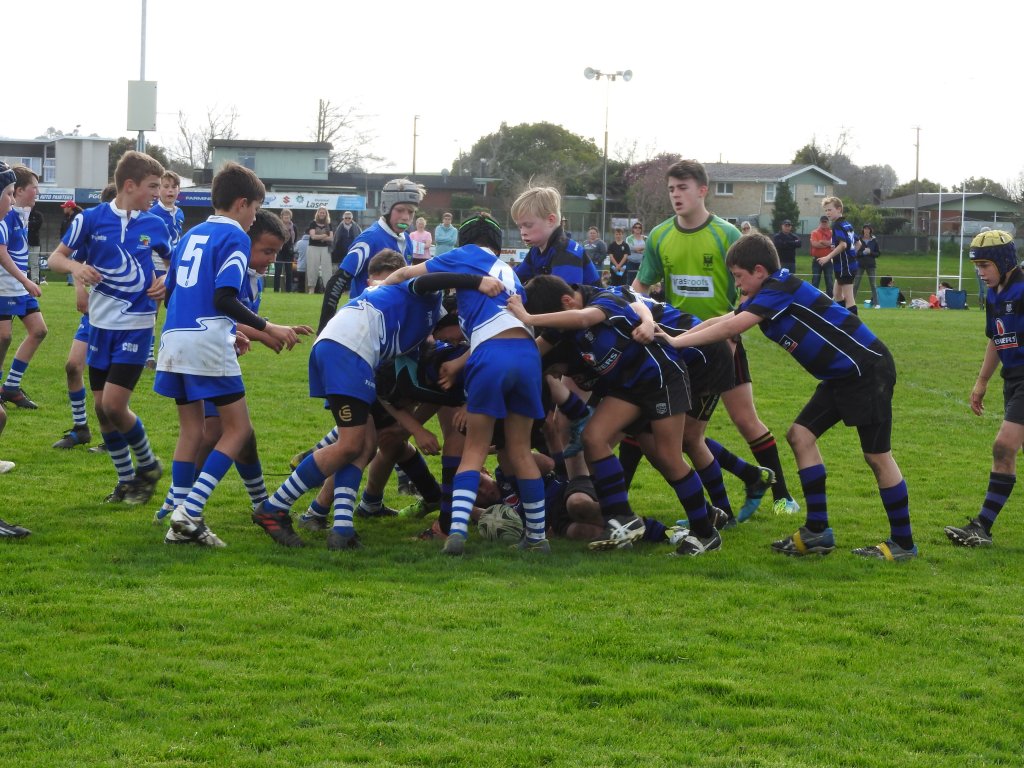 The Cambridge’s Bowers Cup team faces off against Hamilton Blue.

Cambridge were penalised heavily for offside and infringements at the ruck, but soon Justice Lummis scored Cambridge’s second try, converted by Ryan to make the halftime score 12-5.

In the second half Morrinsville pinned Cambridge in their own half for long periods. Solid defence and a strong character kept them scoreless, but then Tipene Keenan scored a try under the posts and Ryan converted for a fantastic end to the tournament with a 19-5 win. It meant the Cambridge team finished up fifth overall out of the nine Bowers Cup teams.

“Fifth place overall was a fair reflection of how we had performed,” said team coach Dave Peters. “The squad contained a lot of year seven players and a year six player so there should be a good core to carry into next year’s tournament.”

The team’s coaches and managers wished to thank the generous sponsors who provided funds, uniforms and equipment for the team. They include Redman Hire, Brinkworth Associates, Mitre 10 Mega Cambridge, Subway Cambridge, Mr Walter Barbershop, and GD Pringle Builders. “Also, thanks to Cambridge News for their fantastic support,” said Dave.