World cup racing at its finest Robbie Manson remained unbeaten as the fastest qualifier in all his races and the winner of the men’s single sculls final. Photo – Rowing NZ.

New Zealand’s elite rowers wrapped up competition at the Rowing World Cup II in Linz-Ottensheim, Austria over last weekend with three gold-medal finishes and one silver.

Facing up against the best of the best from 20 other countries throughout the three-day event, it was an impressive show of skill for the largely Cambridge-based elite rowers.

Mahe Drysdale had to pull out of the premier men’s single scull semi-final for medical reasons, leaving his Kiwi counterpart Robbie Manson to dominate the field. After winning the earlier rounds, he went on to secure gold in the final race, rowing neck-and-neck with Germany’s Tim Ole Naske for the last 200 metres to win by just a fraction. “That was really hard work and I feel pretty tired right now,” Manson said on Sunday. “It’s been a lot of hard work and a lot of nerves leading up to this, so it feels pretty special.” Grace Prendergast and Kerri Gowler secured gold in the women’s pair final, capitalizing on a bad stroke by Great Britain at 750m to pass the boat and lead the field to the finish. “We hope to see more of this and potentially step it up with our training camps on the way to the World Rowing Championships,” Gowler said.

In the women’s double sculls final, the slow-starting NZ team of Brooke Donoghue and Olivia Loe picked up the pace with a big push at the half way mark, catapulting into the lead and getting faster as they neared the finish. They took the gold with the Netherlands in second and Germany third. “We had a steady first 1000 meters and then pushed,” said Loe. “Everyone is going to keep stepping it up, so we will need to do the same.”

“We felt like we executed our plan which we have been practicing so it’s a good starting point leading to Lucerne,” Kelsey Bevan said. “We’ll take a couple of weeks of good training.”

New Zealand will take part in the third and final round of the World Rowing Cup in Lucerne, Switzerland July 13-15. 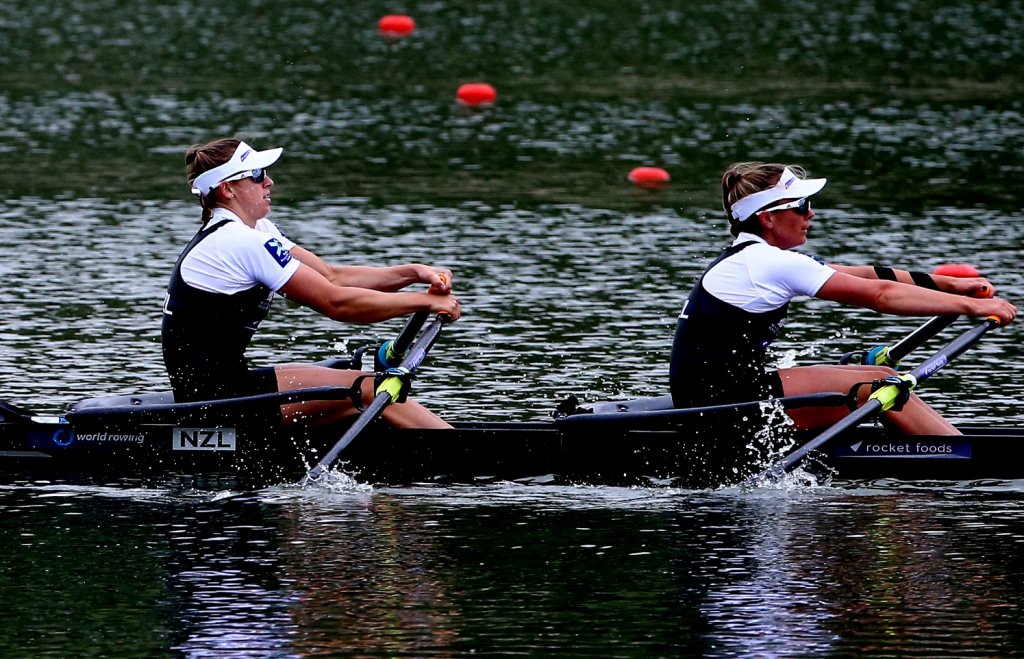 Brooke Donoghue and Olivia Loe dug deep at the half way mark of the women’s double sculls final to beat the Netherlands for first place. Photo – Rowing NZ.