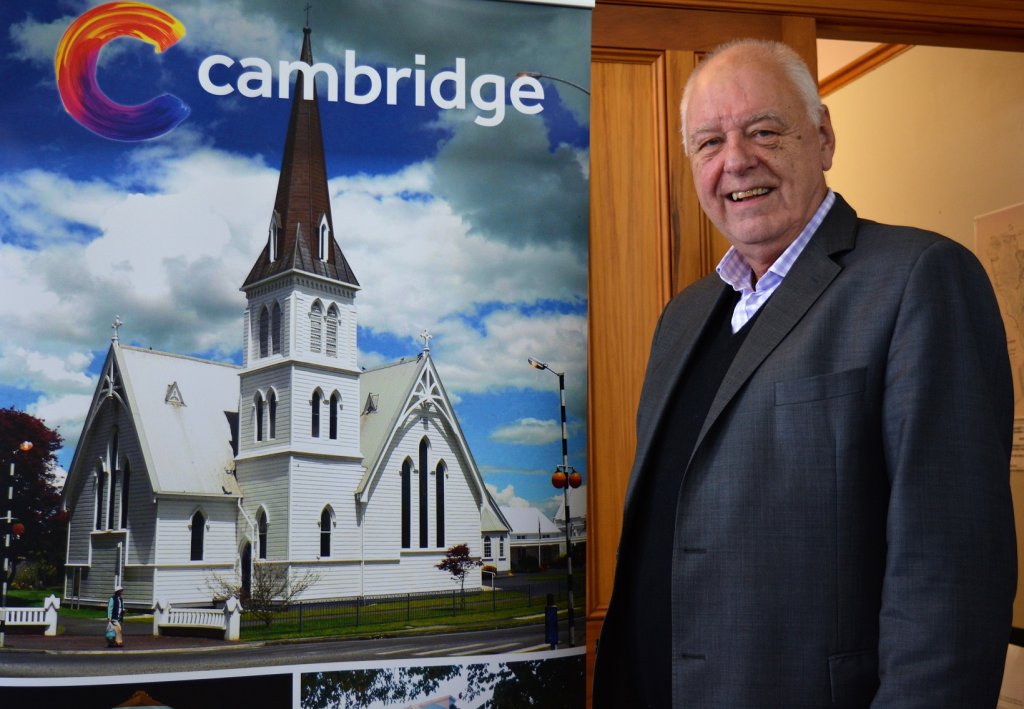 Departing Cambridge I-SITE chief executive Roger Gordon with some of the “C” signage done during the re-branding of the town.

Cambridge i-SITE chief executive Roger Gordon sees his departure this week as a timely turning point for the organisation.

Reflecting on his time at the helm, he said: “Those were a challenging four years. When I started in 2014, it was at a time when there was much concern around how Cambridge would fare once the expressway opened.

“But I’m satisfied now that our objectives in terms of re-positioning Cambridge have been achieved. However, we need to look at how we take it to the next stage – that is becoming a better-known destination for international tourists.  Our visitor base is mostly domestic, and our three main venues – Mystery Creek, the Avantidrome and Karapiro’s Don Rowlands Centre – are well established. Now, we must focus on bringing even more internationals here.”

His successor is Michelle Macdiarmid, a Cambridge marketing specialist who entered the role of chief executive on July 2.  Roger is confident that she is the right person for the job – digitally and social-media savvy, with all the credentials someone of her generation brings.

“That’s where the target market is now. That’s the platform. Michelle will be far more skilled that I am in those areas – she will be able to deliver what is now needed for Cambridge.”

Several key developments defined Roger’s term in office. Probably the most obvious one was finding a way to allay fears around how the Cambridge section of the Waikato Expressway might sound the death knell for local businesses. “But the anecdotal evidence we have suggests that traffic in the town is now back to what it used to be before the expressway went in. It hasn’t affected us negatively at all – if anything, the opposite is true.”

He brought in a comprehensive Visitor Guide in mid-2016, promoting around 23 varying visitor options, and more recently introduced a fleet of 14 bicycles for hire – both of which have proved immensely popular. He built up volunteer numbers and helped bed in the successful Christmas Parade.

Roger was also behind branding Cambridge with it’s big “C” in marketing campaigns.  “That was something that generated something of a community backlash at the time. We were looking for distinctive brand that suggested activity and choice to those outside the area.”

The “C” brand was intended to encourage people to “explore, connect, discover and indulge” the area. It was eventually adopted across several marketing platforms and has since drawn positive comment from outside Cambridge.

Now on the cusp of turning 71, Roger said it was time to take his foot off the pedal.  He hopes to find more time to visit those of his adult children living overseas, and spend more time with grandchildren. More immediately, there is a house move in the offing for Roger and his wife.

He intends to remain on the Cambridge Community Board, will keep up his involvement with Rotary, and is chairman of the local branch of the National Party. He’s also pondering an invitation to join the Board of Destination Cambridge, thinking some of his experience as a member of the New Zealand Institute of Directors might be useful, and has been asked if would consider doing some guiding work locally.

As for his time at the i-SITE?

“I have really enjoyed my time here. And don’t forget one of my biggest successes,” he grinned.  “That was getting the SuperLoo re-opened! It now has three times as many users as before it closed – it’s obvious there was more than a wee need for it in the first place!”