Cambridge face a rollercoaster ride to the end of football’s Northern League season. With only five rounds of competition to go, the Reds are fighting to ensure they don’t get dragged into a battle to avoid relegation. The club is currently eighth in the 12-team Lotto NRFL second division but the bottom pair at season’s end are likely to be relegated.

While Cambridge are two competition points clear of the relegation zone now, they face a challenging run-in to the end of the season because:

Despite the tough schedule, Cambridge can take comfort from strong recent form that has made the Reds difficult to beat. A spate of draws has kept the team lower on the table than it might have expected.

The latest of these was a cruel 1-1 stalemate on Saturday when Cambridge led Albany United after 92 minutes of play, only to concede an equaliser in the dying moments of the match.

The Reds had taken the lead on the hour through Dylan Blair, with his seventh goal of the season, and it looked as though Cambridge were going to claim all three points.

Goalkeeper Patrick Steele was in terrific form, making several important saves, while young centre back Jack Portegys was outstanding in keeping the Aucklanders at bay. But a late lapse by the Cambridge defence allowed United’s John Curwen to score from a corner. 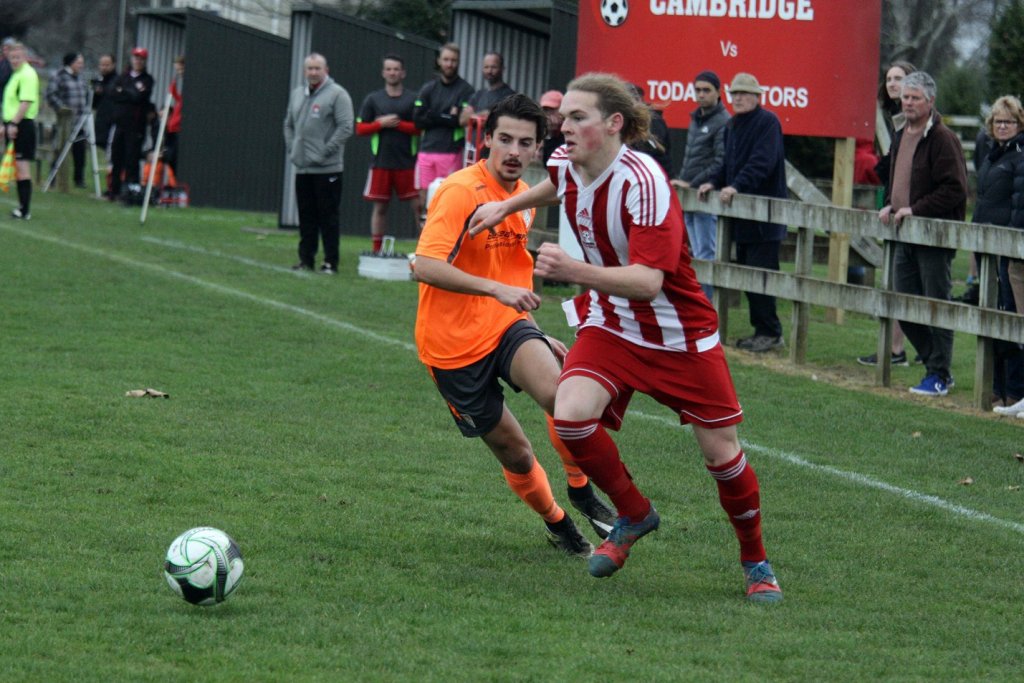 Meanwhile, Cambridge continues to lead the Lotto NRFL second division reserves competition after the side were awarded a 3-0 win by default when Albany were unable to field a team on Saturday, despite having more than 1300 players at the club.

Cambridge reserves are keen to clinch their competition and would prefer to do it on the pitch and not through defaults. Hopefully, they’ll get their chance this Saturday when both Cambridge Northern League teams head for Bucklands Beach for a double header at Lloyd Elsmore Park.

In the Loaded WaiBOP Championship, Cambridge climbed off the foot of the table with a 2-1 win against local rivals Matamata Swifts. After a scoreless first half, Cambridge went ahead through Peter Buesnel, notching his 18th goal of the season.

However, Swifts levelled through Lawrence Clothier. The winner, in the 73rd minute, came from Cambridge’s Yuuki Hiruti with his first goal for the club.

Cambridge’s women’s team recorded one of their biggest wins of the season, beating Hamilton Wanderers 7-0 in the Waikato Women’s A League. The victory keeps Cambridge in the race for the title. Goals were scored by Astrid Howarth (2), Chrissy Goodin (2), Gemma Martin, Maddy Burnett and Rachel Hill. Martin’s effort was the pick of the day, perfectly timing a header on the end of a pinpoint cross.

The Hill Homes Player of the Day was Howarth who now has 19 goals for the season and is tied with Hill in the race for the women’s Golden Boot.

In the men’s Waikato Division D, Cambridge’s D1 side maintained their quest for the divisional title with a 1-1 draw against Northern United Gaffers at John Kerkhof Park. The visitors looked like causing an upset until D1 defender Steve Barrott struck a 35-metre shot over the ‘keeper in the second half to tie up the match.

It was 49-year-old Barrott’s first goal for “a number of years” but keeps Cambridge in the hunt for the title.

The D2s beat West Hamilton United 2-0 at John Kerkhof Park to run up their third successive win. The team is improving as the season wears on and their latest win came with goals from Andy Kemp and Liam Storey.

After a break for the school holidays, junior football resumes this weekend.