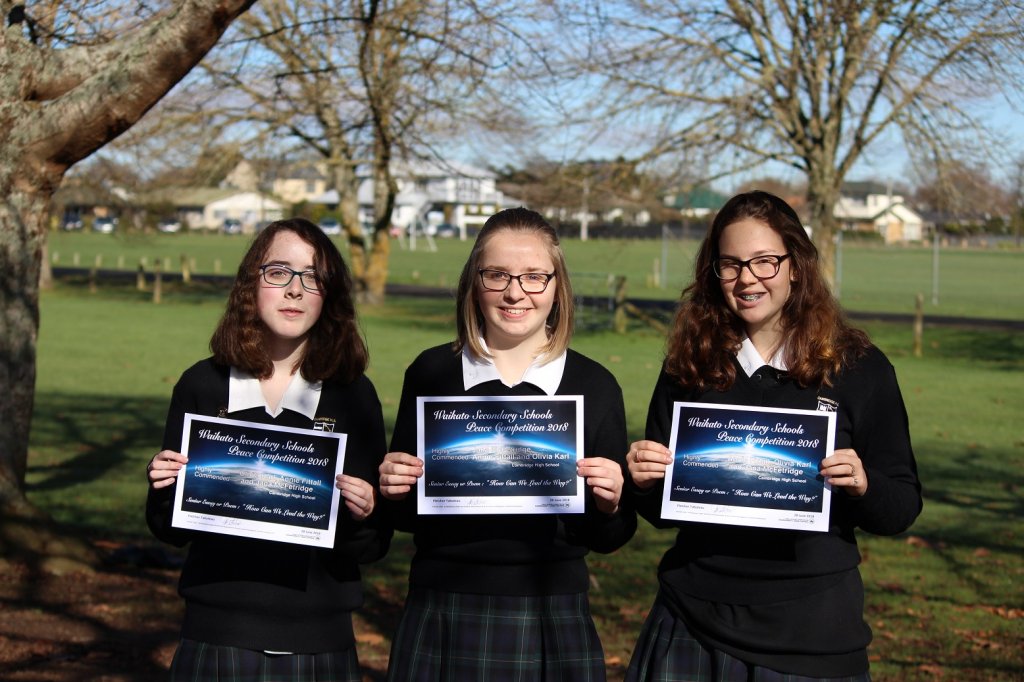 Olivia Karl, Jana McFetridge and Amie Fittall with their certificates.

A group of girls at Cambridge High School have done their bit to better humanity and won a prize in the process.

Amie Fittall, Olivia Karl and Jana McFetridge received a Highly Commended award at the Waikato Secondary Schools Peace Competition awards ceremony on June 28, for their video project completed in May.

The Year 11 students were challenged with answering the question: How can we help New Zealand to lead the way in creating a world where people learn to listen to, and respect the views of others and work out differences in a non-violent way?

Their response, conveyed in a short film, was simple: working together as one. They referenced the Maori principles of manaakitanga – hospitality, kindness, caring, respect, generosity and support – and whanaungatanga – kinship, connectedness and relationships through shared experiences.

“Having academic success is one thing, but having community success is the most important thing, actually working together as one,” explained their teacher supporting the project, Vanessa Tupp. “It was awesome for the girls just to create the project, but to actually get a highly commended and be invited to the awards was a really wonderful opportunity for them.” The girls receive their award from Fletcher Tabuteau and competition manager Judith Cartwright.

The girls won $500 to split with the school, taking home $85 each as well as a certificate presented by Fletcher Tabuteau, deputy leader of NZ First, and competition manager Judith Cartwright from the Peace and Disarmament Education Trust (PADET) – which was originally set up and funded by some of the French reparations for the Rainbow Warrior.

The girls, all 15 years old, spent a week and a half on the project, braving the freezing cold to film some of their shots at Lake Te Koo Utu. “The cinematography was very well done,” Vanessa said.

“For us it wasn’t really the money that we were in it for, it was just putting our views and our say and meaning into one video,” said Amie, explaining that the competition had given them a platform to share their message. “You can say something, but who’s going to hear it. But with this, now people are going to hear it.”

“I love filming, so that’s why I really wanted to do it,” said Olivia. “I think like a little bit of my voice came through in the shots that I got.”

The girls said after completing the project, one thing they learned is: “Small acts can make big differences,” said Amie.

“Thanks to Miss Tupp for inspiring us,” Jana added.