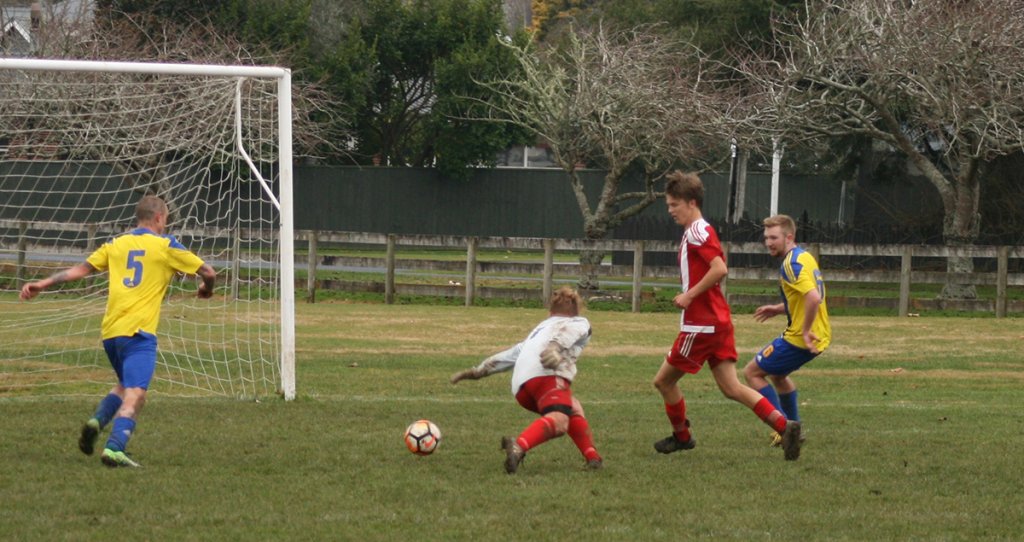 Three Cambridge teenagers played a football marathon on the weekend, featuring in three matches that lasted more than five hours in total.

Their testing Saturday began with a school match in the morning and was then followed by a league match for Cambridge Football Club and finally a knockout tie that went to extra time.

Goalkeeper Oscar Thomas (17), Willem Dikmans (17) and Kieran Vollebregt who turned 16 at the weekend love their football but hardly expected their day would be so demanding.

After playing for Cambridge High School’s first XI against St John’s in the morning (an 8-2 loss), the trio turned out for Cambridge in their Loaded WaiBOP Championship match against Otumoetai.

Despite two goals from Peter Buesnel, Cambridge lost that match 3-2 after leading 2-1 with only 20 minutes to go at John Kerkhof Park.

As soon as that game was over, the three players were available to play for Cambridge’s D1 team playing a Waikato Plate quarter final against Te Aroha Cobras.

That match finished 4-3 to Te Aroha after a gruelling two-hour tie that included half an hour extra time when the sides were level 2-2 at the end of normal time.

Te Aroha had started strongly, quickly taking a 2-0 lead, but the D1s fought back and with goals from Scott Jenkins (penalty) and Ben Ward, they forced extra time.

Te Aroha took a 3-2 lead in the first spell of extra time and then appeared to put the result beyond doubt when scoring again with eight minutes of the extended match to go.

Cambridge’s Vollebregt celebrated his birthday by finding the net in the dying minutes to set up a thrilling finish.

Both teams had late chances to score and Cambridge forced a series of corners, but to no avail.

The Hill Homes Player of the Day was 19-year-old Caitlyn Varcoe whose hat-trick spearheaded the Cambridge win. Cambridge has a strong record in cup competition, having won the women’s cup in 2014 and been beaten finalists in 2013 and 2015.Meanwhile, a 2-1 loss to Auckland rivals Metro FC has left Cambridge’s first team contemplating a tense finish to the Lotto NRFL second division season.

The points lift Metro clear into mid-table but leave the Reds within reach of a pack of sides fighting to get clear of the league’s relegation zone – and other results didn’t help.

Ngongotaha beat Claudelands Rovers 5-2 to get clear of the division’s two relegation spots while Onehunga Mangere United beat Te Atatu 2-0, meaning the lower half of the table is becoming tighter by the week.

Cambridge went a goal behind from a Metro corner late in the first half at Phyllis St when Josh Chemis scored.

The Aucklanders doubled their lead in the 81st minute through Josh Dayal before Cambridge defender Jack Portegys scored his second goal of the season to reduce the deficit with three minutes left.

That’s how the score remained, and Cambridge now have six games left – four of them to be played away – to make sure the club doesn’t drop into the two relegation places.

In the reserves league, two goals by leading scorer Andrew Taylor and another by substitute Alex Mukaka ensured Cambridge reserves kept their eight-match unbeaten run with a 3-3 draw at Metro FC in Auckland.

Cambridge were never behind in the match, but Metro kept fighting back to prevent the competition leaders from bringing home the points.

Taylor put the Reds ahead in the 19th minute with his 17th goal of the season.

He soon after added a second and Cambridge looked set to maintain or increase their five-point lead at the top of the Lotto NRFL second division reserves table.

However, Metro came storming back with two goals before half-time, sending the teams into the interval at 2-2.

In the second spell, substitute Mukaka found a third goal for Cambridge but again Metro found the net to share the points.

The club’s Waikato A and Waikato D2 teams had byes.