Thomas Orr on his way to the try line supported by Daniel James and Alex Kennedy.

Hosting Morrinsville sports in the last home game of the regular season, the team was looking to put together a good performance for their supporters and cement their place in the top four. Hautapu were expecting a tough encounter from Morrinsville after they got the win over Hamilton Marist the previous week and no doubt were looking to bag another win over a top-four team.

This was not to be the case as Hautapu dominated the match in every aspect of the game, scoring at every opportunity to hold a 33-0 lead at the break. This pattern continued in the second spell with Hautapu scoring a further 48 points to easily take the match 81-0, running in 13 tries and slotting 8 conversions.

Next week we play Hamilton Old Boys in Hamilton and the winner will take the top seeding, going into the playoffs. The team would also like to congratulate Alex Graham for receiving his 50 premier games blazer on Saturday. 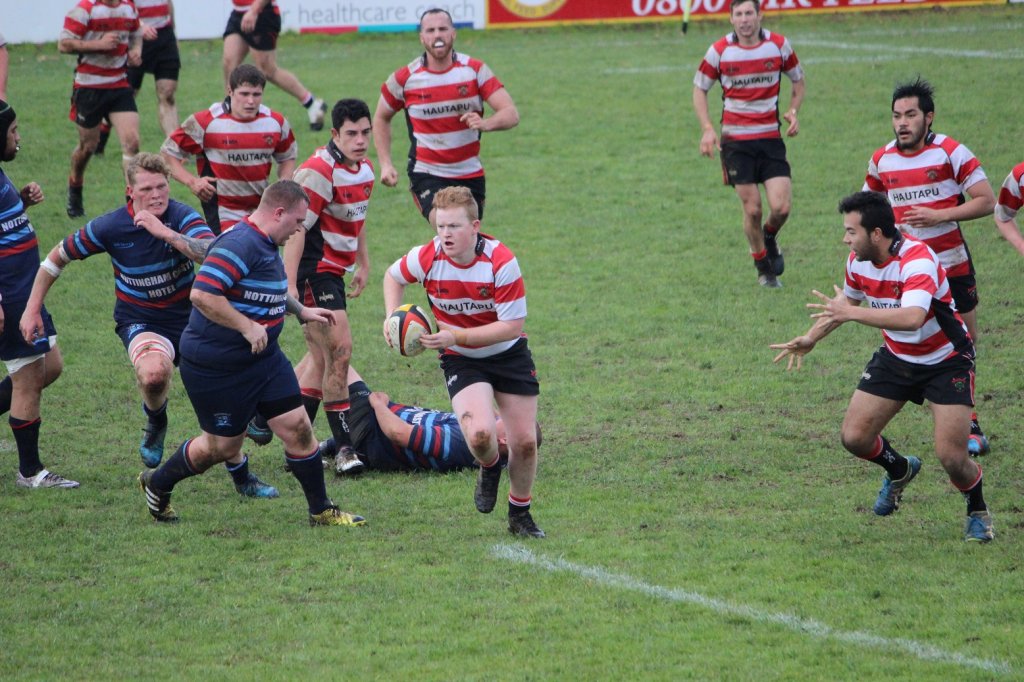 James Nelson on the break.

It was our last second round game at home with the opposition being Morrinsville. A number of players were away, injured or sick, making the coaches job a lot harder putting a team together. Some of the bench players turned up getting over colds, flus etc which showed great respect for the team.

The game started on time but unknowingly to us Morrinsville were struggling to put a team together. The Development lads got into their stride immediately attacking at every opportunity and the tries started to come. The forwards drove it up, committing the opposition giving our backs plenty of space to score. With the changes made at half time a different team came out to play with a number playing out of their position. Hautapu relaxed a little which allowed Morrinsville to get their game under way. Hautapu’s Pat Tomsett playing half back then first five was awarded player of the day for his performance. Thomas Orr, back from a long layoff had a great game at full back. The damage was done in the first spell with a win to Hautapu 67-15.

At Hamilton Old Boys on Saturday, see you all there. Thanks to our sponsors and supporters.