Hautapu’s development and premier teams were rewarded for their efforts over the last round robin play with both teams hosting a semi-final on Saturday. The development hosting Hamilton Marist Bs and our Premiers taking on Otorohanga. Having each won a game in the regular season this was going to be a tough and physical encounter for Hautapu. Hautapu’s Premier A team opened the scoring with a penalty which was quickly followed by one from Otorohanga. Around the 20th minute Hautapu opened up the Oto’ defence from just outside its own 22, the backs linked well with Sam Tupou crashing in for the first try of the match. Hautapu forwards pushed over for a try in the 32nd minute from a line out drive and just before the break Sam Tupou bagged a double out wide from a grubber kick. Hautapu going into the half time break with a 20-3 lead.

Knowing Oto’ would be looking for points early in the second half to get themselves back into the match, the first 10 minutes was going to be key to winning this match. From a charged kick early on Hautapu were onto the attack and after a couple of quick phases Dion Berryman was over in the corner. This try reinforced Hautapu’s resolve as Oto’ continued to fight and the contact got more bruising as this game went on. It was to be Hautapu’s day in the end running out comfortable winners 46-8 to book a spot in the final with Hamilton Old Boys after they beat Hamilton Marist in the other semi-final.

Next week’s final will be played at Waikato Stadium with a late 5.30pm kick off. Supporters’ buses will be running from the Hautapu Club rooms for those wanting to come along and support the team. 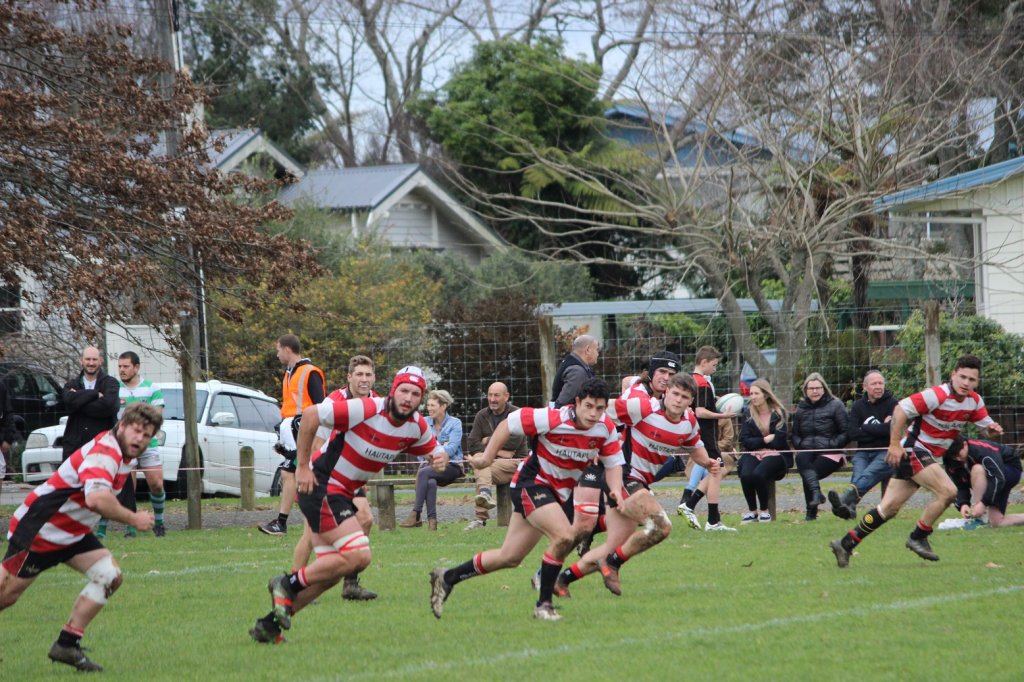 Hautapu’s defensive line heading up field from a kick off.

It was semi-final time at Memorial Park and the development team took on a determined looking Marist team. Marist opened the scoring with a dominant period of play to go 5 nil up. Hautapu went on the attack immediately gaining a penalty goal. This was followed shortly after with another penalty to Iwan Dawes. For the rest of the first half Hautapu continued to dominate in the forward exchanges resulting in Mike Tomsett bursting over for a converted try, Hautapu going to the break with a 13-5 lead.

The second half started with Marist utilising their size and strength to put us under pressure.   Hautapu lads held their own and missed two opportunities to score but the opposition were too strong, especially in the last 10 minutes, scoring three unanswered tries to win 26-13.

For a very young side the Hautapu Development team can hold their heads up high, to reach the semi-final was a great achievement, with only three loses this season. They also won the Championship Round Cup. Well done boys.

Again, thanks to the supporters and sponsors and a special mention to our coaches and management team. Come and support our Premier A team in the final this Saturday at the stadium. See you all there.