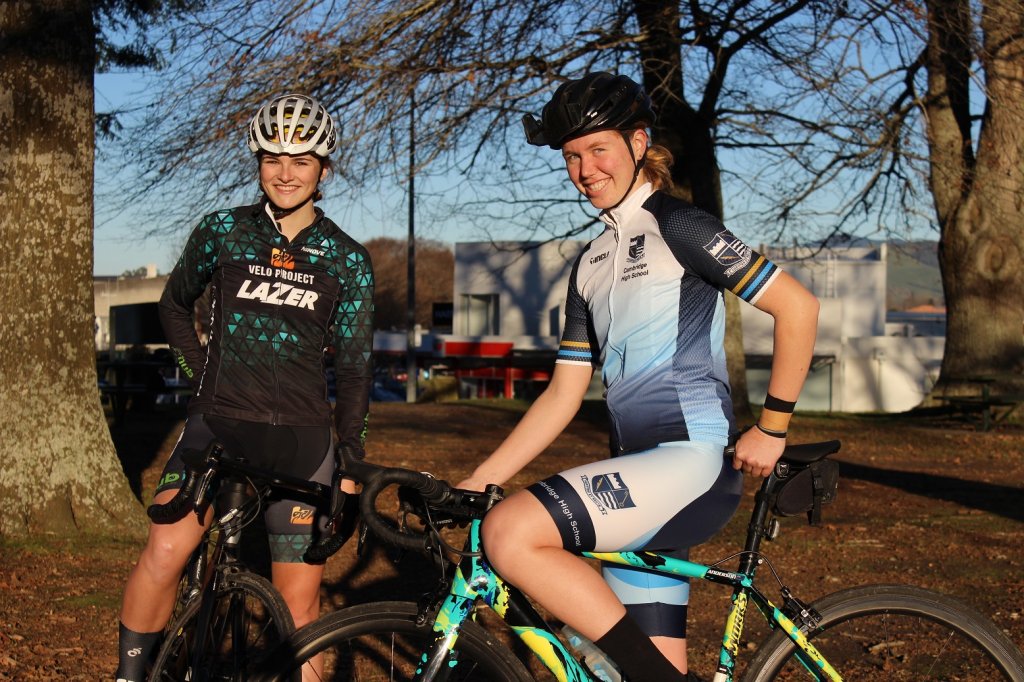 Cambridge’s student cyclists Ally Wollaston and Mya Anderson said the most important thing for those taking part in the NISS Cycling Champs was to have fun.

Students from Wellington to Whangarei will gather in town this weekend for the North Island Secondary School Road and Track Cycling Champs.

The roads of Roro-o-rangi will be teeming with cyclists throughout Saturday and Sunday, racing specialized courses along Maungatautari, Redoubt and Kairangi Rds. Track cycling will kick off on Sunday afternoon at the Avantidrome, carrying on through to Monday night. It’s free for spectators, so why not get out there and cheer on our local Cambridge High and St Peter’s School cyclists.

It will be the last year that Ally Wollaston competes in schools cycling. The Year 13 St Peter’s student topped the tables at last year’s event, finishing first in the criterium for the second year in a row as well as coming second in the road race. “I want to win the criterium,” she smiled, “I don’t want to break the streak now!”

After falling sick Ally wasn’t able to show off her impressive skills on the track last year, but looks forward to demonstrating her pedal power this weekend. “My (plan of attack) would be to stay healthy this year, because that didn’t happen last year,” she said. “Especially heading into the Junior Worlds training camp the day after the competition finishes.”

Meanwhile Cambridge High School’s Mya Anderson, who cleaned up at last year’s North Island champs with wins across all her track races, as well as first place in the road race, is looking forward to adding the criterium title to her belt, having finished second last year. “I would really like to win the criterium since I’ve got second for the last two years,” the Year 11 student said.

Just a month out from the competition, a rogue stick caused Mya to crash off her bike, spraining her wrist and thumb. It’s been a gentle balance between healing and training since then, transitioning back into somewhat-normal training over the past fortnight. “I’ve just gotten straight back into it, just for the North Islands,” she said.

Despite the setback Mya plans to grab the top titles once again. “Competition’s going to be a bit harder this year, some girls have gotten really good,” she said. “Having my sister there competing will be quite cool too.”

In addition to going out with a victorious bang, Ally looks forward to watching and encouraging the younger St Peter’s riders as the school’s team captain. “It will be pretty cool to see the younger riders getting in amongst it, seeing them do well racing, watching them learn, it’s pretty cool,” she said.

Both the girls advised that cyclists this year should make sure they stay warm, “because it makes a huge difference if you’re cold when you’re riding,” said Ally.

“I think the most important thing for the new riders is to not take it too seriously, it’s a school event, it’s not the Olympics, it’s important to have fun and not psych yourself up too much.”

“Just stay safe and have fun,” Mya added. “It’s all about learning.”