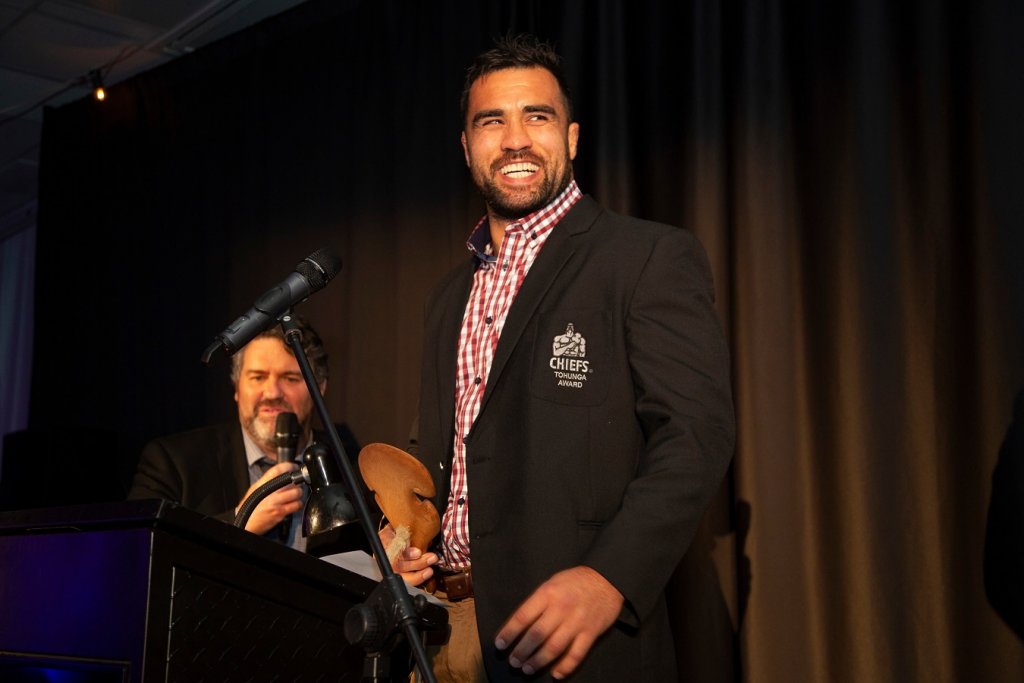 The annual awards for the Chiefs rugby team were held last week, celebrating the end of the 2018 season whilst recognising outstanding players – four of which came through the Hautapu rugby club.

Liam Messam was awarded the Chiefs Tohunga lifetime award, the supreme award of the night, recognising his 12 seasons with the Chiefs team. The former Hautapu player is just one of three people ever to receive the award. He will be continuing his rugby career in France with Rugby Club Toulonnais. “When you care this much about your people and your community, it’s really hard to leave,” Liam said, “and you’ll do anything it takes to make that place a better place.”

The Hautapu Sport Club’s director of rugby Mike Johnson said Liam’s award was “thoroughly deserved”. “You couldn’t meet a nicer person, or someone that’s more committed,” he said, “and not just in rugby, but in the community, helping kids and all sorts of different causes over the years. … He’s not just a good footballer, he’s a good human being.

“And even though he hasn’t been able to play while he’s been professional, he’s still been a great supporter of the club.” Luke Jacobson received the Rookie of the Year Award from Andrea Friar.

Having signed a two-year contract with the Chiefs last year, former Cambridge High School student Luke Jacobson was awarded Rookie of the Year at the awards evening last Monday. “Winning Rookie of the Year came as a surprise to me,” he said, “and I am really grateful to have got the number of minutes that I have this season.”

Former St Peter’s student Laghlan McWhannell, another Hautapu player, was awarded Under 20’s Player of the Year. “The award is a bonus,” he said. “For me, rugby is all about the friendships and camaraderie – at the Chiefs Rugby Club I have felt really welcome from the beginning.” Under 20’s Player of the Year went to Laghlan McWhannell.

Finally, the Development TAUA Player Award went to Ayden Johnstone. “As you can tell by my highlight reel, or lack thereof, I’m really just a grinder,” the humble Hautapu lad said. “It was a real highlight to train in the Gallagher Chiefs environment this year, training alongside people I’ve watched on the TV, growing up as a youngster,” he said. Johnson said the club was “tremendously proud” of the players, and rather humbled that four of the seven awards of the night went to Hautapu club players. “It’s certainly a credit to our coaching staff and the other team members,” he said. “It’s a team game and they’re part of a pretty awesome team.”