Faye Jeffries, one of the longest standing members of the Cambridge Library, cut the birthday cake. Photo – Michael Jeans.

The Cambridge Library’s fictional characters came to life last week as locals of all ages dressed as their favourite book characters for the 20th birthday celebration of the library at its current facility.

The longest standing member of the library, Faye Jeffries, did the honours of cutting the cake before Rachel Newnes, Cambridge Library supervisor, and Waipa Mayor Jim Mylchreest spoke to the gathering of several dozen current and former locals. “On July 9th, 1872, the Cambridge library first opened its doors. 146 years later, its services are still going strong,” said Newnes, detailing how the library had gone from using a card catalogue, a DOS matrix printer and dial up internet, to utilizing the benefits of modern technology with e-books, audiobooks and wifi.

“… and so much more has changed. But a lot has stayed the same as well,” she said. “We are still a part of a fantastic community which the team really enjoys being a part of.” 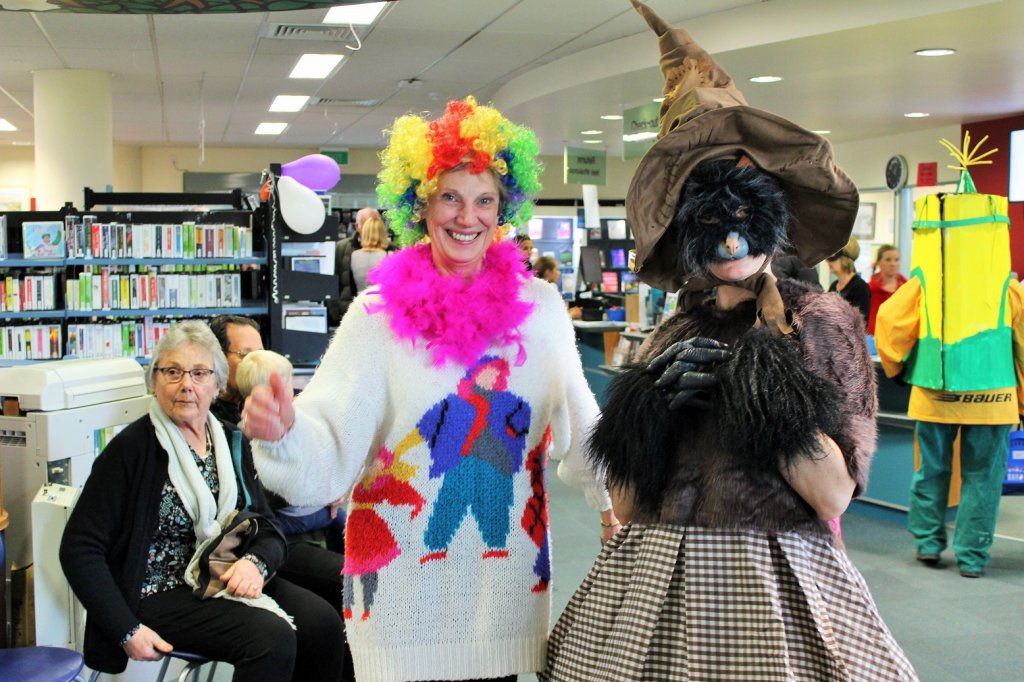 Margaret Langdon (left) fittingly wearing a Margaret Mahy tribute costume, and Hannah May dressed in her own cat-witch concoction.

“It’s one of those projects that I was involved in early in my career with the council,” said Jim Mylchreest, remembering the library’s move from the Robert Harris site on Victoria St to its current location 20 years ago.

“This has really become the hub of Cambridge … The fact that it’s the most used facility that we provide for the community, the proof is in the pudding really.

“I hope all of today’s generations and future generations enjoy the library the same that we all have.” 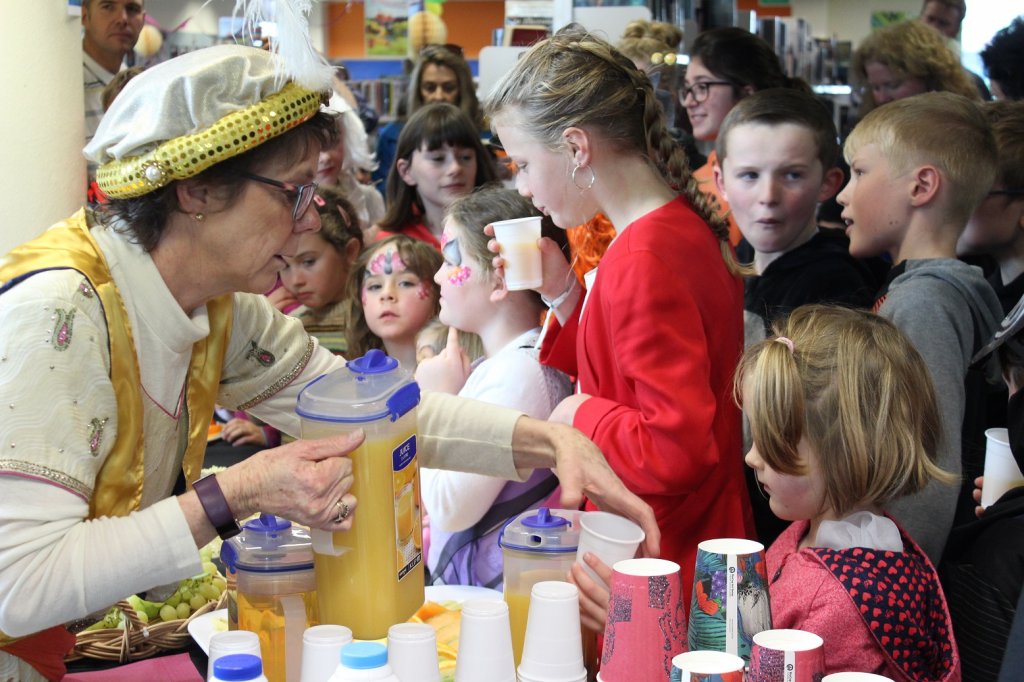 Christine Lewis was on hand to feed the crowd.

Faye Jeffries said she recalled going to the library as a young girl with her mother, back when it was in the side rooms of the town hall, now the i-SITE premises. That site was funded by Andrew Carnegie, a Scottish-American philanthropist who established free libraries across the English-speaking world, including 18 in New Zealand.

“I can remember the old library quite well,” said Faye. “I still read quite a bit … that’s my favourite past time.” 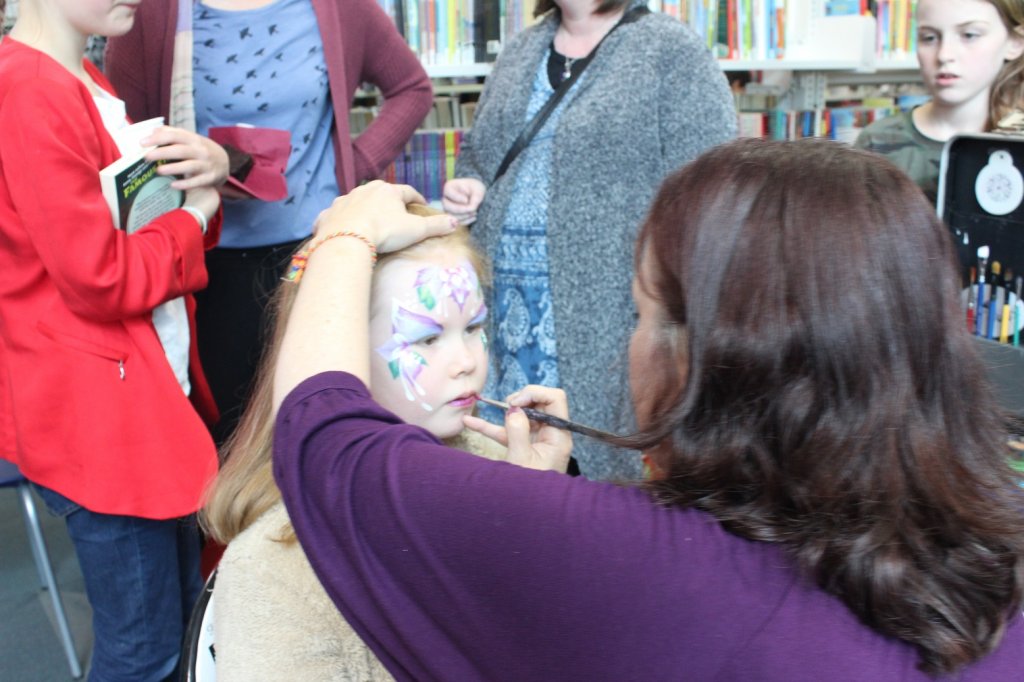 Anna Stoneham getting her face painted.

Newnes said the library had gone from having 300 books when it first opened on Victoria St, to now having over 150,000 items between the two Waipa libraries.

The first library in Cambridge was opened inside the Cambridge Primary School building on July 9th, 1872. It moved from there to the Carnegie library, then over to Victoria St before settling on Wilson St 20 years ago this month. 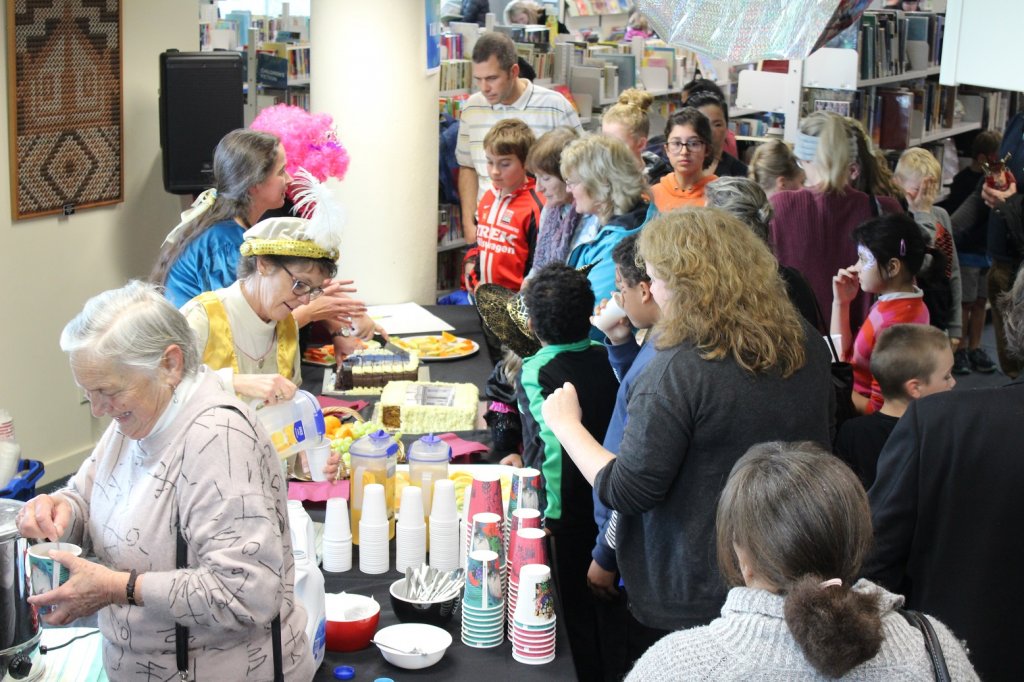