Stars turn out for The Waterboy It was absolutely teeming down last Friday, but a break in the weather allowed for visiting celebrity and former All Black Josh Kronfeld to get out onto the water at Lake Karapiro in a double scull with rowing royalty Eric Murray. With Josh in his underwear and having never rowed before there was a limit to what anyone could hope for, and the pair ended up taking an unscheduled dip in the chilly lake. The five-minute row and subsequent swim were in honour of the announcement of a star-studded November fundraising regatta for sports charity The Waterboy, which works to ensure all kiwi kids can have access to sport.

Rower Robbie Manson is also on board for the event later this year, keen to ensure other young people get the chance to reap the rewards he’s experienced from participating in sport. Plus, The Waterboy’s Everybody’s Game speaker series on homophobia in sport is close to his heart. As a gay athlete, Robbie said he used to see his sexuality as a barrier to engaging with sport. “I thought I couldn’t come our or be involved in sport if I did,” he explained Fortunately, he has overcome this perceived barrier to compete at the top echelons of rowing, named as the Oceania Male Athlete of the Year for 2017 by the Association of National Olympic Committees in Prague in November. Eric Murray and Josh Kronfeld took to the water in a double scull… but didn’t last long. Photo – Jason Haselden.

Fellow champion rower Olivia Loe, who competes in the women’s doubles, is also keen to be part of the regatta. “Sport was a massive part of my life growing up…it’s sad when kids don’t have that,” she said.

Whether it’s breaking down financial barriers of participation by sponsoring the sporting costs, or education in schools around the harmful effects of homophobia in sport, making sure every New Zealand child has the opportunity to play sport is at the heart of The Waterboy’s work. 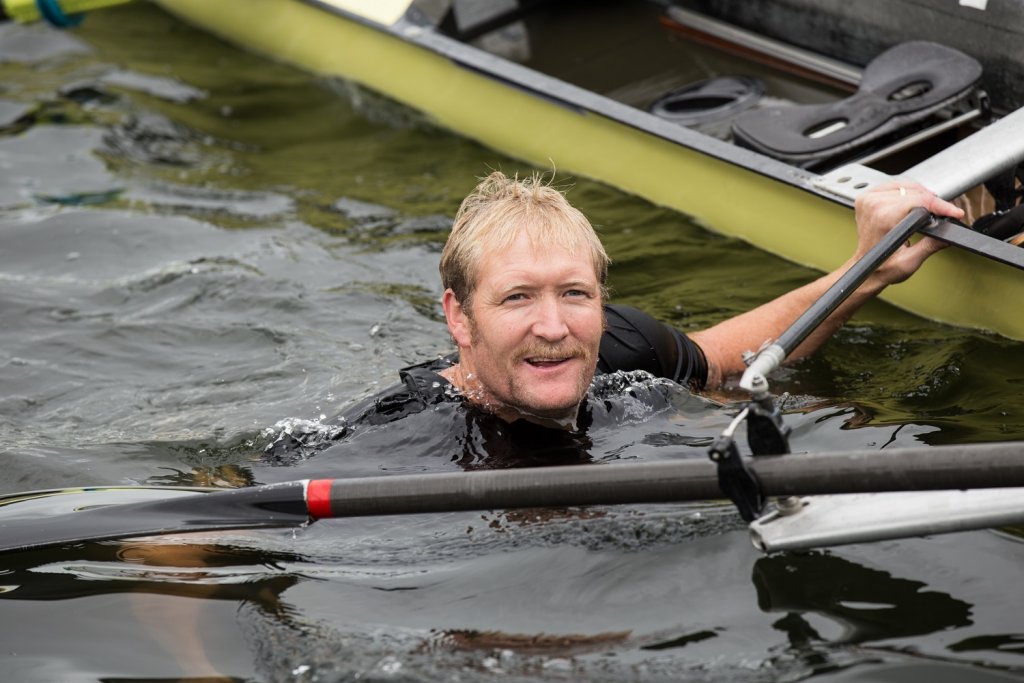 More prone to speeding across the lake surface, it’s not often Eric Murray end up in the water. Photo – Jason Haselden.

The fundraising regatta will start with a cocktail function on November 15, with racing happening on November 16 at Lake Karapiro. Hosted by Eric Murray, the eights event will see crews of six novice rowers team up with a celebrity and a rower to tackle a 500m course. Josh Kronfeld has put his hand up along with former Silver Ferns captain Casey Kopua, with more big names set to throw themselves behind the cause over the coming months.

Visit www.thewaterboy.org.nz to find out how to get involved.