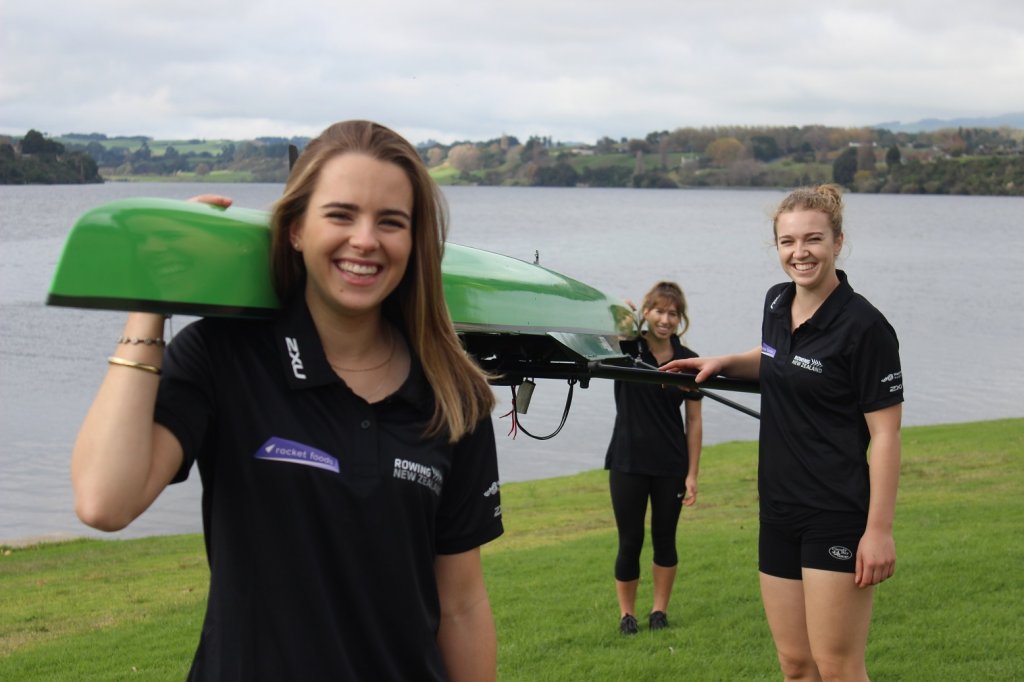 Justine Hobbs (front), Kaylin Wren (rear) and Lily Butler (middle) will train locally with the NZ team up until their departure for Sydney on June 25.

Three Cambridge rowers will take part in an Australasian showdown in the coming months, following selection in the Under 21 New Zealand rowing team. Lily Butler, rowing as a women’s heavyweight single sculler, Justine Hobbs, rowing in the lightweight women’s double scull, and Kaylin Wren, the women’s reserve, will be part of the Kiwi team contesting the Aussies in the Under 21 Trans-Tasman regattas.

All three were excited to be named on the team this month, having completed three gruelling days of trials at Lake Karapiro from May 4 – 6.

The young rowers were pitted against each other during trials, earning points for top placements in each race, to determine who got a spot in the team.

Lily, a 2017 St Peter’s School graduate, said making the New Zealand had always been a personal goal. “I’ve always wanted to do it, and now that I’ve done it, it feels really cool to be able to step up and train even harder,” she said.

The team will be competing against their Aussie counterparts in the Under 21 Trans-Tasman regattas, competing for the elusive Rusty Robinson Trophy which Australia has held for the last few years. The two-part competition includes a regatta in Sydney over June 28 and 29, followed by another regatta at Karapiro in late August – where a Canadian team will also compete for the first time.

“Each day it’s a different kind of boat. The first day we’ll be in our small boats, double and singles, and then we’ll go into quads and then move into the eight for the last day,” former Cambridge High School student Justine said.

The different racing format wasn’t the only highlight for the trio – they are also looking forward to the atmosphere at the international competition.

The team will commence their training camp at Podium Lodge on June 15.