After nearly eight years of not playing each other at top level, Cambridge and Hamilton neighbours Claudelands Rovers have revived a strong rivalry in football’s Northern League.

But despite both teams having chances to win their latest encounter, the two sides were forced to share a 1-1 draw at Galloway Park last weekend.

For Cambridge, it was the Reds’ fourth draw in five games but a useful point all the same as Rovers have been in top form, and in third spot on the Lotto NRFL second division ladder.

Callum MacLeod hit the bar from a distance, and Rovers’ ‘keeper Adam O’Rourke was at full stretch to turn another Cambridge effort to safety, shaving the post on the way.

The pressure paid off in the 25th minute when Cambridge’s leading goal scorer, Josh Clarkin, got into space and unleashed a shot from 12 metres into the roof of the net.

It was his 11th goal of the season and he remains the division’s second top goal scorer.

In the 37th minute, Claudelands Rovers levelled with a well-taken goal by Owen Comber whose shot looped over the head of Cambridge goalkeeper Fraser Nicholls.

Though that was the end of the goalscoring for the day, the rest of the match was absorbing as both sides played fast, passing football and were willing to throw players forward.

Elliot Cooper, in centre midfield, and Josh Clarkin, playing deeper than usual, combined well in the middle while Cambridge’s defence coped well with Rovers’ attacks, despite the absence of injured skipper Patrick Woodlock.

In the end, a draw was a fair result.

This Saturday, the Reds travel to Auckland for a Lotto NRFL fixture against Papakura City.

Firepower up front proved to be the difference as Cambridge Reserves continued on their winning way, beating Claudelands Rovers 4-2.

The win – Cambridge’s fifth in a row – sees the Reds maintain their healthy lead at the top of the reserves competition.

Cambridge took the lead after 17 minutes, when a free kick by Andrew Taylor was headed onto the Rovers’ crossbar by defender Sam Garmonsway. Quickest to react was Reds’ Johnny Sanchez who got a shot on target. Within a few minutes, Rovers levelled through a spectacular diving header by Fabian Munoz from a set piece.

Cambridge ensured a half-time lead with their second goal in the 35th minute, a strong header by Adam Brady from a corner. The Reds could have extended their lead in the 40th minute when Taylor found the net, only to have the effort ruled offside. 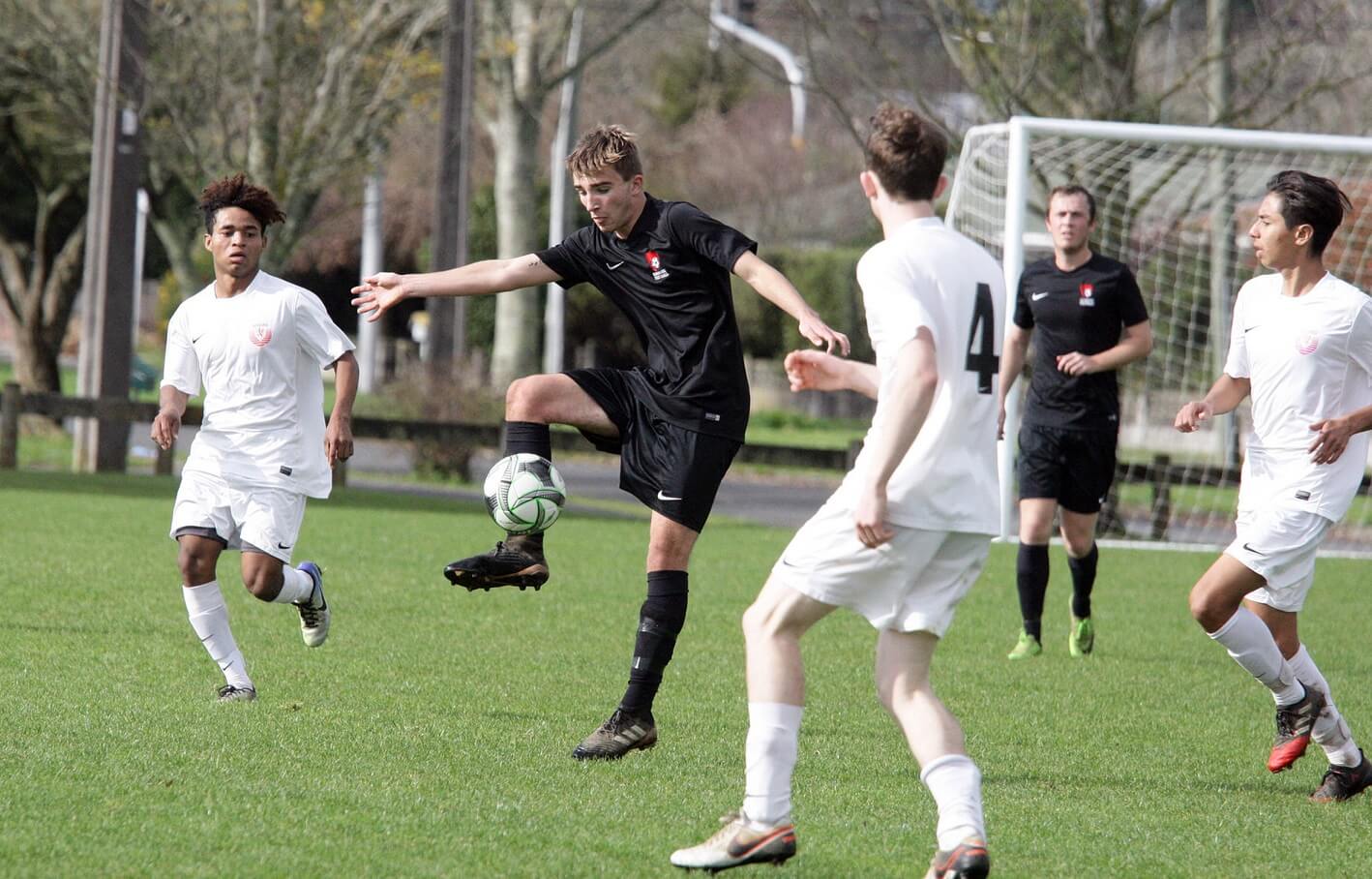 Cambridge began the second half strongly and Brady picked up his second goal of the game, smartly drilling the ball past the Rovers ‘keeper in the 50th minute.

After an hour, the Reds were awarded a penalty, but Taylor ballooned it over the crossbar.

Taylor compensated for his error and took the score to 4-1 in the 68th minute, making a well-timed run into the box and clipping the incoming ball into the net. It was his 16th goal of the season.

With five minutes to go, Rovers picked up a consolation goal, but the three points safely belonged to the Reds.

Cambridge men’s A beat Ngaruawahia United 3-2 at Centennial Park, thanks to goals from Peter Buesnel (2) and Diego Eguren.

The Cambridge D2 team lost 6-4 at home to Te Aroha Cobras while the D1 side won by default against Tokoroa.

Cambridge’s women’s team kept their perfect start to the Waikato Women’s A League with a come-from-behind 5-3 win at Northern United.

After winning promotion to the A division in mid-season, Cambridge have now won twice at the higher level and are chasing the title they won last year.

Cambridge fell behind after only three minutes. No sooner had Cambridge drawn level than the home side went ahead 2-1, forcing Cambridge to stage a revival late in the first half so they turned around with a 4-2 lead.

The teams played out an even second half, each scoring once, for a final score of 5-3 in Cambridge’s favour.

Cambridge’s goals were scored by Astrid Howarth (2), Rachel Hill, Maria Cameron and Maddy Burnett, who found the net for the first time in senior football.

Coach Andrew Taylor said the stand out performance came from midfielder Gemma Martin who he named as Hill Homes Player of the Day.

Next Sunday, Cambridge get their first home game in the A division when they host West Hamilton United at John Kerkhof Park (kick off 11am).