Not a dry eye at Blind Eye The Cambridge Repertoire Society’s latest show Blind Eye kicked off over the weekend, playing its first two public shows to a packed audience at the Gaslight Theatre. Often featuring comedy shows, this month’s show – directed by a familiar face at the Gaslight, Mike Williams – follows a more gripping tale of two elderly lovebirds and the unravelling of their seemingly simple lives. 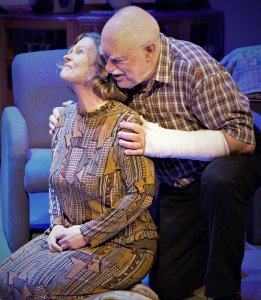 “It’s pretty intense,” Mike said after their final rehearsal to a select audience last week. “I did hear some reactions to the bomb shells as they went off on stage… you could have heard a pin drop.”

The show features a strong four-person cast, Hamilton’s Clive Lamdin (Wally Matthews) and Joanna Bishop (Vera Matthews), and Cambridge’s Dave Stearns (Sgt Patrick Warburton) and Karen Carroll (Alice Dempster), in a touching drama peppered with light moments of comedy, which soon turns into a mystery of unknown ends with a final twist that will no doubt make your jaw drop.

The connection between the main characters in the show, Wally and Vera, is quite touching and sometimes heart-wrenching, with a brilliant portrayal of a long-married couple who truly love each other. “It just happened, it was just an instant relationship,” Clive said of their performance on stage. “It helps that Clive is a really likeable chap,” Joanna laughed.

“For me its nice working with new people that I haven’t worked with before, and with a new director, Mike’s done a fantastic job,” said Dave, who starred as a dead man alongside Mike Williams in last year’s show, Out of Order. It’s the first time Mike has sat in the director’s seat, drawn by the brilliance of Blind Eye, written in recent years by New Zealand playwright April Phillips – whose comedies Stiff and Death & Taxe$ have also been staged at the Gaslight Theatre.

“When I first read it I literally didn’t put it down,” Mike said. “She’d been known for so many comedies… I thought, this has come from a totally different place for her, and it just captivated me.” 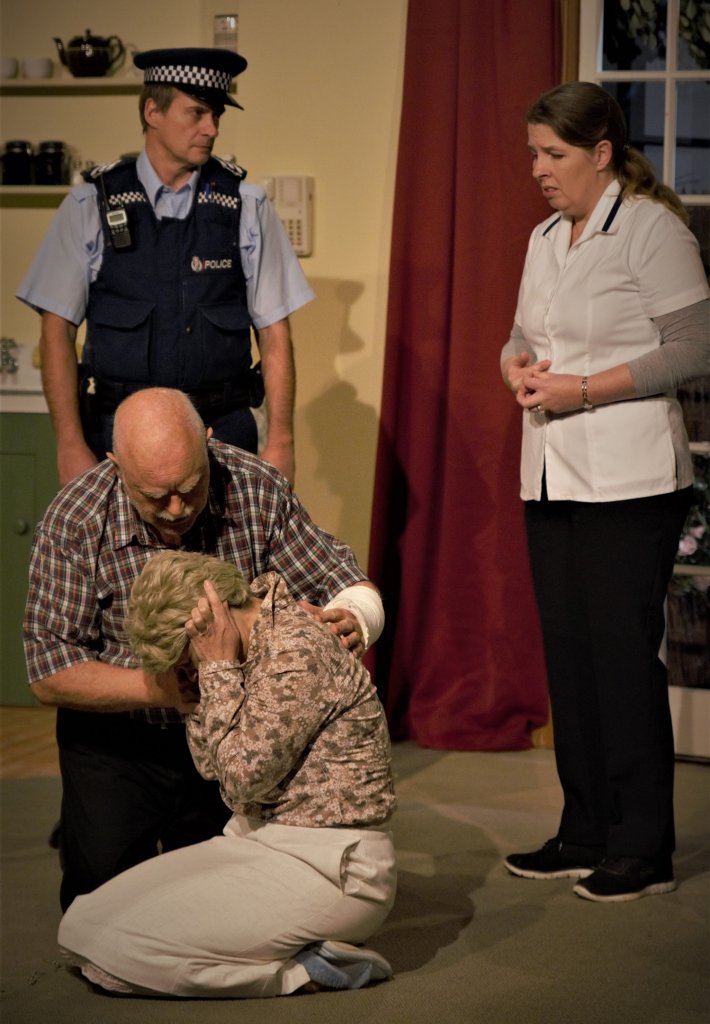 Mike contacted Phillips about the Cambridge Repertoire Society’s production of Blind Eye, and was delighted to learn that she planned to attend the final show on June 23, along with her husband, the original 2016 director and the original Wally actor. “They wanted to see what we did, but it’s great,” said Mike. “That’s the great thing about a New Zealand play, you can talk to the author and find out stuff. I only sent her a couple of emails… and she said tell me when it’s on, I’d love to attend as long as I don’t freak the cast out!”

Asked to describe the show simply, Mike said, “The tagline on the poster is, the truth’s not always black and white, so I’d like to suggest to people that they’re going to see more than what they bargained for, and that not everything is as clear as it sometimes seems.”

One audience member summed it up perfectly, “It’s very thought provoking,” he said.

“It’s definitely a thinking play,” said Karen. “For me it’s the first time I’ve done something emotionally challenging, so it just keeps you thinking the whole time, trying to keep it real.”

“I liked the enhancing development of my role,” said Joanna, who pulled off a rather accurate and moving portrayal of a blind woman developing dementia. “The challenge of the role of Vera, that’s probably what I like the most, it’s probably the most challenging role I’ve ever done.” Hamilton’s Joanna Bishop and Clive Lamdin give a gorgeous portrayal of an elderly couple in love. Photo – Peter Tait.

The show continues this weekend and next weekend. For show times and tickets, visit www.eventfinda.co.nz or Paper Plus Cambridge.