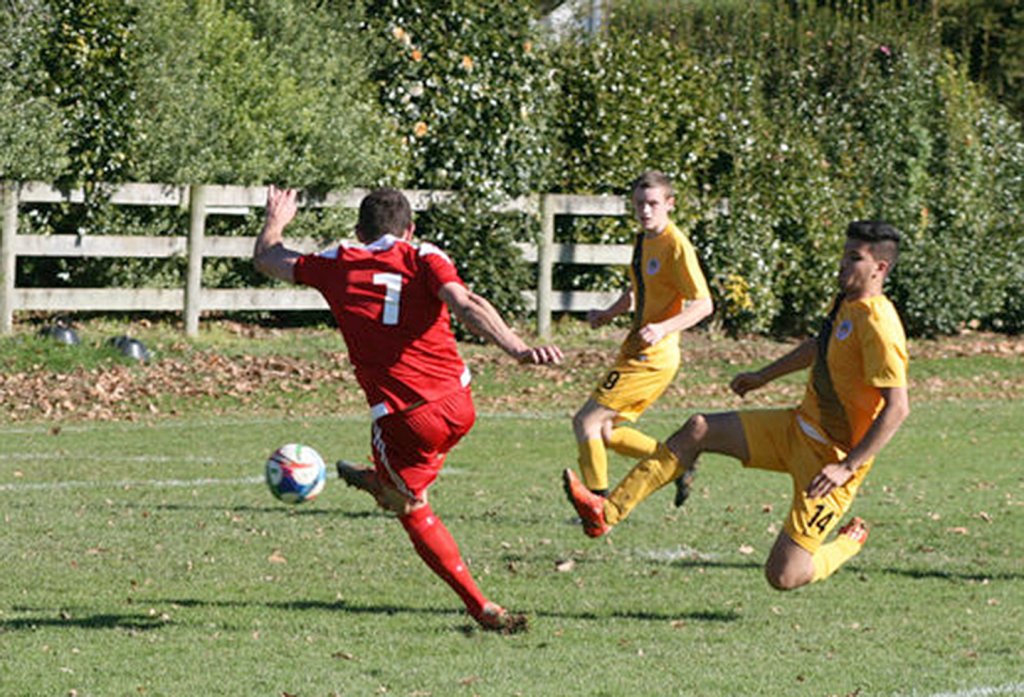 Cambridge’s goalscorer Aaron Huesser lines up a shot at the Ngongotaha goal.

Cambridge footballer Kieran Hill picked the right time to end a 10-month goal drought when he scored a dramatic last-minute goal to earn the Reds a 2-2 draw against old rivals Ngongotaha.

Current Waikato/Bay of Plenty champions, Cambridge were trailing Ngongotaha, the 2016 champions, 2-1 with time running out when Hill stepped up to take a direct free kick. The experienced Hill (32) saw the Ngongotaha defensive wall was poorly set up and he neatly curled his left foot shot high into the goal. It may turn out to be crucial in Cambridge’s efforts to consolidate their position in the Lotto NRFL second division, keeping Cambridge in mid-table, ahead of four teams, including Ngongotaha, struggling to avoid the threat of relegation from the Northern League.

The match at John Kerkhof Park started after a well-observed minute’s silence by players and spectators, in honour of long-time supporter Hank Kerkhof whose funeral was held only hours before the game.

The Reds struck first with a well-taken goal from Callum MacLeod in the 11th minute. Five minutes later, Ngongotaha levelled from the penalty spot with Yamil Casas sending Cambridge ‘keeper Fraser Nicholls the wrong way. Midway through the second half, the visitors went 2-1 up when Hayden Booker stole in from the left to hit an angled shot into the near corner of the Cambridge goal. That left Cambridge with 20 minutes of play to find an equaliser but the game took a major twist.

Cambridge midfielder Jamie Woodlock and Ngongotaha goalkeeper Andrew Gibbs went for a ball outside of the penalty area and in the process, Gibbs suffered a bad leg injury. Woodlock was given a straight red, leaving Cambridge with 10 men for the rest of the match. Play was held up for 20 minutes while Gibbs was treated and eventually stretchered off the pitch.

Once the game re-started, in failing light, Cambridge threw everyone forward and with time almost up, won a direct free kick 20 metres from the Ngongotaha goal. Hill stepped forward and scored for the 11th time in his five seasons with the Reds.

In the men’s Waikato Division A, Cambridge won a nine-goal thriller 5-4 against Claudelands Rovers.

In the Waikato men’s Division D, Cambridge D1s beat Melville United 2-1 at Gower Park, thanks to two goals from Scott Jenkins, one of which was a penalty.

Meanwhile, Cambridge women’s team have made an impressive start to their schedule in the Waikato Women’s A League. Having been promoted from the B division, Cambridge beat Hamilton Wanderers 6-1 at Porritt Stadium.