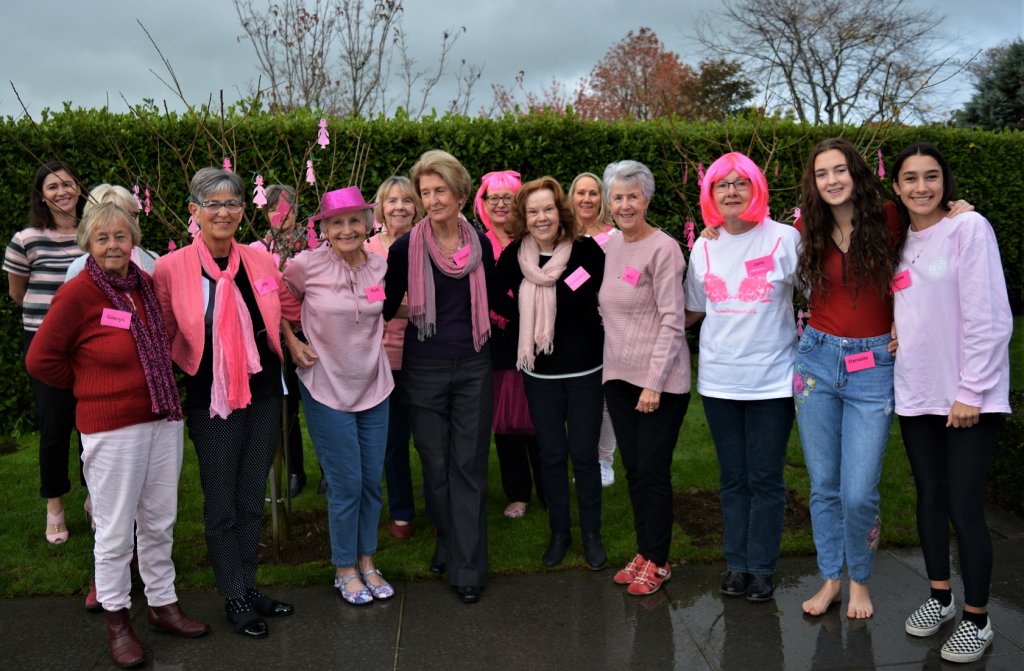 Breast cancer survivor Ruth Pidwell (in the pink hat) with the group of women who attended her May 26 Pink Ribbon Breakfast.

Ruth Pidwell spent the last Sunday morning of May awash in a sea of pink.

The two-time survivor of breast cancer hosted her first Pink Ribbon Breakfast, joined by family and a group of 16 women who had either faced the disease themselves, or known others who had. As well as enjoying a feast prepared primarily by the menfolk in the family, guests acknowledged those touched by breast cancer by writing their names on pink card cut-outs and hanging them on two bare cherry trees fringing Ruth’s patio.

“We were coming together as much to respect their struggle as to create awareness around the disease itself,” she said. “Would you believe, for example, that nine women a day in New Zealand are diagnosed with breast cancer, or that there is a 95 percent chance of survival if you can just catch it early enough?

“These are such important messages that women need to hear.”

Ruth’s silver service breakfast included a silent auction. “I walked around Cambridge and was overwhelmed at the generosity of local businesses.”

Ruth’s efforts netted over $1500 for the Breast Cancer Foundation. “That’s three times what I had expected … we’re delighted with the result.”

Becoming a breakfast host this year came about almost by chance. Ruth’s own journey began in 2003, when a lump in her left breast was picked up via a mammogram when the couple was living in Melbourne. “Initially, I was quite sanguine about it, probably because I had identified lumps and bumps before that had turned out to be benign.  Strangely, I hadn’t even felt this one … I was shocked when I was told it was a tumour.”

She had a lumpectomy followed by six weeks of radiotherapy and further medication. As she approached the fifth anniversary of that first incidence, just as she thought she was in the clear, Ruth found a tiny lump in her right breast. It was so difficult to detect that it took two surgeries to find it.

Having survived breast cancer twice and squared up to the hair-trigger distress of staring cancer in the face, Ruth is more determined than ever to spread the word on the importance of regular check-ups.

“The mammogram didn’t find that second lump, nor could the doctors.  But I knew what I had felt, and they believed me enough to keep looking.  Nobody knows your breasts like you do; checking them needs to become automatic.  I do it on the first of every month.”

Ruth has also gone teetotal, giving up alcohol except for “high days and holidays”. That’s because research has shown that the consumption of alcohol can be a factor in breast cancer, she said.

“I decided that was something I could control, so I did.”