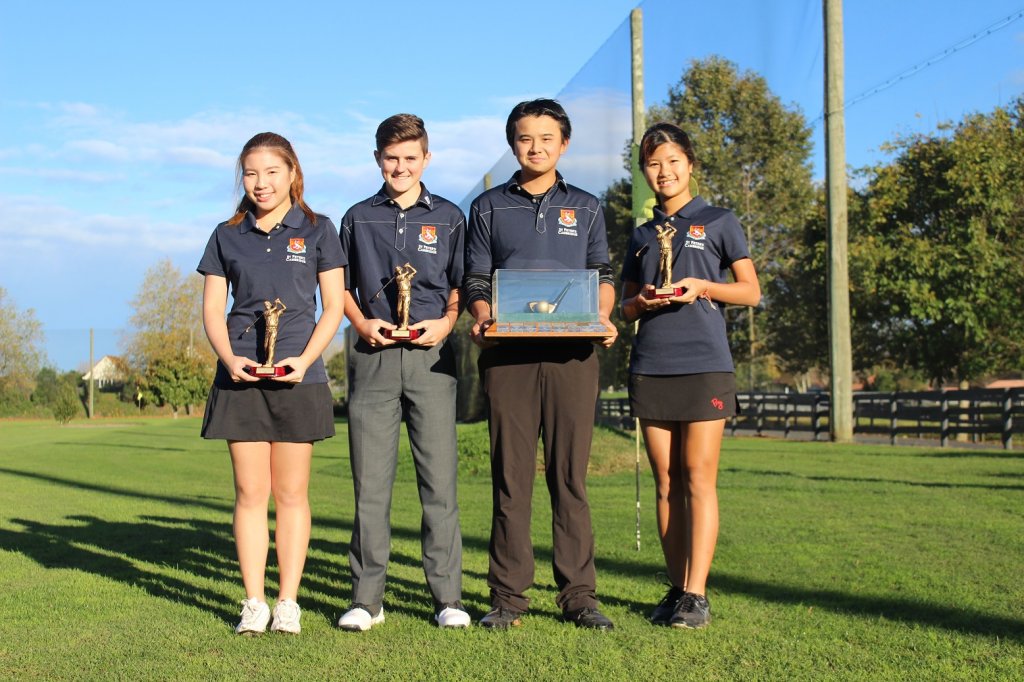 St Peter’s School’s top young golfers have secured a spot at the National Secondary Schools Team Championship after winning the regional round at Hamilton Golf Club on May 14 – the eighth time the school has won the reginal competition since 2006.

“The was a little bit of stress before starts,” Focus laughed. “Because this year we had our chance to beat Hamilton Boys’. We had a stronger team this year, so we knew we had a chance.”

Team captain Focus led the way winning the individual title by 6 shots, and producing her usual high-quality golf recording a 3 under par 69. Amazingly, she even pulled off a hole-in-one on the difficult par 3 third hole, and later produced a 30-metre chip in for eagle on the par 4 16th hole.

The Hamilton Boys team started off well, hot on the heels of the St Peter’s quartet by only one or two strokes throughout the first nine holes. “We were just in front,” Oak explained. “And then the back nine is much harder than the front, so anything could have happened.”

The second half included a few shorter holes – a specialty for the hard-hitting, Happy Gilmore-styled Hamilton Boys’ team, who can drive the ball quite far on their first shot.

“There were a couple of holes that Ham Boys can hit it quite close, so they sort of had a better chance than us,” said Focus. But she and Ing are also skilled in driving the ball quite far during tee-off, and they utilized the closer women’s start to get as near to the green as possible. “I was just trying to play as best as I can,” said Focus.

“It was just patience really,” added Oak. “Some of us had a feeling that they would blow out in the end, because we’ve played with a few of their players and they have done that before, so all we needed to do was hold on, and just wait for them to basically break down under the pressure.”

Eventually the team’s cool-headed and perfected golf play proved too much for the Hamilton boys, with St Peter’s winning an impressive 15 shots ahead. Following in third place was the St Peter’s #2 team of Jared McEvoy, Scott Donald and George Hodgson.

“I feel like we’ve come a long way as a team,” Oak said. “Our performance in the regional qualifier has definitely lifted our hopes up of winning (at Nationals), because we know now we can perform together.”

It will be the second time Focus has competed at the national competition, having won it in 2015 at 13 years old with the St Peter’s team. “I was so scared that time,” Focus laughed. “Now I know how they (Ing and Rhys) feel.” The shy junior pair said they were very happy with their performance at regionals.

The team will compete at the National competition in Palmerston North in September.