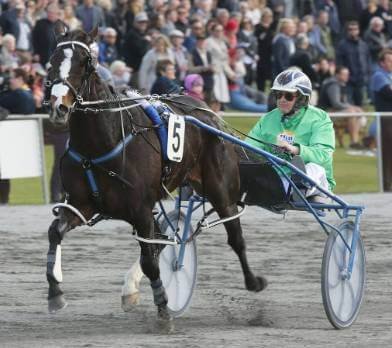 Shez All Rock is the first Australian horse to win in the Harness Jewels in Cambridge on Saturday. Photo – Trish Dunell.

Shez All Rock made her way into the history books when she became the first Australian horse to win in the Harness Jewels last Saturday at the Cambridge raceway.

Mark Pitt was full of pride for his girl, Shez All Rock, when she fought her way into the history books.

Pitt made the tough decision to sell Shez All Rock to ex-pat Kiwi and now US-based horseman Chris Ryder after her heat and final win of the NSW Oaks.

Since the sale she was a won a heat and final of the Victoria Oaks, NZ Oaks final and now the Group One Harness Jewels.

“Of course, you have moments of mixed emotions after selling her, but I can tell you it felt just as good watching her win that yesterday as it would’ve still owning her,” Pitt said.

Current plans for Shez All Rock are to return home for the Vicbred series and Breeders Crown.

“Everything will need to fall into place for the Vicbred because it is a tight turnaround and the heats aren’t far away,” Pitt said. “But if it works she’ll be in it.”

The Vicbred heats are at Kilmore on June 20 before the Group One final at Melton on July 7.

“The ability was there early, but I couldn’t get her going so sent her down to Emma and Clayton and they turned her around,” Pitt said.

When Shez All Rock came second at Cobram on February 5 – her only defeat- that is the race that took her to another level in Pitt’s mind.

“What she did that day, to get so close from an impossible position when underdone left me thinking she was special.”