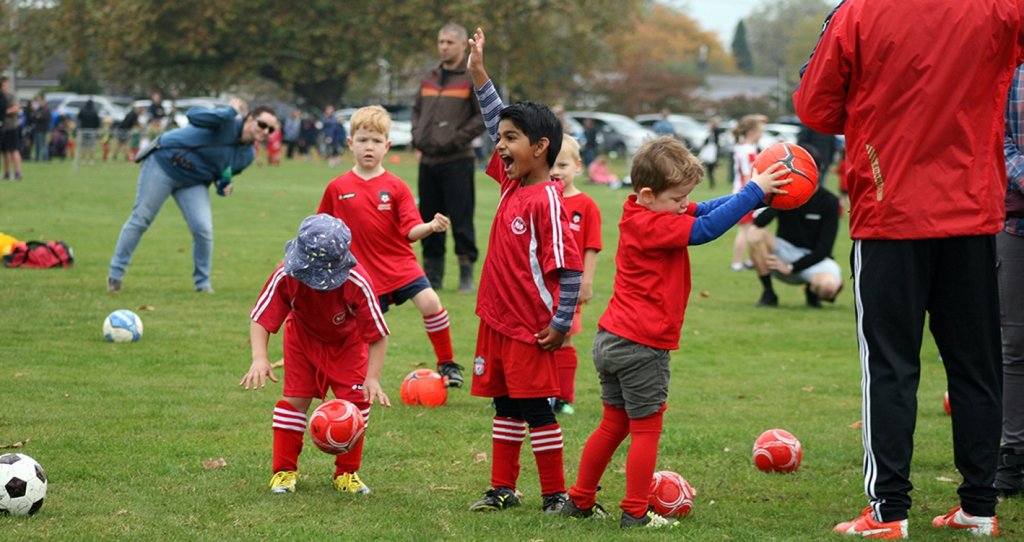 The Cambridge Football Club staged the opening day of the season on Saturday where more than 450 children began their winter football.

Cambridge head coach Mike Woodlock hopes to end his 10 years with the town’s football club on a high this weekend as the Reds face their biggest match of the season. After coaching at Cambridge Football Club since 2008, Woodlock has decided to “put his feet up” and hand over the coaching role now the Reds are back in football’s Northern League.

Saturday will see Woodlock’s last appearance in the coach’s dugout at John Kerkhof Park when Cambridge face Waiheke Island in the national ISPS Chatham Cup, which is football’s oldest cup competition. The club has appointed Paul Richardson as Woodlock’s replacement.

“The club’s in good hands,” Woodlock said. “If I’d stepped aside at the end of last year, I wouldn’t have been sure we had the continuity and depth in the coaching group to go forward,” he said.

The arrival at the club of Richardson and reserves’ coach Mike Taylor had strengthened the line-up and Woodlock said he was now confident the club would continue its advancement. Richardson joins an experienced coaching team that works with the club’s top three men’s teams.

Kim Brierley has been the club’s goalkeeper coach for five seasons and Chrissy Goodin is in her third season as first team manager. The reserves are coached by Taylor, assisted by Nick Sickelmore and team manager Des Beeney. Brierley and Taylor have had considerable experience at Northern League and National League levels, highlighting the depth of coaching support at Cambridge. Local kids had a ball on Saturday as the winter football season got underway.

Richardson has been coaching the club’s WaiBOP Championship side with assistant Steve Thomas. He joined Cambridge this year after three successful seasons at Matamata Swifts, where he took their first team from the threat of relegation in 2015 to runners-up spot behind the Reds last season.

“There’s lots to get our teeth into as a coaching team and I’m looking forward to working closely with the wider coaching group to get a decent platform in place, going forward to make us the players’ club of choice.

“I’m also extremely honoured to be given the opportunity to coach at such a fantastic club, rich in history and with a fantastic group of volunteers who work tirelessly to support the players.”

Woodlock hopes Saturday’s cup tie, which kicks off at the earlier-than-usual 2.30pm, will help the Reds recover their form after four successive losses in the Lotto NRFL second division.

The Waiheke Islanders have built a reputation for becoming one of the best-supported clubs in the country with hundreds of supporters travelling to get behind their team with flags, banners and coloured smoke. It promises to create a fantastic atmosphere at John Kerkhof Park. In last weekend’s matches, the Reds had a disappointing trip to South Auckland where they lost a double header against Franklin United with the first team losing 8-1 and the reserves going down 1-0.

Cambridge’s women’s team got the better of Huntly Thistle in a high-scoring match which saw them win 5-3. Gemma Martin scored the first for Cambridge with a long-range effort.

Leading goalscorer Rachel Hill scored two goals in succession for Cambridge after good build-up play. Caitlyn Varcoe produced Cambridge’s fourth goal giving her side a useful 4-1 lead at half-time. In the second spell, Hill completed her second hat-trick of the season, finding the net with a clever back heel. The Hill Homes Player of the Day was Chrissy Goodin.

Meanwhile, more than 450 children began their winter football when the club staged the opening day of the season on Saturday.