After six years’ waiting for his chance to play Northern League football, goalkeeper Fraser Nicholls has finally made his debut in the competition.

Nicholls suffered a serious head injury during Cambridge FC’s pre-season programme and was forced to miss the Reds’ return to the second division, with a broken cheek and eye socket requiring operations to fit four plates and insert 15 screws before he resumed training.

His patience paid off last weekend when he was in the Reds’ starting line-up for their 2-2 draw against Northland FC at John Kerkhof Park.  His opportunity followed an injury to Cambridge’s other first team goalkeeper, Patrick Steele, who has shown impressive form since signing from Matamata Swifts at the start of the season.

Despite their long journey to Cambridge (the Northland bus left at 6am), the visitors started the brightest and deservedly went ahead after only nine minutes.

Cambridge gradually got into the game and deservedly drew level late in the half when defender Daniel Clarkin got onto a loose ball in the box after a free kick put the Northland defence under pressure.

Northland had another good spell early in the second half and went 2-1 ahead after 63 minutes with the goal of the match, a controlled volley from 20 metres by Kyran Winterburn.  For the rest of the match, Cambridge had most of the play and kept up the pressure for an equaliser.

It finally came when Elliot Cooper scored his first goal for Cambridge since signing from Takapuna, a well-taken finish in the 78th minute which gave Northland ‘keeper Shane Stanners no chance.  Both teams had opportunities to steal the win, but the rival coaches considered a draw the fair result.

The Reds are at home again this Saturday when Auckland’s Te Atatu visit a double header. The reserves’ game starts at 12.30pm followed by the first teams fixture at 3pm.

The Cambridge reserves beat Northland 4-0 on Saturday to extend their lead at the top of the Lotto NRFL reserves competition.  Andrew Taylor scored twice, taking his season’s tally to 11, with Adam Brady and Shaun Richardson providing the other goals.

The Cambridge women’s team moved through to the next round of the Waikato Women’s Cup with a comfortable 5-0 against Matamata Swifts.  Chloe Zuppicich opened the scoring after 24 minutes with a neat header over the Swifts’ goalkeeper. 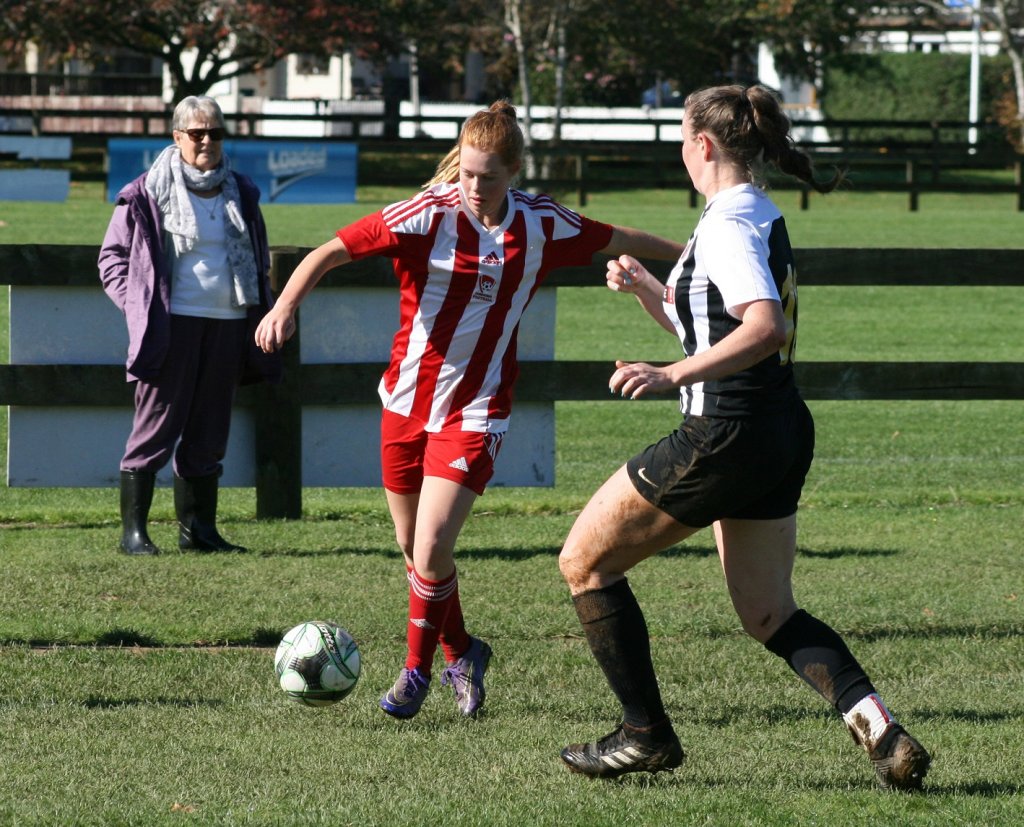 Cambridge’s Player of the Day, Gemma Martin, takes on the Matamata defence.

Leading goalscorers Astrid Howarth (2) and Rachel Hill (2) finished off the job for Cambridge who can earn promotion to the Waikato A division with a win or draw this Sunday against Waikato Unicol.  The Hill Homes Player of the Day was Gemma Martin.

Cambridge’s Waikato A team were knocked out of the Waikato Cup, losing at home 3-2 to Claudelands Rovers B.  Peter Buesnel and Mitchell Claridge scored for Cambridge.

The Waikato D2 team lost their first round Waikato Plate tie 5-4 in a thriller against Putaruru Rangers.  Andrew Myers (2), Luke Masric and Rob Dixon found the net for Cambridge while their fifth goal was a spectacular long-range own goal from a Putararu player.

Meanwhile, the club’s newly-launched Future Reds programme is proving a success with young players.  Run in partnership with the Ricki Herbert Football Academy, the programme aims to help boys and girls aged 6-13 progressively develop their skills through extra sessions with qualified academy coaches.  Already, more than 110 youngsters have joined the Future Reds programme from the pool of more than 450 junior players registered with the club.