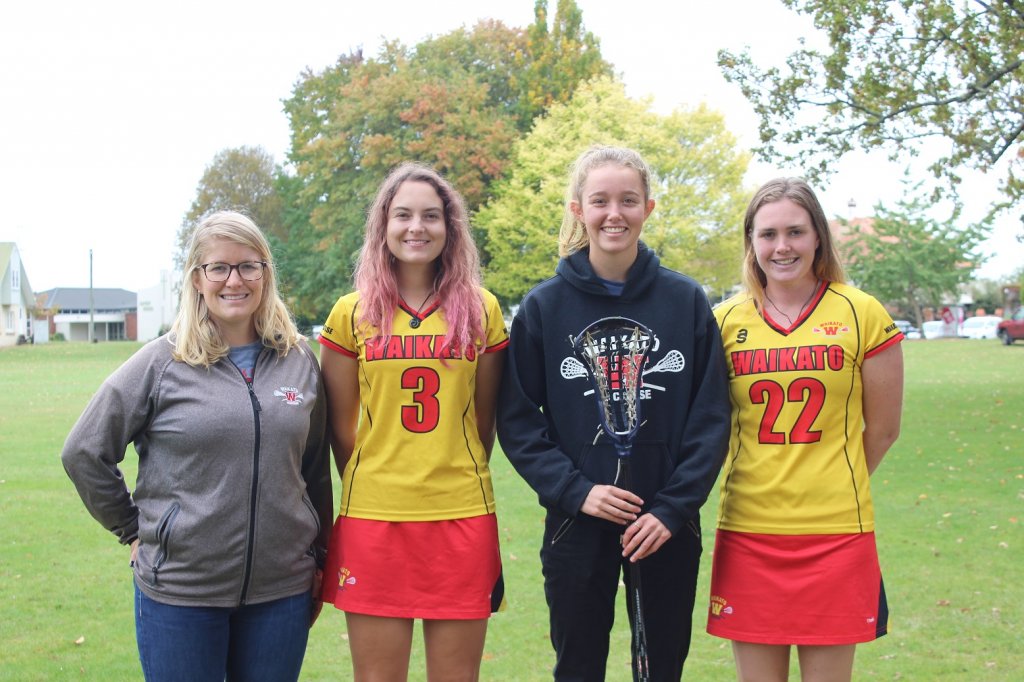 It was the best result so far for the Waikato Women’s Senior lacrosse team that competed at the national tournament held last month in Wellington, finishing in a very close second place overall after losing 11-12 to Auckland in the final.

Ten players in the 18-woman team were from Cambridge, Alannah Mouat, Alice Wheatley-Wilson, Alyssa Hale, Amber Hope, Anri Kruger, Sophie Unsworth, Taylor Jakeman, Ursula Johnson, Alice Hill and Becca Bryan. We caught up with the latter three, Ursula, 28, Alice, 17, and Becca, 21, along with their American coach Lindsay deMuth, in town last week to find out how it all went.

“I think it’s definitely the best result we’ve had against them (Auckland), because we’ve never been so even with them before…  it’s probably the best tournament we’ve played,” said Becca, who has played on the team since 2011.

Auckland’s senior women’s team has dominated the tournament since its inception in 2011, winning it most years. But the Waikato team gave them a run for their money this year, with the lead tossing between the two teams throughout the final game.

“It was kind of like, they would score, and we would score, back and forth,” explained Lindsay. “It was awesome seeing what we had done in practice translated onto the field, everyone just worked well together, they really came together and played some awesome lacrosse.”

The Waikato team played five games in all, winning three, and finishing in a draw in the third round, against the same team that beat them in the final. “I think initially it was intimidating (playing against Auckland) but once we realised we were on an even par with them, when we drew with them, we were like oh we actually could beat them.

“It’s been us and them in the final for the last few years, and we’ve lost every single time, but this last nationals was the one where we’ve gotten the closest to them, and so next year we’ll win!”

“I think everyone played well,” said Ursula, who has also been on the team since 2011. “We can all be really happy with how we performed.”

“It was a really well fought game,” Lindsay added.

“And we bonded really well as a team,” said Alice, who is in her fifth year of playing lacrosse. “Because we’re all such different ages and different experiences, I was real happy with how well we played together, and even off field too, it was really cool.”