The Cambridge Health and Community Centre on Taylor St is a hive of activity on Sunday afternoons, with a dedicated group of volunteers getting together to sew Boomerang Bags – the reusable bags popping up around town. Claire Castle popped in to catch up with the eco-warriors, saving the world one bag at a time. 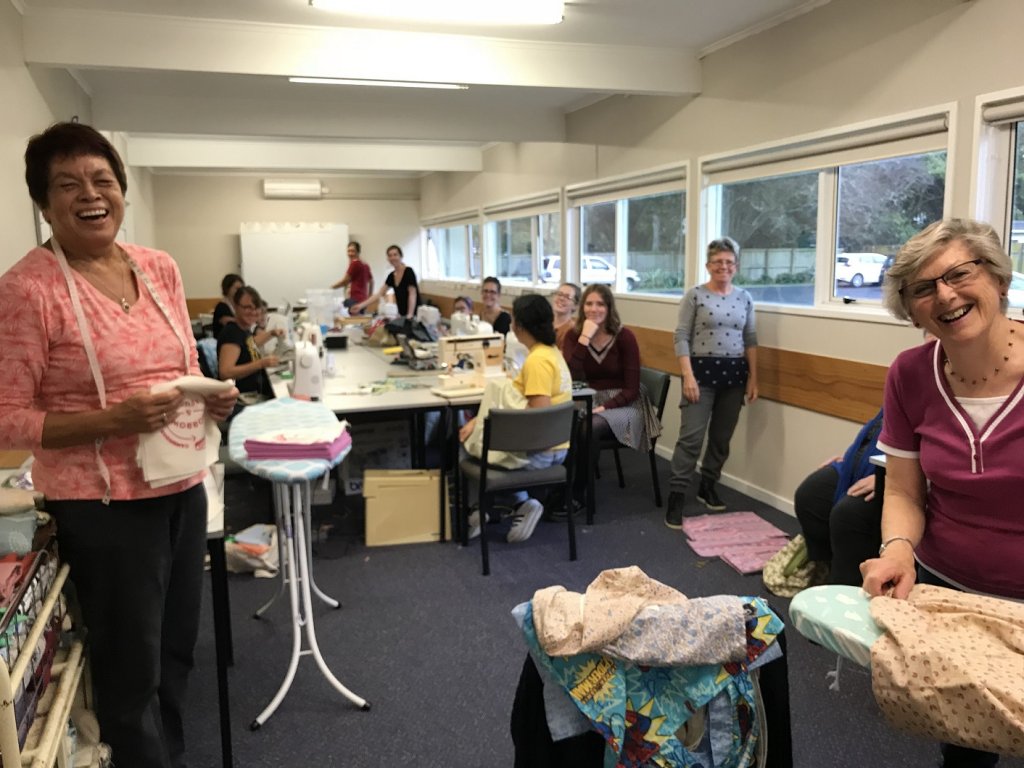 Myra Dost (left) and Dot Harding (right) with the volunteer crew at Sunday’s sewing bee at the community centre, adding to their impressive total of Boomerang Bags.

Sewing machines were whirring and, down the back, patches for the bag were being screen printed with the Boomerang Bag logo. It’s a social event as well, however I had arrived too late for coffee and cake and the quiz on cake that followed – a rookie mistake on my part.

Since the Plastic Bag Free Cambridge group launched the initiative in December, they have produced around 1750 bags. With each bag taking around 45 minutes, that’s a staggering 1312.5 hours’ worth of work to get the bags into circulation. And organisers hope each one of those bags is being used instead of a plastic bag. “We’re going great guns,” organiser Linda Weijers said, and the group is showing no signs of slowing down. Treasurer Helen Parker even has a graph – on proper graph paper no less –  that’s tracking the group’s progress, and it shows a real spike in production lately, with 550 bags produced last month and more than 600 completed this month. 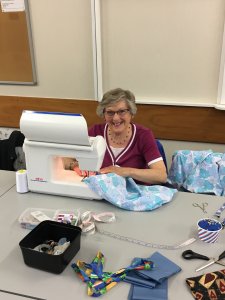 Dot Harding has whipped up more than 400 bags.

Feedback from the community has been encouraging, Plastic Bag Free Cambridge member Sam Brydon said, with the volunteers getting encouragement seeing Facebook posts of recipients posing with their bags. “We’d love it if people could keep doing that, it really keeps us going,” Sam said.

And the community is really getting into it, too, with a stack of fabric and patches delivered to Cambridge Middle School to get the students onto it, and a workshop is apparently on the cards for Karapiro School this term. Organisers said they are grateful for fabric donations, acknowledging strong support from the Cambridge Lions.

Also still going strong are the produce bags, an initiative Sam started up last year, with 1,150 produced and distributed through Vege Fresh in town and Forage on Empire St. “Everyone has shopping bags, but I think people don’t have produce bags,” Sam pointed out.

The single-use bags for fruit and veges are arguably worse than the ubiquitous shopping bag, considering they are far less useful for anything else after that.

With stands at Wholly Cow, New World and Fresh Choice, the Boomerang Bags are quickly snapped up by shoppers who have forgotten their reusable bags. You can take the bag home and keep it or bring it back and rehang it on the “bag tree” for the next shopper without a bag. Not the same as cranking out 400 bags, such as group stalwart Dot Harding, but leaving one for the next person still feels a bit virtuous nonetheless.

If you want to join in, the sewing collective meets on Sundays from 1.30pm at the Community Centre on Taylor St – bring your own sewing machine, with training provided and possibly cake as well.