Tasman Wakelin with his 17yo boys’ trophy and plate from the NZ Nationals.

Tasman Wakelin was one of seven Cambridge riders to win national titles at the BMX National Championships over Easter weekend, an impressive feat considering the Cambridge High School student was the youngest in his league, taking out the title for 16-year-old boys.

Fifteen-year-old Tasman will join fellow Cambridge BMXers Bennett Greenough, who finished first for 13-year-old boys, and Tia Hastings-Thurgood, who finished fourth for 15-year-old girls, as part of the NZ Senior Development team competing in round two of the Australian National Series this weekend. Having already finished first in his category during round one of the Australian Nationals in February, Tasman aims to finish on top in all four rounds to claim the title of 16-year-old boys’ champion in both New Zealand and Australia.

The six other Cambridge riders who earned top titles at the New Zealand Nationals were Meg Cannon (8yo girls), Leila Walker (13yo girls), Jack Greenough (13yo boys), Bennett Greenough (15yo boys), Charlie Lester-Rosson (16yo girls) and Tim Ferguson (35-39yo males).

Tasman also competed in the Super Nat category at the NZ Nationals – going up against the NZ’s top elite riders. He finished first in all of the qualifying rounds but was cut out from the lead during the final race.

“I still pulled off a 5th, so I was happy,” said Tasman. “I didn’t drop a lap all weekend, so I was pretty stoked about that.” 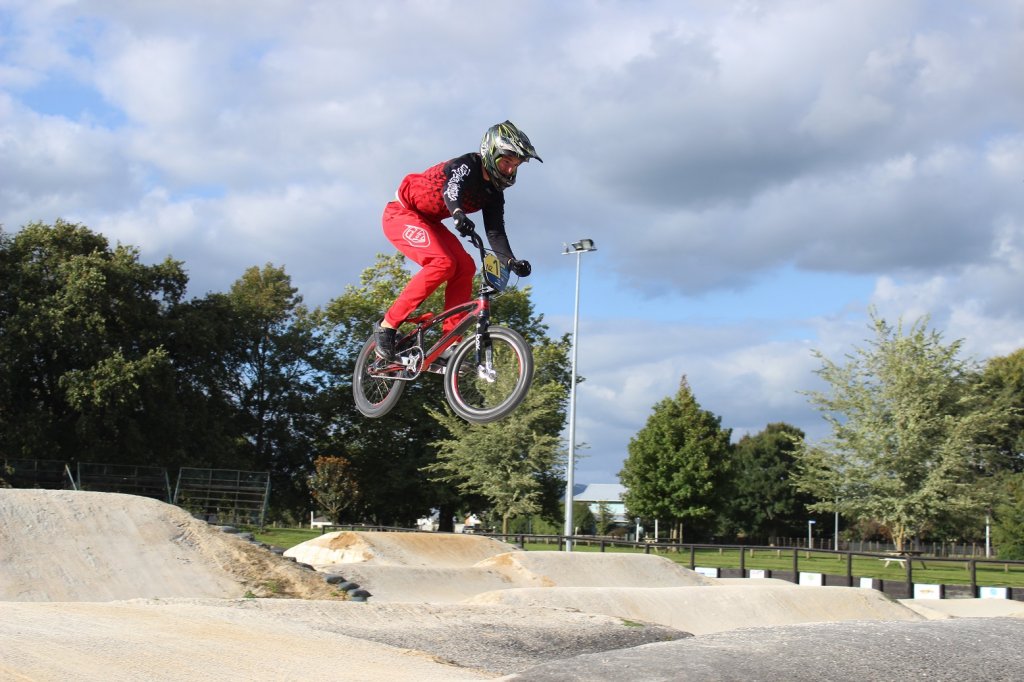 Tasman Wakelin in action at the Cambridge BMX track.

Having competed in nine New Zealand championships, it was the first time Tasman secured a national title. “I was really stoked, since I’d never done that before,” he said. “It’s fun, racing (at Nationals). It’s the most enjoyable part of BMX… and obviously the result adds on to how good the experience was.”

Tasman’s name will be added to the trophy, which already includes the name of his coach Kurt Pickard, who won the same title in 2007.

“Really that just opened the door for him to now go to the worlds,” said Tasman’s mum Lisa. “We decided, and he decided, that if he managed to get first, then worlds would definitely be on the cards… he’s been working really hard this year.”

After competing in the Australian Nationals, Tasman will compete at the world champs in Azerbaijan in June. “It starts to get a bit expensive, so we would really like to find some sponsorship,” Lisa said.

Anyone interested in sponsoring Tasman can email [email protected]

All in all, 53 Cambridge riders competed at the National BMX Champs in New Plymouth, with 25 riders placed in the top eight.