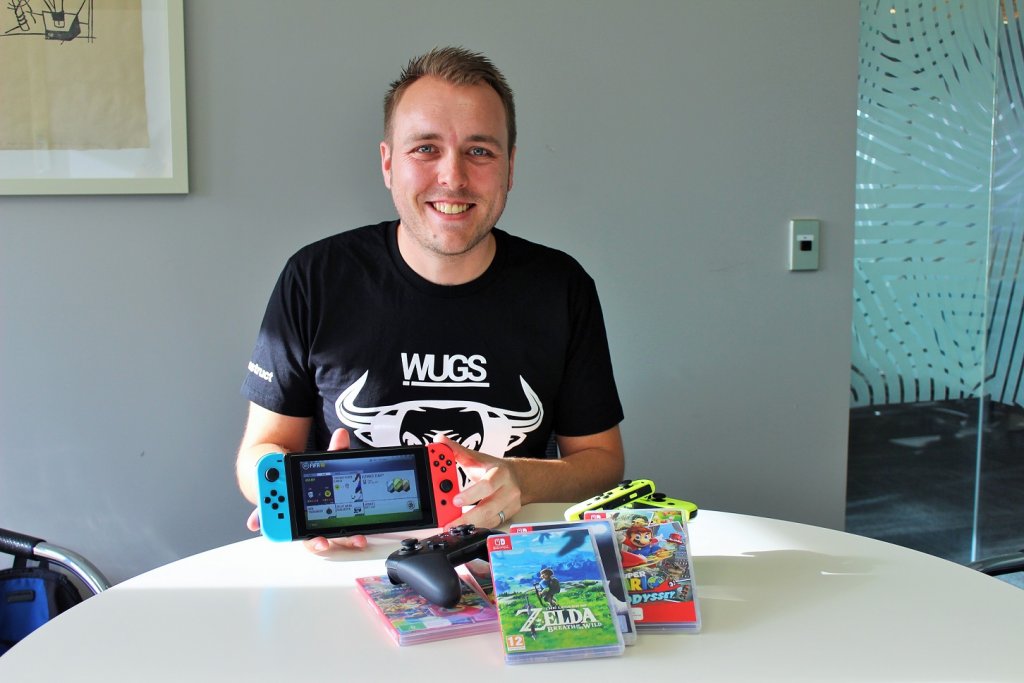 Cambridge local, Tom Featonby, pictured with some of the games available to play during the event.

The Waikato United Gaming Society, more affectionately known as WUGS, is working with the Hamilton Fighting Game Community in an effort to bring together hundreds of video gamers from around the country for epic battles and tournaments this weekend.

The event, dubbed Waikato Arena Rampage, will take place at SkyCity Hamilton from April 13 to 15, the first-ever major fighting game tournament in Hamilton. Several tournaments will run covering several different games, including onstage duels between some of the country’s top fighting-game players, battling classics such as Street Fighter, Tekken and Dragonball FighterZ, with games projected onto a big screen.

One aspect of the event features a classic “old school” computer gaming activity known as BYOPC (bring your own PC) LAN (local area network), hosted by WUGS. Tom Featonby, founder and president of WUGS, and a Cambridge local, said it’s the chance for gamers to get together and play favourites such as Fortnite, Blur, Garry’s Mod, Age of Empires II, Quiplash and heaps more, in a classic LAN setting.

“Back in the day LANs were really popular, because internet was absolutely terrible, you couldn’t really play online games together, so people used to bring all their computers together and play games that way, you would get like 400 or 500 people along to these events,” Tom explained. “So we’re going back to the roots and getting a bit more social interaction… actually getting gamers out of their houses and into a central location to play games together.”

Dubbed “WUGS at War”, the BYOPC LAN event will run from the Friday evening through to the end of Sunday, Saturday being the main game day where two tournaments will run – Overwatch and Rocket League – played in a one-on-one double round robin format where everyone will play everyone twice, each tournament winner receiving a minimum prize of $50 cash and a $50 PB Tech voucher. “The more entrants we get, the biggest that cash prize gets.”

“You can build really good bonds online together, but it’s that next-level of actually putting faces to names.”

The event is R16 unless accompanied by a guardian. To sign up for one of the onstage fighting game tournaments, visit www.waikato-arena-rampage.com. To sign up for the WUGS at War BYOPC LAN event, visit that same website and click on the bull head logo at the bottom left of the page. Entry is $35, spectators get in free.