Mike King, comedian and health educator, has been visiting schools throughout the country to encourage kids to ask for help and support their friends.

Mike King touched down in Cambridge recently with an important message for students at Cambridge Middle School.

The New Zealand comedian and now mental health educator rode into town on March 29 on a custom-painted Suzuki scooter as part of the 2018 I AM HOPE tour – where Mike and a group of friends were riding the 50cc motorcycles, painted by Kiwi artists with their interpretation of “I AM HOPE”, from Invercargill to Cape Reinga. Stopping in at 45 schools and community halls, Mike spoke to over 20,000 schoolkids and adults about mental health, and how anyone can be the “hope” someone needs when times are tough. Mike used his trademark humour to get his serious message across to the students at Cambridge Middle School.

“The truth is most people don’t ask for help, most people don’t go and tell their friends anything because they’re not sure who’s safe, they’re not sure the person they go talk to isn’t going to judge them, isn’t going to put them down, isn’t going to ask them a whole lot of questions they haven’t got the answers to, so we decided to invent something that signifies safe, and here it is,” Mike said to the crowd at Cambridge Middle School as he revealed the I AM HOPE wristband, given freely to all the students on the tour.

Students were also given stickers and rock-painting kits to help spread the positive message. 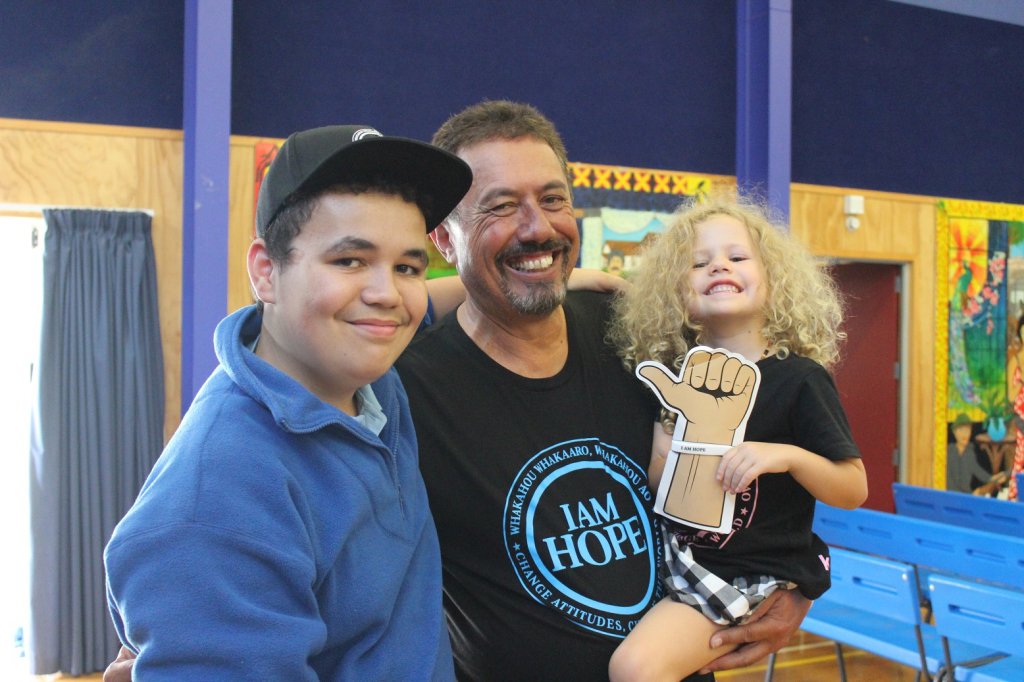 Te Ngahuru Jack-Maxwell (left) got the Cambridge Middle School I AM HOPE event started and welcomed Mike King on stage, pictured afterwards with Mike King and his 4-year-old daughter, Charlie.

The long-time comedian sprinkled humour throughout the more solemn speech, cracking a few jokes and silly stories whilst hammering home to students, “Everyone’s entitled to make mistakes, so forgive yourself and next time do the right thing… you’re all perfect, every single one of you.

Mike confirmed after the show that he had indeed travelled the entire trip on a scooter. “It’s better than walking,” he joked, adding that they even planned to go 30km out of the way to use a bridge in West Auckland, since they weren’t allowed to cross the Auckland Harbour Bridge on scooters.

Following his Cambridge visit, Mike and his band of scooters stopped at schools in Melville and Rototuna before heading further north to Auckland. Every student got to high-five Mike King on the way out, with his daughter, Charlie, joining in.