A day of fire brigade competition was held at Victoria Square on April 8.

After a full-on competition day at Victoria Square on April 8, the fire brigade’s volunteers and families returned to the station for a barbeque and awards ceremony.

The Bourke Trophy for pump bypass was won by the four-man team of senior fire fighter (SFF) Steve Russell, SFF Andrew Goodwin, FF Marcus Tidd and SFF Richard Crease. The team took just 60.21 seconds to run a hose from the hydrant to incident, then setting up a pump, disconnecting the water and running it through the pump. Fire fighter (FF) Peter Crawford (left) and qualified fire fighter (QFF) Cameron Black, winners of the Boyce Cup, a two-man event where competitors have to hook up a hose and hit a target. They won with a time of 38.79 seconds. From left, QFF Sam Van Der Valk; senior station officer (SSO) Dennis Hunt; FF Marcus Tidd; and SFF Richard Tidd, pictured with son Jesse, winners of the Myers Cup. This cup was for fastest breeching – joining one hose in with two coming out – a feat they achieved in 51.49 seconds. 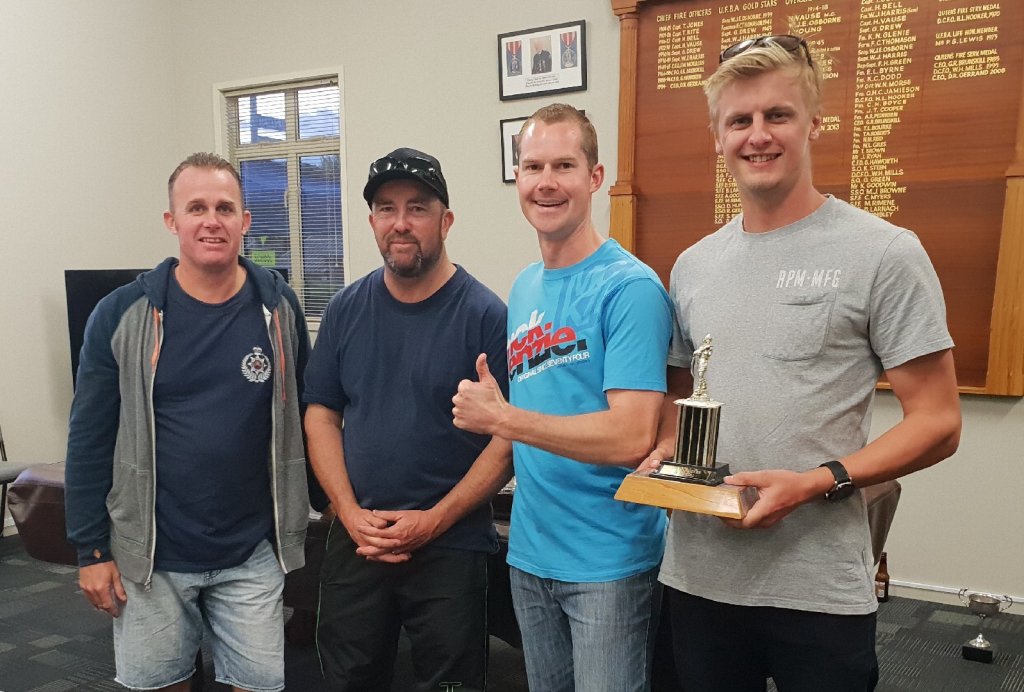 From left, the team of SFF Glenn Philip; SSO Richie Gerrand; FF Peter Crawford and FF Michael Graham took out the Bush Hooker Memorial Trophy in 72.90 seconds, by running the water straight into a pump, then taking two hoses out and extending it by one. SSO Richie Gerrand; FF Dylan Gould; FF Marcus Tidd and QFF Sam Van Der Valk took 103.03 seconds to fill a pit with water and then suction that out of the water, in the same way they would use swimming pool water to fight a fire.