Jan and Steve Dolan’s award-winning Bellefield Butters are popular at both the Cambridge and Hamilton farmers’ markets.

Tucked away in the curl of a Leamington cul-de-sac is a shipping container in which award-winning magic happens every day.

This is where Jan and Steve Dolan produce their cultured, artisan Bellefield Butter in a range of flavours.  Two products within that range recently won recognition in the 2018 Outstanding New Zealand Food Producer Awards. Their chilli and lime butter won a silver award, and their sea salt scored a highly recommended.

Being less than six months into production, it was the first time the Dolans had entered anything at all. Emboldened by such early success, they’re going to test more of their range by entering the upcoming Cuisine Artisan Awards.

“We’ve been going since October last year, so we weren’t expecting it,” said Steve. “But we have a great mentor, someone within the industry itself. It was suggested we enter some of the product in the awards to see how it went. We were absolutely thrilled to hear both the samples we sent in did well.”

The British-born Dolans started Bellefield Butter on the back of a change of circumstances.  They came to New Zealand about 11 years ago, keen to leave an England with their two children in search of a better life. Jan, who works in adult education, landed a job in this area and Steve quickly found employment in his field as a telecommunications engineer.  But a turn of events in 2016 saw them face redundancy within a week of one another.

“We had already been thinking about the butter business,” said Jan.

Steve had read about a producer making flavoured butters in Yorkshire and thought it might be something they could turn their hands to in the future. Back even further was a family history rich with Steve’s childhood memories of watching his aunt hand-churn butter on the family farm in Ireland.

“We children used to go outside and milk the cows and dig up the potatoes, then we’d watch her church it into butter.  It was always in the back of my mind that if I hadn’t gone into telecommunications, I might like to have worked on the land. It’s been there in the background, but with the timing around our jobs, we decided to go for it.”

Liverpool was where they were raised, met and married, and there that Jan remembers the story of one of her young aunts bringing home her date – the then unknown Paul McCartney of Beatles fame. “Her mother was unimpressed by his long hair … he was told to leave and never darken their doorstep again!”

Decades later and half a world away, the Dolans have woven that history into their fledgling butter-making business.  Jan – a practised academic – helped structure almost two years of intensive research they conducted into a 22,000-word food plan, and together they navigated their way through the intensive compliance regulations required before they could start operating.

Now, the gleaming commercial kitchen set up in a shipping container in their garden is where they work together almost seamlessly, fitting each part of the production cycle together like cogs in a wheel. 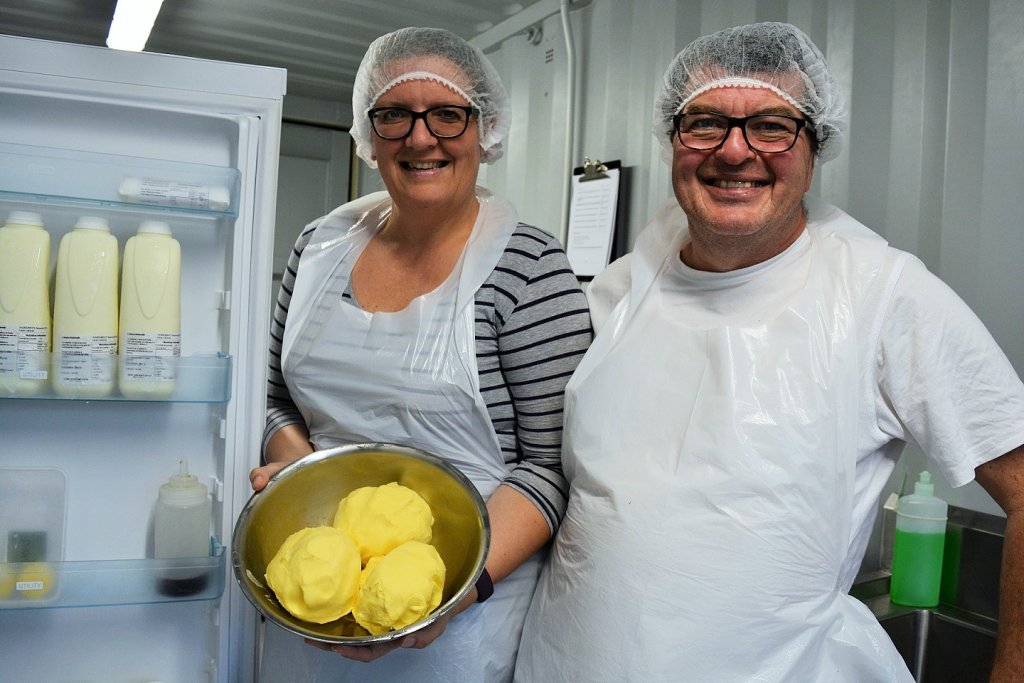 The butter they make starts with a cream purchased from a supplier in northern Waikato.  Once the starter culture is added – one that is imported from Europe and used in France – the cream sits for 24 hours and is then left to ripen in the fridge for more than a week. Once churned, the butter is hand washed and strained, the buttermilk removed and the flavours added.  There are six in all – sea salt, chilli and lime, smoked pōhutukawa, roasted garlic, manuka honey, and maple.  They add a seasonal butter to the range – currently roasted capsicum.

“We put all the goodness back into the butter,” Jan explained.  “The culture enriches the product. It makes it better and gives it greater flavour.”

The products are finding favour among buyers at the weekly farmers’ markets in both Cambridge and Hamilton, with the chilli and lime the most popular.

Steve said they now had regular clients, people who come by knowing exactly what they want. “There is also interest being shown by restaurants and we supply to one Auckland shop at the moment.  We’re really limited as to how much we can produce from our current premises. There just isn’t the refrigeration space for us to build on that right now.”

The buttermilk, thick with flecks of butter and probiotics, is also finding a ready market, particularly with restaurants.

Bellefield Butter has taken off faster than anticipated, and while they’re content to carry on as they are – experimenting with flavours and perfecting their product – they would like to expand.

The Dolan’s heritage is never too far away.  Their workspace is filled with music – mostly British radio stations playing the 80s and 90s and, of course, the Beatles – while musicians at the regular Cambridge Farmer’s Market usually play at least a couple of Beatles numbers for them. And the name of their business – Bellefield Butter – is a nod to the training ground of their sporting heroes, Everton Football Club.

“We thought its name, Bellefield – which means beautiful field – worked well. There are plenty of beautiful fields around here, and it has something of a dairy sound to it as well,” said Steve.