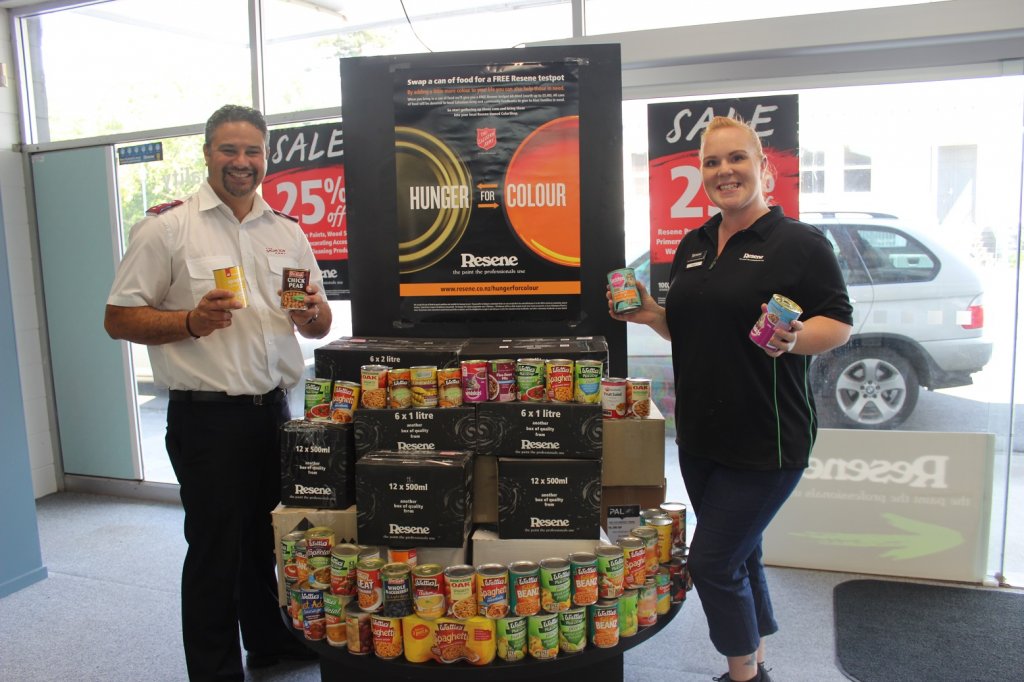 Sam Gardiner, assistant manager at Resene Cambridge, hands over the 434-can load to Shaun Baker, Captain of The Salvation Army Cambridge.

The Salvation Army received a much-needed boost last week when the local Resene colour store handed over 434 cans of food to the local food bank.

Shaun Baker, Captain of The Salvation Army Cambridge Corps, confirmed Cambridge had collected the highest number of cans in the area throughout the month of February, with Te Awamutu about 50 cans behind, then Matamata with 234 cans and Morrinsville with 84.

The initiative is known as the Resene Hunger for Colour fundraiser, which invites people to swap cans of food for test pots of paint at any of the 65 stores around the country. In the three years the initiative has run, over 110,000 cans of food have been swapped for paint – with another 37,000 cans of food collected nationally this year.

“It’s fantastic,” Shaun said of Cambridge’s big can collection. “We now have approximately 1100 cans coming into our food bank this week, that’s really good because March is the perfect month to top up our food bank again, because food comes in and goes out at the same rate… We get a lot of donations in December, but we also get hammered at Christmas time… So this fills the gap between April and going through to November… There will be a slow decline, you’ll watch it going down and down, and then December, boom, it all comes in again.

“It keeps us going with the stuff that keeps coming in weekly (from local supermarkets) … It’s like a power boost.”

Sam Gardiner, assistant manager at Resene Cambridge, was rapt to see Cambridge locals coming forward with so many donations this year. “Some people brought in several cans, and we got quite a few donations without the expectation of a test pot, so they just came in and donated.

“Some people brought in cans specifically for cats too.

“We’ve had a really good variety this year,” said Sam. “Last year we seemed to have a lot of lentils and chickpeas… We found it quite helpful with Countdown just down the road, for people who came in and didn’t know that we had the promotion going. The best donations have been the wholesome foods in one can, like soups and spaghetti.

“Variety is very good for us,” added Shaun. “You guys are awesome.”