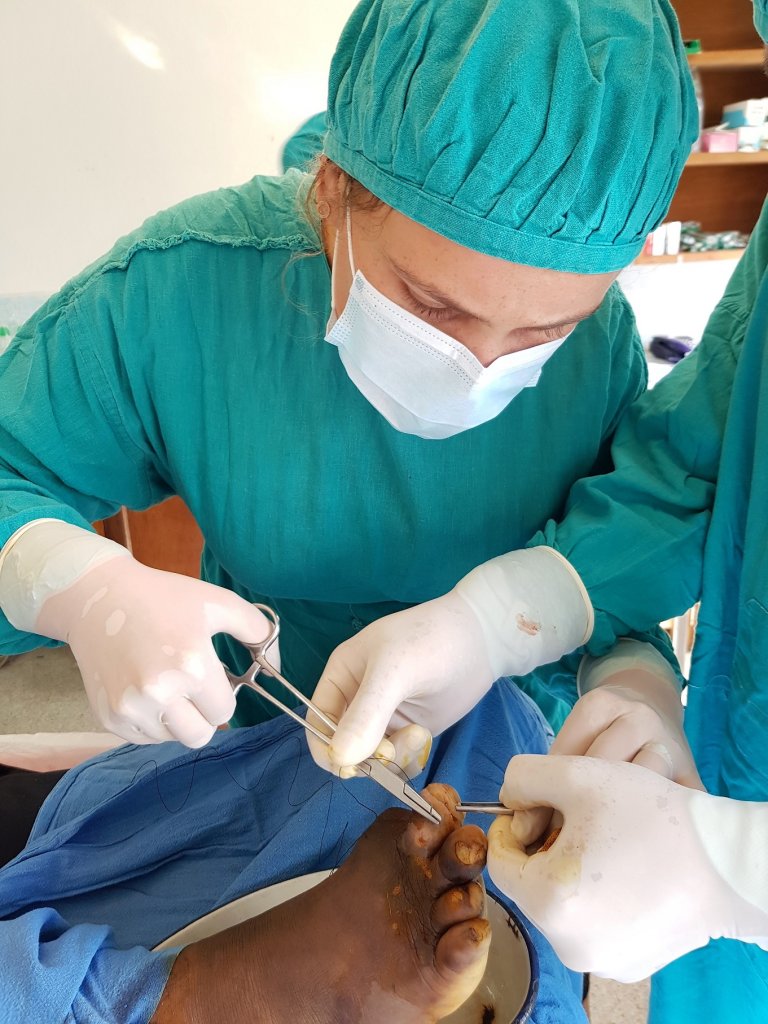 Meg was able to assist in some of the minor operations.

When Meg de Reus came home from Nepal just before Christmas, it was with a deep sense of gratitude to Cambridge and a new excitement for the future.

She was particularly grateful to the local community for having helped her raise the funds needed to support the trip, her second to the Himalayan country.  Her first was in early 2016 when she spent two weeks in Nepal as one of eight Leprosy New Zealand Mission youth advocates.

This second trip was self-funded, boosted with monies raised through a sausage sizzle and a $1000 grant from Hillary Foods, an organisation linked to the Ed Hillary Charitable Trust and one that supports causes close to Sir Edmund Hillary’s heart.  It took her back to Anandaban Hospital, just out of Kathmandu, where she volunteered as a nurse for three months. At times she travelled with the medical team deep into the country, using the vehicle the youth advocates had helped fundraise for.

“I am extremely grateful to everyone who helped get me over there; I just couldn’t have done it without them,” she said.

The graduate nurse feels she has benefitted enormously from the experience and is confident that what she has learned about herself and about others in Nepal will be useful in the job she started last month at North Shore Hospital.

Anandaban Hospital has around 110 beds, about 80 of them dedicated to leprosy patients.

“I was able to move around the wards … work across different areas such as medical, surgical and out-patients’ areas.  It was really interesting, and I have seen and learned things I wouldn’t have been able to elsewhere,” said Meg, who was able to witness complex surgeries, assist in minor surgeries and observe detailed clinic work. Nurse Meg de Reus with a couple of the leprosy patients she helped at Nepal’s Anandaban Hospital.

“The language was a barrier at times, particularly as many of the medications have different names. Also, ‘namaste’ only gets you so far, so I found myself using my phone, calling up pictures to illustrate what I was trying to say.  Later on, I started putting together a set of flash cards that I could use when dealing with the patients or their families.

“It’s common in Nepal for families to be around to do the washing and toileting of their family members who are in hospital. The nurses don’t tend to do that, which meant I was dealing with the families quite a lot.”

Meg lived onsite, trudging up and down 340 steps to and from the hospital on each shift. She was aware of local wildlife in the forested terrain, but never felt unsafe, even when she decided to go paragliding at Pohkara when there for a couple of days.

“It was beautiful, and terrifying” she laughed.

She honed other Nepalese skills this time around, becoming more comfortable with bartering for anything she wanted to buy, and growing to love the traditional dal baht and chow mein everyone ate daily.

Now, as she settles into a more traditional job here in New Zealand, Meg isn’t sure she is finished with Nepal just yet. She loves its combination of chaos and calm and is certain she will end up back there one day.