His hooves are incredibly hardy.  His rock-star mane has to be wrestled into plaits.  While other horses eat grass, he happily munches on thistles.

But his Cambridge owner Georgia Bouzaid wouldn’t have it any other way, saying the quirks of her Kaimanawa pony’s unique breed are what make him so special.

“He does what he wants, but it’s kind of best to just let him, and when he goes into the ring he knows his job,” the 15-year-old St Peter’s School student said.

“Even if it doesn’t turn out how you planned it, next time he just goes in and tries harder.  It’s like he doesn’t give up on you, he’ll just keep trying.  He has a massive heart.”

Since meeting in 2016, Georgia and Bill have formed an incredible bond, exploding onto the New Zealand show jumping scene in January 2017 by winning their first pony grand prix on debut.

Over the past year they have galloped up the equestrian ranks, their astonishing run of form singling them out as “real contenders” for the Pony of the Year title at this year’s glitzy Horse of the Year (HOY) show in Hastings from March 13-18.

However, disaster struck in February when Georgia was hospitalised with a serious viral illness that ruled her out of the event.  Olivia Apatu went on to win the coveted title on Alasaan Arzu, bred out of a Kaimanawa mare.

After working so hard to get to HOY – the most prestigious equestrian event in the Southern Hemisphere – Georgia was devastated. 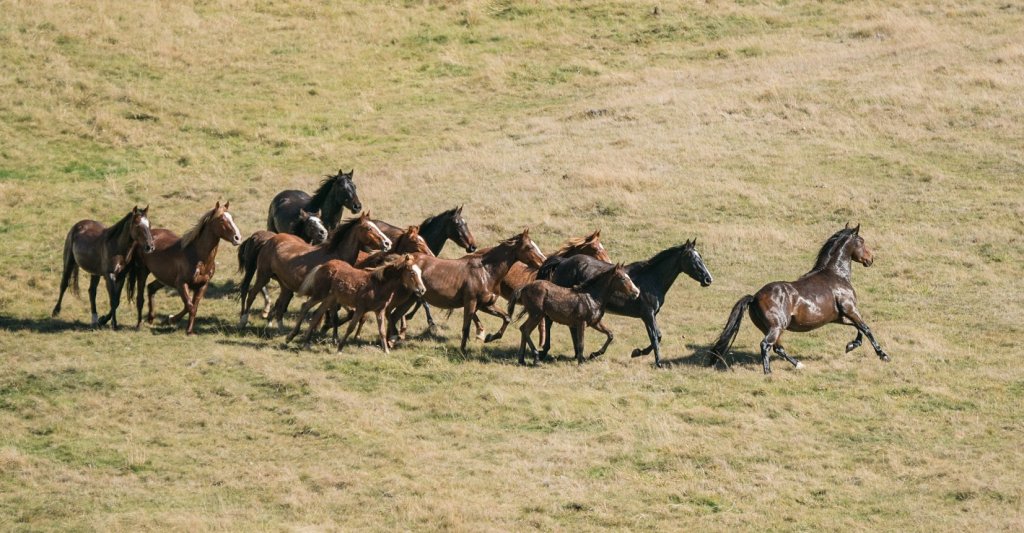 Action from the 2016 Kaimanawa muster in the central plateau.

“It’s pretty gut wrenching…but we’re lucky that she has two more seasons on her beautiful pony,” her mother Kelly said.

“Next season she’ll be out there all guns firing.”

Georgia and Bill’s success over the past two seasons saw Kelly, Georgia and her sister Senna (12) uproot their life on Waikeke Island late last year and move to Cambridge to be more central to equine events and opportunities.

“For me I’ve seen a combination of Bill and Georgia performing at top level and the determination, commitment and career aspirations show a real opportunity to succeed,” Kelly said.

“And you always have to believe and support your kids’ dreams.  So here we are, happily.”

The move enabled the family to buy a 2.1-hectare property complete with basic equine facilities, which they plan to develop, and Georgia now has her sights set on a professional show jumping career and competing at the Olympics.

Thanks to Georgia’s stellar sporting pedigree, she “certainly knows the ethos to competing in an international arena”, Kelly said.

Georgia’s grandfather, Chris Bouzaid, put New Zealand on the international yachting map when he won the One Tonne Cup in 1969, and her father Richard won the America’s Cup in 2003 with Alinghi.

But for now, Georgia’s main goal is to focus on recovering from her illness, so she can get back on her beloved pony Bill.

With the 2018 Kaimanawa muster rapidly approaching, she is encouraging others to consider adopting a wild horse.

“There are Kaimanas throughout all the disciplines,” she said.

“They’re just such good all-round ponies and they don’t give up.  When they’re tired they keep going because it’s survival and that’s what they’ve been bred to do.

“It might be a longer process getting them to competition level, but it’s so rewarding knowing you’ve saved another life.”

According to Kaimanawa Heritage Horses (KHH), a charitable society run by a “volunteer group of passionate horse people”, horses were first recorded in the Kaimanawas in the 1870s, but by 1979 only 179 remained, prompting the establishment of a protected area for them in 1981.

However, by the 1990s the population had exploded, creating feed shortages and threatening ecologically sensitive areas.

In a move to improve the animals’ health and protect the environment, the Department of Conservation (DOC) began mustering the wild horses.  In 1997, 1100 were removed from a population of 1700 and although many found homes through public auctions, a large number were sent to the abattoir.

Today, thanks to the efforts of KHH and high-profile New Zealand equestrians including the Wilson sisters, on average two-thirds of horses are now saved from slaughter and re-homed.

For more information about how to adopt a Kaimanawa horse visit www.kaimanawaheritagehorses.org.