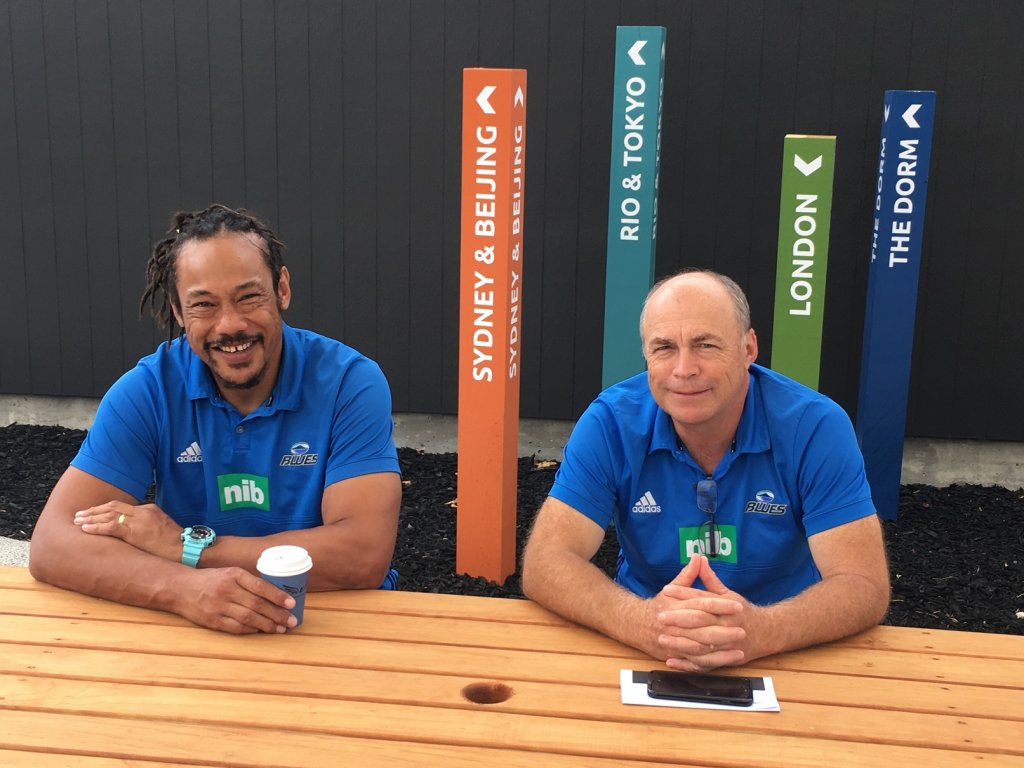 The Auckland Blues training squad hit town last Monday, staying at the recently-opened Podium Lodge on Peake Rd.  With 54 players and 16 support staff, the lodge was buzzing this week as the rugby players began a five-day camp to prepare for their first preseason game on Friday night.

Friday night’s match will be in Te Kuiti against the Chiefs, and Blues head coach Tana Umaga explained that Cambridge was the ideal staging point for the team to prepare.  “The whole idea was to get a little bit closer to Te Kuiti,” he explained, rather than travelling down by bus on the day of the game.

During their week at the lodge, the team would be using the high-performance gym at the Avantidrome, as well as training on the Hautapu Rugby Club’s number one field, which is watered.  They may also use the fields at St Peter’s, Tana said.

Also on the agenda for the Blues this week was some team building in Rotorua, using the high ropes and other group activities to get to know each other.  “It will be interesting to see how people react,” said Tana, adding that there are quite a few new players in the team.

Also staying at the lodge at the moment is the canoe racing women’s team, including Olympic medallist Lisa Carrington.  Podium manager Anne Edgecombe said this week was a perfect example of high profile sportspeople mixing at the lodge.  “They are athletes who may not even cross paths…All Blacks staying with Olympic gold medallists….it’s a real little hub of interesting activity this week at Podium,” she added.

Completed just before Christmas, Podium Lodge had its official opening on January 1.  Owned by the Brian Perry Trust, all profits from the lodge will be channelled back into the community through the trust’s Good Sports Programme, Anne explained.  “It’s all about purpose, not profit.”  The exact structure of the programme is still being refined, but the money will be distributed in the Waipa and Waikato regions, she said.

With a maximum occupancy of 86 people, the lodge is made up of a 14-bed dormitory, six two-bedroom apartments and 24 studio apartments configured into hubs which are named after Olympic cities. Then there’s a central hub, with a lounge and communal dining area where the guests can mingle.  The spaces seem quite flexible, with leaners and tables moved to accommodate the guests, and Anne said it’s been interesting to see how different groups have made the space work for them.  “It’s been really exciting to see how it’s been used…it’s been seamless,” she said.

Construction started last June, and the builders worked through the excessive rain to get the project completed on time, she said. “It was a three-year journey from concept to reality,” Anne explained.   Built at a cost of around $6M, the lodge sits on 1.87 hectares on Peake Rd, just out of Cambridge and has a real rural vibe.

Even though the facility has a sporting theme, Anne said anyone can book and come and stay at the lodge.  And those who do might just get to see some All Blacks or Olympic gold medallists.  You just never know.