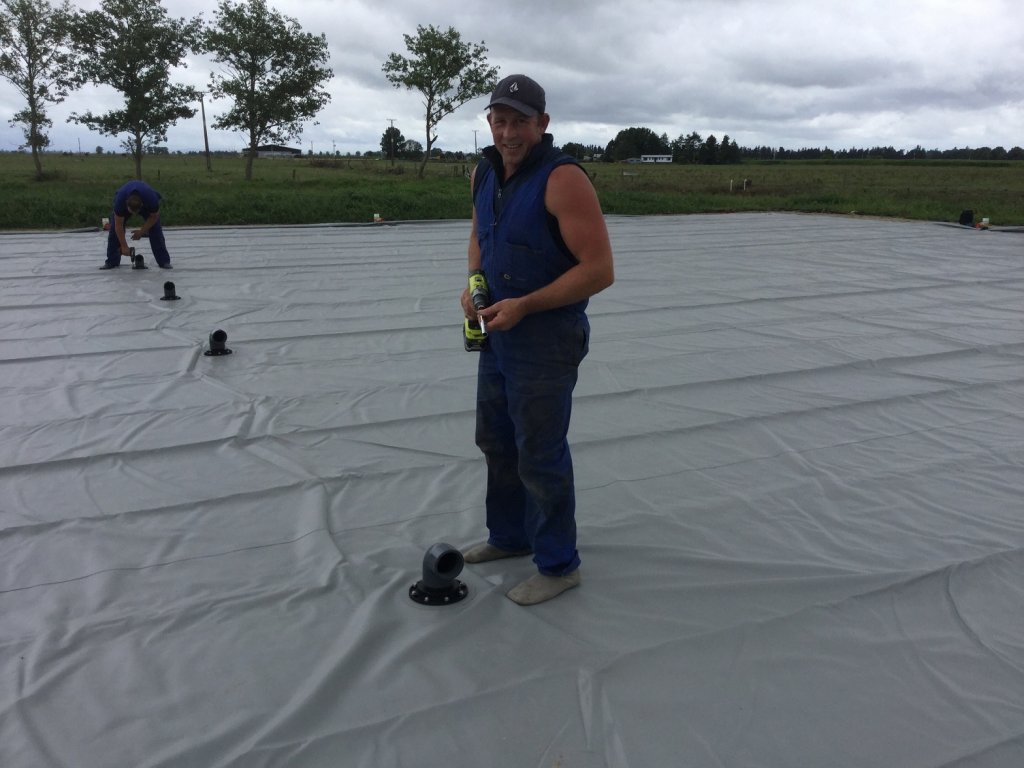 Jonny Douglas from JD and RD Wallace said the Flexi Tanks are a good option for peat farms.

The rain held off while the first one million litre Flexi tank in the country was rolled into position on Friday.  Weighing in at 2 tonnes, the tank is a flexible bladder made from seven layers of warp and weft of technical fabric, with a tensile strength of 450kg per 5cm, meaning it won’t rip.

Compete with inlets and outlets and 14 stirring valves every seven metres, the tank is self-agitating and once filled it reaches a height of 1.6 metres.  The tank took a crew of 14 an hour and a half to install on the paddock, sitting on a sand base.

Jonny Douglas, who oversees four JD and RD Wallace farms in Cambridge, said the flexi tank was the ideal solution for Mooloolaba Farm, which is on peat.  The high-water table and peat soil on the property, 10 minutes out of Cambridge on the way to Te Awamutu, makes it difficult to install a traditional effluent pond, he said.  “With farms on peat, building ponds is not easy or cheap.  You need to import clay, and because you can’t dig into peat the pond needs to be above ground level,” Jonny said. “This is a great option for farms with no clay.”

Because the Flexi Tank is self-contained, there is only a requirement for stock fencing, not the usual extra fencing to prevent accidental drownings.  There’s also no need for OSH compliant signs, and it doesn’t need resource consent. Anton Meier from Flexi Tanks said doing away with the pond consent alone could save the farmer $30,000 in fees.  Plus, you can depreciate it at 26 per cent each year as it is a tangible asset that can be rolled up and sold if required.

Anton also explained that because the effluent is undiluted by rain and is not evaporating in the tank, spreading it on their farms will also cut down their urea bill, because much of the nitrogen will remain intact.

Jonny said in February a three-day sump with a stone trap to catch solids will be built, with the resulting solid material drying out and taking on a sandy consistency similar to compost.  The resulting liquid would be transferred into the tank, awaiting distribution onto the land.  Normally this would happen in August and September, he said, with effluent pumped straight out onto the farm for the rest of the year provided conditions were not too wet.